SWTOR operation boss guide for Thrasher, the third boss in Scum and Villainy, a new Level 55 operation located on planet of Darvannis.

Thrasher is a really simple “Tank n Spank” boss with some added mechanics to make the fight interesting.

Thrasher should be tanked against a wall due to his charge/knockback ability. He also have a conal attack called Stomp so do not face him towards the raid. It is advised to not tank him against a gate as the tank can get punted inside the gate and have the fight bug out. 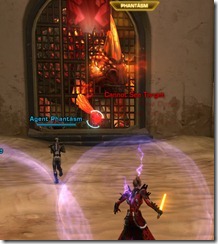 Throughout the fight, you will hear Bo Zarran say You’ll like this trick. Been working on it a while. That is an audio cue for three snipers that will spawn in a group along the walls (location seems to be random). These guys have 22k HP each and don’t hit hard. You can leap to them or grapple them down for melee DPS to kill them. While these guys are mostly a pushover, they can build a turret if not killed quick enough. This turret, once built, will basically target random raid members and hit them for 20k damage over and over, causing a raid wipe.

One interesting thing to note is that there are health thingies you commonly see in warzones along the ledges where the snipers spawn. This allow melee characters who can leap up there to grab them while killing the snipers.

Tip: Use your minimap to look for red dots when you hear the audio cue. This will allow you to quickly locate them. 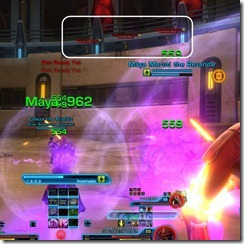 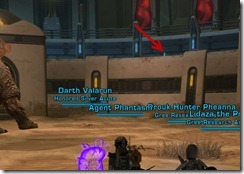 Other than snipers, one random member in the raid will get targeted by a Mercenary Firebug. This person will have a blue circle underneath them, which is very easy to see. They will need to run away from the raid, onto the side of the arena. The Mercenary Firebug will run to them and drop a flame turret on them, engulfing the area in flames. These flames don’t cover a huge area but they don’t disappear. 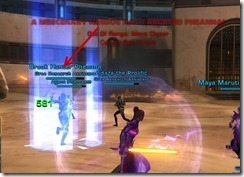 After you defeat Thrasher and open the gates, you get to fight Bo Zarran himself. He is guarded by two Mercenary Heavy Gunner, both of which can be crowd controlled. Pull him to a corner and then basically tank and spank him. He doesn’t do anything fancy and is a huge pusherover. Doesn’t drop any loot either. 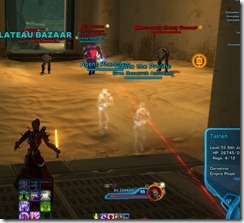 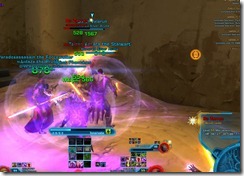 Thrasher on hardmode have some new mechanics that turns the fight from a stationary one to one with lots of movement.

The first thing to note is that in addition to the three snipers, there is also a Demolitionist on the side that do a lot of AoE attacks on the raid. Melee DPS cannot leap the the snipers right away due to their shield but they can do so to the Demolitionist. In addition, this guy does not have a protective shield and cant be damaged right away so he should always be killed first. 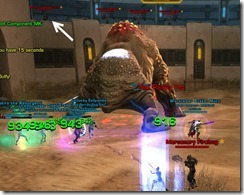 All snipers have a shield that blocks most of the incoming damage when they spawn. This shield can be only removed by Thrasher’s Roar, which is a channeled AoE attack that deals 1-2k damage per tick. Tanks need to move Thrasher near the Snipers so his Roar affect their shields. Shields goes down as soon as Thrasher starts his channel so you don’t need to wait for the channel to finish to kill the snipers. If you are having trouble getting the sniper’s shield off w/ Roar, you may consider leaving a tank and melee DPS up there for full time sniper duty. 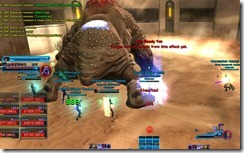 Prior to Roar, Thrasher will also punt whoever in front of him up in the air so tanks should use this opportunity to get knocked into the snipers and taunt them. It is therefore very important to move Thrasher to the wall undernearth the snipers as soon as they spawn. Have Thrasher face the snipers so the tank gets punted up to them and have the offtank immediately taunt and face Thrasher sideways after the Roar so that healers can get in healing range of the tank and melee DPS up on the wall without getting damaged from his frontal Stomp. 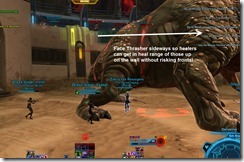 Failure to kill the snipers before the second group of snipers spawn will result in a wipe as the snipers will construct a turret that basically one shot everyone in the raid.

“Thrasher will immediately reset when this happens and your tank cannot get out.” — our tank did this and he could still tank him there and the boss didn’t reset.

Depends on your luck I guess. Our tank couldn’t get out and Thrasher reset right away.

hey dulfy yesterday i did this boss on PTS with PTS guild it was soo fun the tactic is like this : 1 of us goes inside and hits boss( dps preferred) others stay out the boss will walk trough the door and he can be kited inside the pit that u encounter before boss(last pack of adds) u just kite him inside the hole and boss is dead ( and lootable too ) in less than 20 seconds …. xD

We actually beat it on HM this afternoon with a group mostly from BC. I cant tell you about the first two on HM since i was brought in at this boss, but there are two big differences. The snipers get a hunker down ability that melee gap closers and pulls don’t work on. the tank needs to go to and tank at the wall the snipers are at. After the knock back he will cast a channeled ability called “Roar” 4 times, one for each sniper as there are 4 instead of three, the Roar, from what we saw knocks out the the shield ability allowing the snipers to be killed. Also the tank if not directly on the wall can get knocked up onto the platform, receives a damage increase buff, and help kill the snipers and then the off tank taunts after the roars are done. Second big thing is that if u let 2 groups of snipers live you get Defensive Protocols which is INSTA-ENRAGE with the turrets and the raid is a wipe at that point with no way to recover. Hope that helps!!

cool thanks for the info

Yah we had the MT get knocked up there and swapped. There is one guy that Mara’s etc can leap too, the other 3 are hunkered down. Interesting tip on letting the roar hit them, but if you poorly place the roar, it is still doable.

We did something really odd, partly because we didn’t know about Roar, but what we noticed was Thrasher’s little charged attack can knock more than one person up to the top, so we had one tank, one healer (sage, in case someone didn’t make it so they can be pulled), and the two ranged dps get knocked up there and essentially split the raid into two groups, one for taking out the snipers and the rest focus on the boss. When the snipers were downed, ranged would focus the boss until adds came back again. Maybe not quite how it was meant to be done but it worked!

On SM at least, it seemed to be that the Turret the Merc Firebug drops down damages Thrasher as well.

Any tips on jumping onto the Demolitionists? Seems to be our problem

I asked our DPS and they said you have to leap diagonally to the demolitionist since there is a little bump in front of them that blocks your LOS. Failing that, you can just wait for shields on sniper to come down and then leap.

Or you can just stand in front with the tank and get punted up.

Thanks Dulfy I’ll put that into practice (Y)

Noticed that Trasher gives the tank a buff to his damage called Frenzy, which lasts for 20 seconds. After that, Trasher gains this buff. I don’t know when during the encounter that this happens though. Also, I saw it in 16-man, haven’t seen it happen in 8-man before. If he uses Swipe during that buff, the tank will be hit for almost 20k damage.

Anyone have more information on this? Tanking thrasher as a shadow/ssin tank during swipe you get hit for 23k damage which makes it nearly impossible to keep alive the whole fight even with 2 healers on you (in 16 man Hard mode). I’ve had ZERO problems tanking him in 8 man hard mode so I’m wondering what the deal is here…

I’ve noticed this tanking it in sm. It honestly seemed simply like a way to be able to beat enrage timers with dps who are spending 90% of their time on adds. Could be same idea for hm, just alternates between tank and the boss? I don’t think the boss ever gets this buff on sm, so might just be a tweak to still give tank bonus damage, but also make him take more?

Has anyone experienced difficulty with knocking the shields off the snipers? Our tank has had trouble getting the boss to the snipers for the roar, and then even sometimes when the boss is looking right at them, right next to the wall, the shields don’t come down. This a bug, or is he doing something wrong?

Try having one or two of your DPS stay on the wall and just go around killing the snipers if your tank is having trouble positioning the boss and getting the shields knocked off.

Wouldn’t be able to dps the snipers if their shields are still up though. Get “absorbs” constantly until they go down.