SWTOR operation boss guide for Titan 6 , the second boss in Scum Villainy, a new Level 55 operation located on planet of Darvannis. Both storymode and hardmode guides are available.

Titan 6 is a huge robot that specializes in Regional Annihilation at Reasonable Rates. This fight has a lot of raidwide AoE damage, something the healers should be aware. The fight is divided into two phases. Phase 1, which is from 100% to 20%. Phase 2, starts from 20% and is a soft enrage phase with constant AoE damage. Phase 1 is further broken up into bits in which the entire raid must hide behind rocks to avoid the massive explosion from Titan 6’s rockets.

Phase 1 basically repeats this attack sequence over and over.

This is an unavoidable raidwide AoE damage for 6 seconds.  It ticks for 1.5k every second for about 9-10k damage in total. While Titan 6 channels this ability, everyone will get hit by missiles. This is an AoE attack so the raid should spread out while this attack is being channeled to reduce the overall raid damage. Group can stack up for heals after the channel has ended. You can also lessen the damage you take by running around during this phase.

When starting this attack, Titan 6 will announce – Initiate defense sequence two! both as an audio cue and also in your chat window.

This attack comes in between Lots of Missiles. It it a 2 second cast that spawns red circles on the ground that can be easily avoided. After the red circles disappear, two Titan Probes will also spawn from under the boss that will need to be killed. 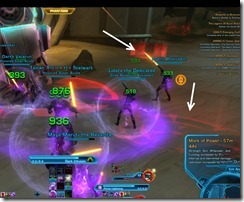 Launch comes immediately after the second Lots of Missiles attack. Titan 6 will announce this attack as Initiate defense sequence three! Launch is a 8 second ability. At the end of the cast, Titan 6 will fly up in the air and the ground will be engulfed in flames. You must take shelter behind the rocks (running to the orange spot behind them will automatically put you in cover) unless you can take 21k damage or have abilities that make you immune to damage like Sorcerer/Sage’s Force Barrier.Note that you can use your abilities while under cover but you won’t be able to move. 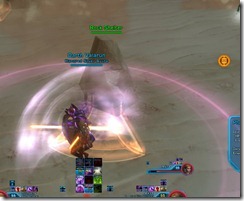 When Titan 6 lands on the ground, six Titan Probes will spawn and must be dealt. Each of them have around 20k HP.

Phase 2 is a soft enrage mechanic. Once Titan 6 hits below 20%, he will drop down on the ground via an attack called Explosive Charge (deals around 7k damage). From here on, he will bombard the raid with Missile Burst which hits for about 2.7k damage every 3 seconds and sprays those around him with Flame Burst,  a proximity based AoE attack that deals 3.6k damage every couple of seconds. There are gaps in the fire circle where melee DPS can stand and not take damage from Flame Burst. 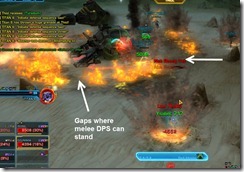 You do not want to stack together for this phase as Missile Burst is an AoE attack like Lots of Missiles and will cause stacked players to take much more damage.  All the ranged DPS and healers should be spread out and standing away from the fire circle.

From this point on, this is mostly a race to kill Titan 6 before the raidwide AoE damage overwhelms your healers.

As can be expected, Titan 6 deals a lot more damage on hardmode. This means that you should always spread out for Lots of Missiles. It deals about 2.6k damage every second for 6 seconds (~16k damage in total). Running around during this phase to lessen the damage isn’t ideal as you risk running into other players and compounding the damage.

In addition to the increased damage, there are a few new mechanics for hardmode.

Basically a tank swap mechanic. After the Airstrike attack, Titan 6 will lob a huge grenade to the tank with threat. This tank will receive a giant red circle undernearth them and will need to run away from the raid while the other tank taunts Titan 6. Tanks will need to be topped off or use a defensive cooldown to survive this. Anyone else caught in the red circle will mostly likely die without a defensive cooldown as the attack deals ~32k damage to non tanks. 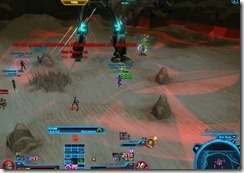 Only one person can hide behind each rock during Rocket Launch and the launch sequence is a lot faster. Therefore, everyone should be moving toward a rock during the second Lots of Missile attack to ensure that they can find an unoccupied

To ensure maximum DPS on Titan 6, everyone should be running to the boss when he lands from Launch and spawns the probe droid adds. This will group all the adds on top of the boss and allow DPS to use AoE attacks to damage both the boss and the adds at the same time.

Remember that there are gaps in the flame circle that melee DPS can stand to not take damage from Flame Burst (~5k). Everyone will be taking AoE damage from Missile Burst and should be spread out to minimize damage. Titan 6 will grapple ranged players into the fire circle periodically and cause them to take Flame Burst damage. Make sure to run out quickly when this happens to lessen the damage.

This is a strictly a burn phase so any adrenals or DPS cooldowns should be saved for this phase.

quote: Titan 6 is a huge robot that specializes in Regional Annihilation at Reasonable Rates.
lol, rent-a-giant-robot?

Yup, it is Rent a Cop for the Hutts

Dulfy – thanks for the guide. Just as an fyi, defensive sequence two (lots of missiles) does more damage to the group when everyone is stacked up. My group seperates during lots of misslies to minimize damage and then stacks up for AOE heals directly after.

Yup, we just did this boss again and noticed that. added that part ty 🙂

One other tip we came up with – since any number of people can go behind a single rock on 8m SM, we like putting a revivication on a single rock and stacking on it before Launch, since we lose the stacking time after the second Lots of missiles. It worked really well for us and helped top us off,

The biggest tip I can give for this on HM. No sharing of rocks on Seq. 3. Seq 2 will happen two times each rotation immediately followed by Seq. 3. During the 2nd Seq 2 immediately start taking cover at your own rock. The only other thing I remember offhand is a grenade that happens after air strike and usually lands on the MT (Best guess is aggro based). He can simply back away from the raid, we tank swapped during this just to make it easier and swap DC’s.

This is an unavoidable raidwide AoE damage for 6 seconds. It ticks
for 1.5k every second for about 9-10k damage in total. While Titan 6
channels this ability, everyone will get hit by missiles. This is an AoE attack so the raid should spread out while this attack is being channeled to reduce the overall raid damage. Group can stack up for heals after the channel has ended.

When starting this attack, Titan 6 will announce – Initiate defense sequence two! both as an audio cue and also in your chat window.
”

Not true, its totally avoidable.
Consulars can Force Speed
Sentinels can Force Camo
Smugglers can… probably do something lol

Anyway, the damage is avoidable by just keeping on the move and use a few speed boosts.

Ok worded this a bit wrong (6 in the morning lol)

With not true I meant that getting hit by missiles 😛

In hard mode, we noticed a mechanic where the tank gets slammed in place, gets a debuff and can’t move for a period of time unless they have a CC breaker.

We’re getting a HM mechanic where the tank gets affected by Bury, right before the first lots of missiles. He can use his stun break but then it’s not up for the next time he is on the boss (after swap). Anyone know how to cope with this?

We’ve been tank swapping at that point, and once the tank is “un-burried” swap back.The tank that was un-burried will then get the grenade, and then will taunt back once the bosses position has changed.

When I did this in 8m SM with my guild, we easily made it to phase 2. However, instead of missiles that deal 2.7k damage every 3 seconds he starts spamming missiles that deal 10k+ damage every 3 seconds even though we are spread out and melee are standing in the fire gap. Obviously, we wipe because healing triple the normal damage is a no-go. 😀 Does anyone know what we are doing wrong?

Sounds like you hit the enrage timer then (yes he does have an enrage timer, we hit it too)

Thanks. Do you know if the enrage timer counts over the whole fight, or just the phase 2 part?

Whole fight. You getting close to it if he is at the area where the group enters the arena