Cartel Warlords is basically a group of 4 bosses: Vilus Garr, Captain Horic, Toraga, and Sunder. The fight isn’t particularly hard but the surviving bosses do gain additional abilities as each warlord is killed.

The suggested kill order is Vilus Garr <–> Captain Horic –> Tu’Chuk <–> Sunder. The raid should focus DPS on one warlord at a time as these guys heal up if they get significantly injured when the other warlords are killed. 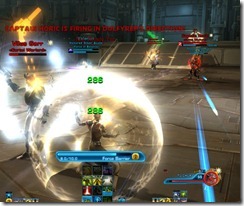 Both Vilus Garr and Captain Horic have taunt immunity so they cannot be tanked and must be killed quickly. Sunder and Tu’Chuk can be tanked. Sunder tank can  kite Sunder around and make sure they are the closest person to Sunder due to his Fixate ability (he will fixate on whoever is closest to him and follow them). If Sunder fixate on a DPS or healer, he can be taunted back onto the tank. Sunder doesn’t activate his Fixate ability until one of the warlords is killed. Tu’Chuk can be tanked normally but once one of the warlords is killed he will perform knockbacks and immobilize on the tank.

Vilus Garr isn’t too much of a threat. He has an Explosive Surge ability that deals around 3.7k damage and pops in/out of stealth constantly. Captain Horic is much of an issue due to his Spray and Pray ability that deals 3.4k every second for 5 seconds if you don’t move out of his conal.

All DPS and healers should form an arc around Captain Horic so that if someone get targeted by Spray and Pray they can move and not get the rest of the raid sprayed (the conal stays fixed in a direction once the channel starts so you can move out of it), You will know who receives the conal as there will be a red text message on the screen.

If Captain Horic is killed first, Vilus Garr will gain the ability to grapple players to him before throwing down the Explosive Surge.

Once Vilus and Horic are dead, phase 2 starts. Tu’Chuk’s tank will need to becareful to not have their back near a wall as the walls actually put a debuff on you called Near Wall that basically stun and hurt you if you get knocked into it by Tu’Chuk.

Meanwhile, the Sunder tank can keep kiting Sunder around and get ready for phase 3, which begins once either Tu’Chuk or Sunder is killed. 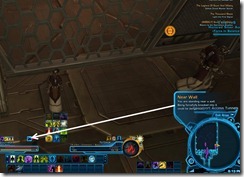 Once Tu’Chuk or Sunder is killed, three champion Cartel Lieutenants will spawn and they cannot be taunted. The remaining Warlord will gain additional new abilities.

Sunder, if left alive, will now cast a 5 second ability called The End. This attack deals massive single target damage to the target with threat (i.e. the tank) but they can survive through it if they have a defensive cooldowns. 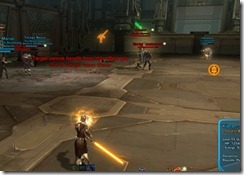 Tu’chuk, if left alive, will gain a stacking buff that increase his damage output and this phase becomes a burn phase to kill Tu’chuk before he gain too many stacks. You can ignore Cartel Lieutenants and just focus on Tu’chuk.

Hardmode doesn’t have any noticeable new mechanics compared to storymode. As expected, all of the bosses do much more damage and have more HP.

Captain Horic’s Spray and Pray is quite deadly in hardmode and can quickly kill someone if they don’t move out of it fast enough. If Horic is killed first , Vilus Garr gain the ability to grapple other players to him to deploy the AoE Explosive Surge (hits 6.6k on hardmode) but it can be easily healed through.Whoever you kill first will depend on your raid group but I personally had an easier time killing Horic first as Vilus Garr was not hard to heal through.

Horic may also have an AoE DoT (looks like Corrosive Grenade – green icon) that should be cleansed.

If your raid have enough DPS, Sunder should definitely be killed first. With just Tu’Chuk remaining, the fight becomes a DPS burn and you can pretty much ignore the Cartel Lieutenant adds that spawn (they don’t do a whole lot of damage). Tu’Chuk’s damage isn’t much of an issue until he gains 10 stacks. From 10 stacks on, he will likely 2-3 shot a tank so defensive cooldowns should be used.

Lacking DPS, Tu’Chuk can be killed first but you will need to deal with the Cartel Lieutenants and Sunder’s The End ability which is a bit harder to manage but doable if you have shadow/assassin tanks with shorter defensive CD cooldowns.