SWTOR operation boss guide for Dread Master Styrak and Kell Dragon the seventh and final boss in Scum Villainy, a new Level 55 operation located on planet of Darvannis. Both storymode and hardmode guides are available.

Dread Master Syrak is a whole orchestrated fight with four phases. The fight isn’t very hard for the last boss of the operation.

In phase 1, you raid will be pitted against a huge group of Dread Guards. There is no need to worry though as huge group actually pulls separately into smaller groups of 1 Dread Guard Officer (elite) and 4 Dread Guards (strong). Just pull one group and the other groups will come automatically when the previous group is killed. 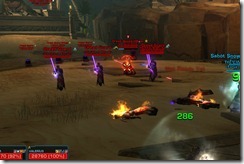 None of them are hard to kill due their HP. The Dread Guard Officer does heal for quite a bit so make sure to interrupt him or kill him first.

In Phase 2, you will be pitted against the Kell Dragon pet of Dread Master Styrak. Do not attack Dread Master Styrak while in this phase or he will one shot you. Do not wander near the throne area either as there is an invisible line that will kill you if you cross it. 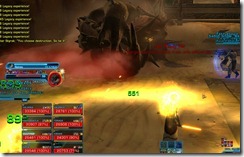 When the Kell dragon gets low, an apparition of Dread Master Styrak will spawn and channel a stun on the tank currently tanking Kell Dragon. You will need to do a tank swap here and kill the apparition. 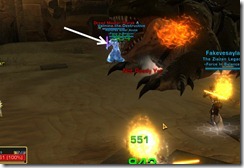 When the Kell Dragon is about to die, bubble your raid for the Force Storm that Styrak will cast during the transition between Phase 2 and Phase 3.

Dread Master Styrak will announce his arrival by Mass Force Storm. This is a 7 second AoE attack that deals 1k damage per second. The damage is fairly small but the raid should still stack up to heal. 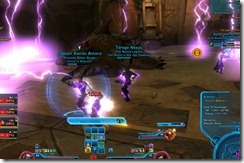 Styrak has quite a few abilities at his arsenal. There doesn’t seem to be  a sequence in which he use these abilities. 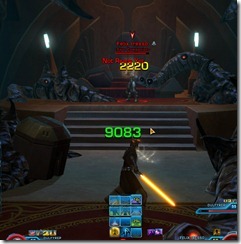 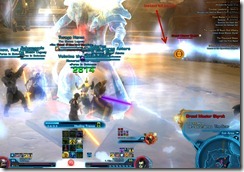 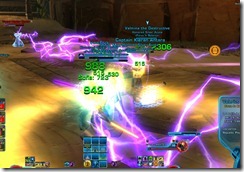 When you get Styrak down to 10%, he will revive the Kell Dragon you just killed and become immune to damage. This Kell Dragon dies a lot quicker than before (takes increased damage) but does a constant AoE called Power of the Master that deals around 1k damage every 2 seconds. You shouldn’t have much trouble dispatching the Kell Dragon quickly.

After you killed Kell Dragon, Styrak will come back with some new abilities. He will use his Saber Throw and Force Charge (huge knockback) on random raid members. These are all high damage instant attacks (Saber Throw deals ~6k damage while Force Charge deaks ~10K) designed as a soft enrage mechanic.

Hardmode doesn’t have much new mechanics compared to storymode but the tight enrage timer and the high incoming damage will cause groups to do things a bit differently.

The biggest thing groups will notice in hardmode is the Spines attack. This attack now deals much more damage in hardmode (~7k damage every second) and will require the raid to move behind the tank and use the tank as a human shield to absorb the damage. Sorcerers/sages can also use their Force Barrier to block this attack as well. 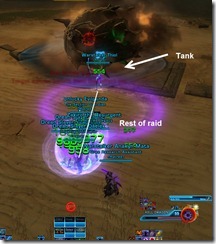 The ghostly apparition of Styrak spawns a lot more often so you will need to kill them quick and tank swaps a lot more. There might be a special version that channels Charge on to the dragon to increase his damage so you will definitely want to eliminate him ASAP. 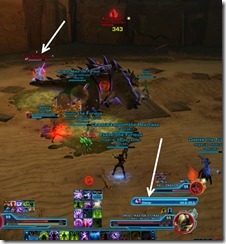 For the four Lighting Manifestations that spawn after the big Chained Manifestation, it is helpful to have DPS pre-assigned to each manifestations so that DPS can engage them immediately and not waste any time. Be sure there is a player next to each Manifestation so they don’t damage rest of the raid standing in the middle. 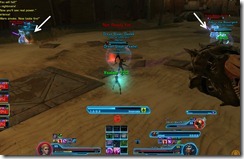 As soon as the reanimated Kell Dragon is killed, you will want to drag Dread Master Styrak towards the entrance so the raid can place their back against the wall. This way, if you do get pushed and survive the attack, you are not out of DPS/heal range. If you do hit enrage here, his Saber Throw will one shot anyone that is not a tank (~32k damage) 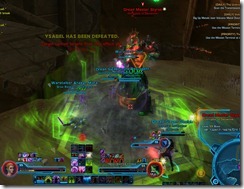 Anyone experiencing some issues with the last phase of this fight? Our dps was fully itemized and we pushed him to the last phase in less than 6 min, but his last phase was buggy and we got a crap load of adds and it wiped the group.

When my guild attempted this fight, during the Nightmare Phase, we did not need to kill our companions. There was a exit area button that appears right next to the door behind you when you spawn in. It looks like an elevator button. There was no negative effect that we observed while using it. This was done in SM.

Also during the first phase you can have your group hide behind a pillar that is to the left of zone in. You can use it to LoS the groups as you pull.

What is the enrage timer?

Great guides as always! We did Story Mode last week totally blind, but I read to see what we missed. I shadow tank and noticed the Kell Dragon in Phase 4 puts a rapidly stacking debuff on the tank that I believe caused increased damage. It falls off quick but necessitated a pretty frequent tank swap.

Anyone else have Nightmare Manifestation just not work on them? It’s only had me fight Nadia once, every other time I would just be stunned for a couple seconds, the screen would black out, then I’d be back in the fight. I seem to be the only one in my guild that this happens to.

“When the Kell dragon gets low, an apparition of Dread Master Styrak will
spawn and channel a stun on the tank currently tanking Kell Dragon. You
will need to do a tank swap here and kill the apparition.” Actually, this happens shortly after every Spines.

when does they enrage timer start

I was instant killed by something called “Obliterate”. It was one of the adds that spawn after lightning manifestation.

Ya that can happen sometimes if the DPS the add is “connected” to is too far away from the add.

We allways fail on HM at 6% due to enrage. What can we improve to get him down? Our dps is near 2,3k. Our healer do also 5% dmg during the fight.

One thing we did initially when we had enrage issues was to save all the big attacks (i.e. orbitals) for killing Dread Master itself and not any of his projections etc., You can sort of pre-orbital since you know where he is going to be. Also make sure everyone have adrenals etc. We spent a ton of money initially making sure everyone had adrenals to use.

Thank you. We will try to coordinate our big attacks than.

We managed the enrage issue by using adrenals and big attacks at the
beginning on kell dragon and than on styrak special after defeating the
fore adds. Because there is the longest time where Styrak is available.

Where is the crumb that leads to this mission start

Hey Dulfy any word on the NIM guide timelines !!?!!?

It will come soon, still working on 3rd boss

awesome glad to hear, need something to read and study at work 😀 how are they feeling so far, is the jump as big as TFB was ?

First two bosses are alright, 3rd is a bit rough but not as hard as DG

Hey me and my guild are trying Dreadmaster for the 1st time on HM, we got him down to 18% before the enrage and I am just wondering is his enrage timer just to the end of phase 2 or is it for the entire encounter?

So does that include the 16 adds at the start. We usually kill them then /stuck to reset fight leaving only 1 row of adds and saving us at least 1 min. But some ppl have said the enrage timer only starts from when Dragon spawns. Can someone clear this up

wondering if there is a limit as to which companions you might have to fight, like class story specific companions or do they include HK/Ship droid/treek?

Eh I always got Andro. Reveal on my sorc.

It always seems to be your romance companion (even if you’ve not done the romance conversations), for example male Jedi Knights will always get Kira, female Knights will get Doc everytime

Not tonight. As a Guardian, I had to fight someone’s Nadia Grell. O.o

Can happen, sometimes if the previous player didn’t kill their companion or used Stealth or a Phase Walk to get out of combat then you may face them as well as your own companion

We had that bug once and I ended up fighting two companions at once. Of course as a healer I didn’t have enough time to kill both under the time limit so I kinda died 🙁

Hey, I know my guild has to be doing something wrong on this fight we are in full 72’s with top dps on this fight dealing roughly 2500 with the others at a 1900-2100 but we still seem to be taking too long to end phase 2 and when we do get past phase 2 is seems like the healers have a very hard time keeping the tanks alive is there any advice you can give us for this fight? thank you

Phase 3 is the manifestations phase, tanks shouldn’t take that much damage at all. DPS seems a bit low for kell dragon phase though so that might be taxing the healers a bit.

Should be able to