SWTOR operation boss guide for Olok the Shadow, the fifth boss in Scum Villainy, a new Level 55 operation located on planet of Darvannis. Both storymode and hardmode guides are available.

Olok the Shadow is a multi-stage and lengthy fight with a puzzle element inserted into it. The fight itself is divided into three phases, with phase 1 being fairly boring and easy (planning stage) but the difficulty ramps up significantly in phase 2 and 3. Entire fight with all 3 phases lasts for 15-16 minutes.

For this fight, it is very important that your raid take the time out to plan things ahead. You will be presented with a huge 4×4 square below you. Each square is occupied by a droid. There are 4 types of droids: Recon, Frontline, Assault, and Artillery. Both Recon and Frontliner droids have 168k HP while Assault and Artillery have 250k. The number and type of each droid and their placement is entirely random and resets every fight.

Now, the way this fight works in phase 2 is that you have exactly 1 minute to get past each row of droids. Normally, there would be 4 droids per row but in phase 1 you can get tokens to “remove” some of the droids to help you. You get exactly 8 tokens in phase 1 and there is a fixed cost to each droid

So here, you will need to strategize and figure out exactly which droids you want to take out every row to ensure you have the best success for every row. Here are some general tips that may help you

The picture above shows a configuration my raid group had at the time.

So as you can see we got a bit unlucky and had 0 recon droids this round.

Phase 1 is fairly simple and it is mostly a stage to prepare for phase 2. The Wealthy Buyer will come with two bodyguards and cannot be damaged until both bodyguards are killed. You will then be able to attack the Wealthy Buyer for a bit before he disappear and give a random raid member a token. On 8m, everyone in the raid group will receive a token as you cannot get the token twice in the same fight. You will know who receive the token as there will be a big red text on your screen to announce it. You will repeat this 8 times until all 8 tokens are used. 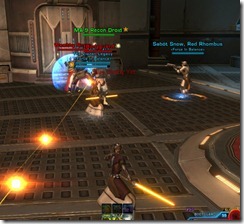 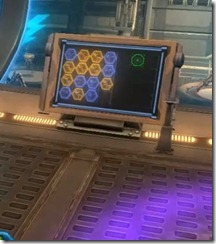 Once you have the token, you only have a limited amount of time to use it before the token disappears. Therefore, it is really important that you decide before hand what droids to take out and mark them so raid members can easily see them.

You will be using the token on the board in the middle. There are two sections to the board. The left side is a 4×4 square that corresponds to the droids down below.

The right section with the green icons is a tally of how many tokens you have used.

The droids you purchase will come up to help you attack the Bodyguards and Wealthy Buyer. They don’t do much damage so there isn’t a need to strategize on which droids to buy first.

Once you have spent all 8 tokens, the room begin to fill with poison gas and the elevator door will open to allow you to get to the ground level with the droids for phase 2.

You done the homework for phase 2 in phase 1 so phase 2 is basically an execution of your team’s plan. You get exactly 1 minute for every row. Once 1 minute is up, the Force Shield to the next row opens up and the droids in the next row becomes active. There is a strict DPS check to kill droids on every row before the next one opens up to ensure that you don’t get overwhelmed.

Recon and Assault droids are mostly harmless but Frontline droids will jump around and hit on random raid members. They hit hard and fast. Artillery Droids drop this electric bubble on the ground but a tank can kite them on the side away from the raid.

You may not get a chance to finish up phase 2 before Olok appears to start phase 3. Ideally, you just have a droid on the fourth row up and the other tank can chase after Olok and keep him busy while the rest of the raid finish up what is left of phase 2.

One tank should stick to Olok at all times and all DPS should focus on Olok as much as possible as he spawns more adds the longer the fight takes.

Olok will disappear for a few seconds and then spawn two adds. One of them is Shady Customer which have only 56k HP. The other is a Underworld Arms Trader with 56k HP. Olok drops threat when he disappears so the tank should taunt him when he appears again. 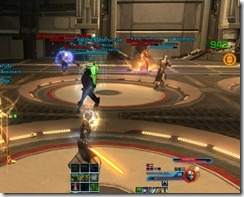 Underworld Arms Trader should be killed first as the Shady Customer doesn’t do a lot of damage. You can finish off the Shady Customer when Olok stealths. Both adds can be cc’ed. You don’t want to take too long to kill Olok as he will spawn more and more adds the longer the fight takes. Eventually, you won’t be able to keep up with the adds and have them wipe out your raid.

Underworld Arms Trader is quite nasty. He has the same two attacks you encounter earlier while fighting through the trash.

In the video, here is the configuration we received. 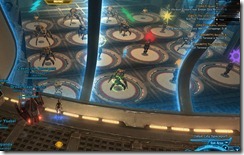 wow, this fight is really long

Oh ya, longest and toughest fight in the whole operation so far. Even the last boss doesn’t take this long and is much easier in comparison

do the first part of fight, the one on the “balcony” with tokens, reset if raid wipes?

We only attempted this once on HM before it got too late, and The Droid phase was no joke. This is going to be very challenging in HM it seems.

There are some German guilds that have already cleared HM apparently o.O

I think we are capable of doing it, we only gave it 1 attempt then called it a night. We got destroyed on the 2nd row, by what I believe to be an assault Droid. My best guess is this needs to be turned away from the raid. One of the smaller droids, I believe a frontliner? does a carbonize, making him even more difficult. The Artillery Droids, though high in HP’s, seemed to be the easiest to deal with once the tanks get down kiting the shields.

Looking forward to trying this again, prolly next weekend. The First 4 bosses are pretty easy once you get the mechanics down.

Assault and Frontliner Droids offer Package Deals. Assaults get a Plasma Cell, Frontliners get a Carbonize (and wristblade, but they may have that by default?). Any combination of two or more Assaults/Frontliners being active gives the Package Deal, which shows as a stacking debuff on the players.

For HM, this means you can have any number of Artillery/Recon Droids per row, but want to only have a single Assault OR Frontliner per row (or burn the Frontliner ASAP). You’ll also want to focus the Assault/Frontliner, so the next row opening doesn’t trigger a Package Deal.

Awesome, thanks this should help a lot. We most certainly had a package deal the way we got destroyed on the 2nd row.

Once tanks become familar with this fight Artilery droids are so much more friendly than Assault ones. Only way they can deal damage is by Ion Field, those can be dodged by moving away in time(it seems they cast it every 6 seconds, lasting around 20-30). Also, Frontline Droids seem to have some whacky threat mechanic, used to apprarently change targets at random called Retarget

Recon droids are not “harmless” anymore since you can’t interrupt. Spend a token on those. Found out the hard way when we left 2 of them at 4th row and they took out a dps and tank. Recon is the most harmful, in fact.

Oops that was back in beta when underworld arms trader had alot more health. Kill them first now as their HP got reduced significantly. I will correct it 🙂

This fight has changed since PTS. You are now allowed to buy single priced units (recon/frontline). And the colors are blue for single coin, orange for double coin (still changes to red when using). This change has allowed for more flexible mob composition, especially for HM with the inability to have both a frontline and assault in any given row. Also, the recon droids can’t be interrupted and like to turn and hit non-tanks for half of their health (Hardmode 8man).

The info here is updated for live version except the panel colors. You were always able to buy singe priced units.

So, we are finally attempting this fight as a guild, and phase one is no joke. Has something changed on this that hasn’t been posted to the site? From what we can tell each round of new body guards gets a little tougher and gets some new abilities.

Storymode or hardmode? Done both on live and didn’t notice much for phase 1. On hardmode one of them have an AoE I think but didn’t see anything diffcult.

That is HM and we were doing 16 man. Dunno if that effects anything.

Oh, and I wouldn’t say it was hard per say, we were just not expecting it and was very melee heavy, so I think healers just weren’t really ready for the damage and we just dropped.

Ok, second attempt I think we sorted it out, at 6 stacks (round six) the body guards do a flame sweep aoe. We chose to just keep melee out of this round to avoid any serious damage cause it really hurts.

At 7 stacks, they drop reticles on the ground, there is no more flame sweep. So just avoid the reticles and this should be easy enough.

At 8 stacks, they keep the reticles AND in addition will randomly drop aggro and switch targets.

I would also like to mention that the shady customers and the arms dealers come faster and faster toward the end of phase 3 on hardmode. While we oneshotted this phase on the fly, I thought I would mention that both of them can be CC’d. What I recommend is at some point like 40% you just CC the spawns and burn full time on the boss. You should likely have enough CC in your group to get two spawns, and you can just eat the DPS for the rest.

We did not do this, and lost quite a few people because of it. We ended up just eating the damage of like 3 sets of adds and burned the boss because of enrage timer.

I don’t know if this is a 16 man issue only or not, but thought I would mention we were doing 16 man HM. As long as you get the boss down, it counts as a win, you can run back and finish off the adds.

I noticed that Stealth Scan for BH can detect the Boss and the shady customers and bring them back to the fight before they planed. For the boss gives you like 1 sec to act and do something but at least you can avoid the attacks from the shady cust.