A preview of the planet Makeb, Macrobinocular and Seeker Droid quests that are part of SWTOR Rise of the Hutt Cartel Digital Expansion.

Makeb, the newly introduced planet for Rise of the Hutt Cartel, is a large planet that is 3-4 times the size of traditional planets like Corellia. Makeb’s unique geography means that regions are all segregated into small islands, which makes questing and traveling a breeze. 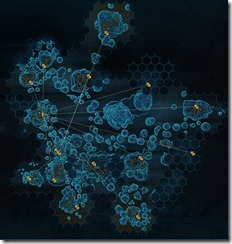 Makeb has an unique environment not seen in other planets. On the surface, it looks like a peaceful tropical paradise. However, this paradise is scarred with huge industrial complexes drilling away at the planet’s resources.

Makeb has something that everyone wants – Isotope 5. Without giving away the story too much, Isotope 5 can be utilized as a powerful weapon that can change the outcome of conflicts. The Hutts know this and have invaded Makeb to mine the resources for their own use. The Hutt’s invasion was not unnoticed – both the Empire and the Republic have sent in their own troops.

The two factions have their own separate storylines that are different but interconnected with each other. It is advised to play both faction’s storyline to gain a better understanding of the conflict on Makeb. There are no separate class specific storylines here but the story it is epic enough to make up for it. It is an action packed ride that once again make you feel like the hero of the galaxy. 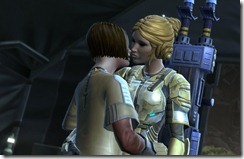 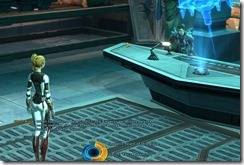 The main storyline cutscene is about 1 hr and 20 minutes long. Here are all the cutscenes for Makeb storyline if you like to watch (obvious spoilers). Note that only Empire version of the story is available right now but Republic version will be available soon when they get uploaded.

Level is a breeze in Makeb. You go from island to island with each island containing a portion of the main story mission and a [Daily] mission that you can pick up. This differs from the traditional quest hub approach where you pick up a bunch of missions and forget what they are even about. There is a sense of accomplishment as you finish one island and move on to the next. Those looking for group play can also find 3 heroics that are available as part of your leveling experience.

The main storyline alone won’t carry you to 55. Most players will be L53-54 after finishing the main story. This can be a bit problematic as you will at times fighting mobs that are 2-3 levels above you. Usage of experience boosts is strongly recommended. Players can expect to spend anywhere from 7-9 hrs to finish the Makeb content. Makeb’s content is only the tip of the iceberg as there tons of other content such as dailies, weeklies, macrobinocular and seeker droid missions to keep you occupied for days.

Makeb mob density is quite heavy so those using an AoE heavy spec may find themselves churn through the content faster than others. On my full Dread Guard geared healer (Sorcerer), I had no issues with any of the missions and chewed through mobs like butter. My other Rakata/Campaign geared healer didn’t have much of an issue either but I did find things get a bit more difficult towards the end.

There are two datacrons on Makeb, one relatively easy to get (+10 presence) and another (+10 endurance) as elaborate and lengthy as the datacron on the fleet. Be prepared to spend at least 1-2 hrs getting that endurance one if you are not good at jumping and have a natural fear of heights.

Macrobinocular, as you may have guessed, is a binocular you can use to identity objects and used by a new series of missions to scan certain objectives. The usage of it is fairly straightforward as most times you are told what to scan and the objects you need to scan lit up when you hover above it. However, they can bring another dimension to the game by revealing certain hidden objects you need to interact as part of a puzzle for example. 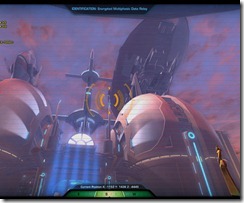 Macrobinocular has its own chain of missions that tasks you to travel to various planets and scan certain objects marked on your map. This may sound a bit boring but the game fresh it up by offering puzzle missions in between. You need to use your brain powers to figure out how to get past laser grids or open locked doors by using your macrobinoculars to find interactable objects that you may not have spotted otherwise. 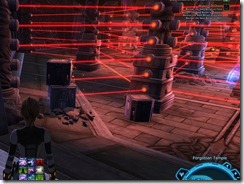 If puzzles isn’t your thing, you might be interested in jumping over gaps or crates to reach places that might not be reachable otherwise. There is one solo instance created with jumping in mind. 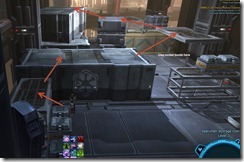 If solo jumping and puzzles are not enough, you will be happy to know that are two Heroic 4s at the end of the mission chain. One of them involves long car chase through the sky of Nar Shadda where you must jump over moving speeders to chase down your enemy. The other involves is a series of group oriented puzzles with an interesting boss.

Seeker droid is a little droid you can use to dig up items required by another series of missions. This series goes hand in hand with the Macrobinocular as they ask you to travel through the same planets.

The droid is simple to use. You deploy it on the ground and it will scan a circle of about 5m in radius. If it turn up something, it will lit up green and dig the object out. . If not, it will lit up red. After that, it places a little circle under your feet to tell you if you are near a buried object (post-dig sonar pulse). If there is no object under your feet, a red circle is displayed. If there is something nearby, a green half circle appears alerting you to the direction of the buried object. 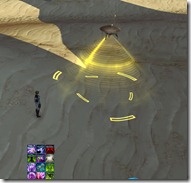 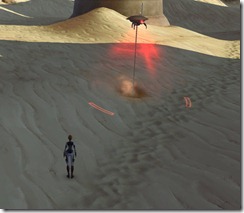 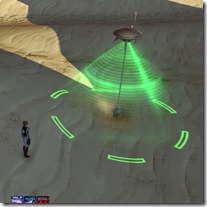 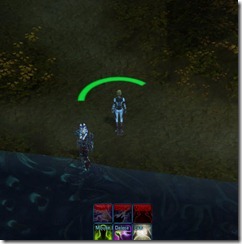 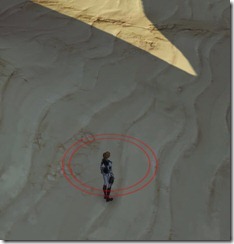 There are little consumables you get from doing the seeker droid missions or purchased from the vendors called GSI Triangulation Enhancers.. These buffs last 10 minutes and are suppose to increase the range and accuracy of the little circle under your feet. I personally did not see much of an effect, however.

If you still have nightmares about doing the hunt for HK components, you can rest easy as the objects required by the missions are no where as hard to find. The area you need to scan is marked out for you and there seem to be a number of them buried under ground. For most missions I was able to locate the mission item within 5-10 minutes of scanning.

Certain locations on various planets contain buried objects that are not part of any quest but may yield rare components needed for certain speeders sold by GSI reputation vendors. You can see some pictures of the speeders offered here. This give an incentive for players to go out and dig up things for the chance to get one of those components. These rare component containing fields can be spotted by your macrobinocular, offering an excellent interaction between the two items.

There is also a Heroic 4 at the end of the seeker droid mission chain. This heroic 4 doesn’t have any puzzles or jumps but does contain some interesting boss mechanics. You also get to make a dark or light side choice at the end that offer you a different chestpiece based on your decision (left = darkside, right = ligthside).

GSI dailies can be picked up as soon as you start the Macrobinocular/Seeker Droid quest lines. They combine the usage of seeker droid and macrobinoculars and create daily hubs in previously under populated planets. There are GSI daily terminals located on planets such as Alderaan, Hoth, Makeb, and Tatooine. Each planet has their own unique series of solo dailies and [Heroic 2]s.

There are two new reputation vendors introduced with Makeb. One is the Makeb Imperial Forces/Citizens of Makeb and the other is the Galactic Solutions Industries (GSI)

GSI reputation is earned by doing the GSI daily and weekly. The items sold by the vendor is already covered on this page so I won’t go too much into it here. 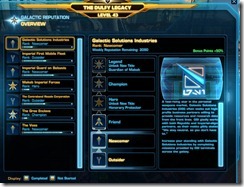 This reputation is earn primarily by doing the dailies and weekly on Makeb.The vendor offer two sets of armor (bind on legacy) for credits and L53 purple weapons for basic commendations.The two sets of armor are different on the Republic and Empire side (even called differently) and their appearance don’t change when you mail them over. If you have characters on both factions, you are essentially getting four sets of vanity armor to boot. 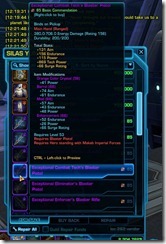 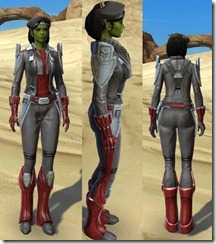 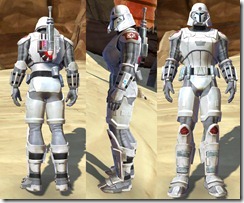 I will be providing guides for Makeb, Macrobinocular, and Seeker Droid missions. Some of it already written but they are not too useful at the moment as you don’t have access to the content to use them anyways. Nonetheless, you can see them here if you wish to know what to expect.