A guide to the SWTOR Level 55 endgame gearing process with a detailed look at every commendation system and all the dallies and weeklies. Updated for patch 2.4.

Abbreviations used in this guide.

This section attempts to answer this question in a very basic format. For more info regarding the various gear tiers, you have to consult the sections below.

Ideally, if you leveled up from Makeb, you should at Hero reputation standing or close. This allow you to grab the Artifact level mainhand for 80 basic commendations from Makeb Reputation vendor. For Artifact level armor, you can do the Oricon storyline which should provide you with a full 5 piece set when you complete it. For the remaining pieces (offhand/implants/ear/bracers/belt) you can either buy them on the GTN from crafters (search for Artifact on the GTN) or save up your Basic Commendations to buy them at the Black Market level

Do hardmode L55 flashpoints, dallies, etc to get your Basic Commendations so you can purchase Black Market gear from the Basic vendor for commendations. If you need set bonus, plan on pugging some storymode operations to get the Arkanian gear.

You can either save up 350 Elite Commendations for a mainhand from CZ-198 reputation vendor or save up some credits to buy a 31 barrel/hilt from a crafter. That is the best barrel/hilt you can get without doing any operations.

Getting this tier of gear can be donable with just pugging but you have to get lucky with a good PuG as the Underworld/Verpine stuff only drops off Tier 1 hardmode Operations (TFB/S&V/Golden Fury) or from the last two bosses of the Tier 2 storymode operations (DF/DP). From this point on, you will need to really get into a guild to get better drops.

New 50s will no longer receive a free set of Tionese gear or any sort of free gear handout. Instead, they must gear themselves with a combination of planetary commendations and classic commendations.

If you need a bit more gear,  you can do some dallies in Ilum, Belsavis, Black Hole, Section X for classic commendations. Those looking for grouping action can also queue up for L50 hardmode flashpoints or L50 operations to get Black Hole and Hazmat gear (rating 61 and 63 respectively). 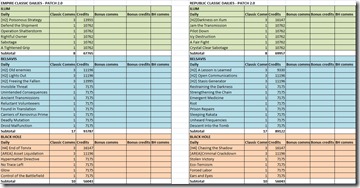 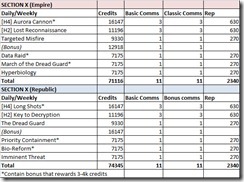 New in Patch 2.4, players who complete the Oricon storyline (level 55) can expect getting a full set of the Artifact quality armor, which are rating 156 with 66 mods.

Artifact quality Bracers/Belts/Offhand/Implants/Ear can also be crafted by crafters who can purchase the relevant recipes at the Basic Commendation Schematic vendor on the fleet (Crew Skills section). These recipes requires Hero standing with the Makeb faction and costs 60 Basic Commendations each except for the Belt/Bracers which costs 15 Basic Commendations each. The resulting product is BoE and can be find on the GTN (search for Artifact).

Black Market and Arkanian are L55 gear and they are rating 162 with 69 mods (Q30). The difference between them is like the difference between Black Hole and Campaign in previous tiers. Black Market gear have no set bonus and can be obtained from hardmode L55 flashpoints or purchased with Basic Commendations while Arkanian gear have set bonus and is obtained exclusively from storymode L55 operations (ear/implant can also drop from last boss of Hardmode Czerka Core Meltdown Flashpoint). In addition to the set bonus, they have slightly different stat allocations.

L55 HM flashpoints can be easily completed by players in Dread Guard/Hazmat gear. Players in Black Hole/Campaign gear or less may consider getting a few pieces of the Basic Commendation gear if they want to play it safe.

The four L55 hardmode flashpoints have two bosses inside them that drops Black Market items. The bonus boss (usually require you to kill 80-85 mobs in the flashpoint to unlock) drops a random Black Market item while the final boss drops a fixed set of items. The exception is the Czerka Core Meltdown Flashpoint which doesn’t have a bonus boss but drops Arkanian Ear or Implant.

Since these Black Market pieces contain no set bonus, it is advised to rip out the mods and enhancement.

Basic Commendations can be used to purchase Black Market gear the the Basic Vendors on the fleet, Makeb Orbital Station or Gravity Hook Seven/Avesta Plantation, and various level 55 daily areas (CZ-198, Oricon)  starting at Level 55. The gear you purchase with Basic Commendations do not come with any set bonuses. They are rating 162 with 69 mods.

Keep in mind that the set bonus on your Arkanian gear does not stack with your old set bonus from L50 gear. 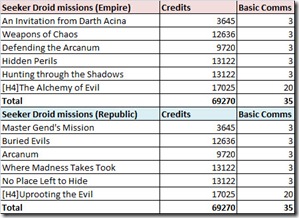 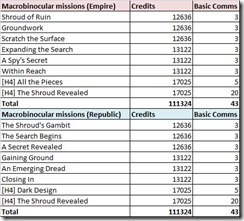 *Except Sunday where you get 6. 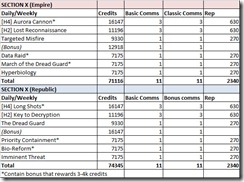 *You have a choice for Makeb Stage weekly missions and heroic ones tend to reward more Basic Commendations. You get a minimum of 6 or a maximum of 19 for doing 6 missions required for the staged weekly. 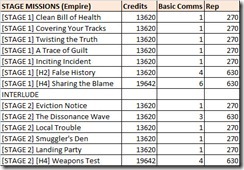 Verpine and Underworld gear are 168 rating with 72 mods (Q31). Much like the difference between Black Market and Arkanian gear, Verpine gear does not come with set bonuses and can be purchased with Elite Commendations or as random drops from Tier 1 hardmode operations while Underworld gear comes exclusively from Tier 1 hardmode L55 operations (TFB & SV)

These items can be found on the Elite Vendor in the supplies section of the fleet. Mainhand can be purchased from the CZ-198 reputation vendor.

*The mainhand you purchase here is only rating 162 (Arkanian) level and requires Champion reputation with CZ-198.

Tier 1 Level 55 Hardmode operations (TFB, S&V, Golden Fury)  can be attempted by players in full Dread Guard but you may need a few Black Market/Arkanian upgrades to succeed against the enrage timer. Terror from Beyond hardmode is much easier than Scum and Villainy and players are encouraged to do TFB HM first to gear up a bit before attempting S&V. Golden Fury in Toborro’s Courtyard on the other hand is slightly more difficult than most hardmode operation bosses due to tight enrage and low tolerance for mistakes.

Note that Golden Fury is a bit of a wildcard and might be able to drop any of the Underworld pieces.

Patch 2.2 introduced Nightmare modes for both Terror from Beyond and Scum and Villainy. In addition to Elite and Ultimate Commendations, these operations drop Kell Dragon token gear and Shadowed gear (Kell Dragon stats without set bonus). These gear are 174 rating with 75 mods (Q33) and cannot be purchased with any commendations or crafted.

Tier 2 Hardmode operations requires at least Underworld/Verpine gear to start off. Kell Dragon/Shadowd gear will make things a bit easier. Note that the first boss of each operation and Grob’thok drops one of two possible loot tokens.

With so many dallies and weeklies all all offering half a dozen different  commendations it can be a nightmare to keep track of them all.