A guide for GW2 Guild Challenge, part of Guild Missions introduced with the February update.

To be able to research Guild Challenge, you have have Guild Bounty, Trek, and Rush unlocked previously. You will also need 50k influence and 150 merits to start researching. 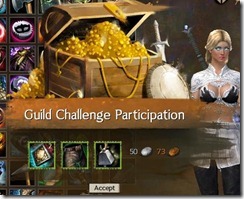 Description: Brand energies coursing through crystal nodes along Blightwater Basin in Blazeridge Steppes are reaching critical levels. Work together to destroy these crystal nodes and stop the energy buildup. 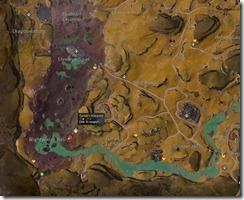 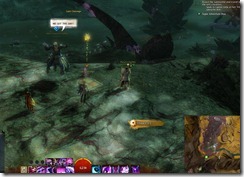 [Group Event] Use charrzookas to destroy the crystal nodes simultaneously.

You will need to kill all five crystals within 30 seconds of each other in the timespan of 20 minutes to complete this guild challenge. These crystals can only be damaged by the Charrzookas that are dropped off the charrcopter at the beginning of the challenge. You will need to have players assigned with Charrzookas at each crystal and other players to protect them as they will be harassed by army of branded creatures.

Beware especially of the Veteran Branded Sparks and kill them ASAP as they can cause a lot of damage. One alternative strategy some guilds use is to have everyone attack the same crystal and then stop when they get to very low before moving on to the next crystal in a clockwise/counter-clockwise fashion. Once all the crystals are brought to low HP, then everyone basically kill them quick in a circular fashion. This require all your members to pay attention and not kill them when they are not supposed to. 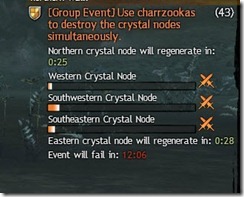 Branded For Termination – Fields of Ruin

Description: Find and bring down a Branded ogre chieftain and his pet siege devourers in Varim’s Run in the Fields of Ruin. 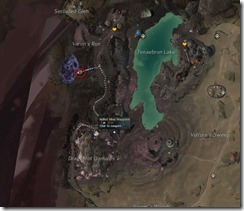 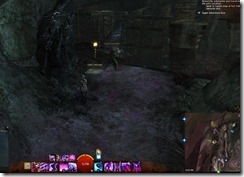 The idea to kill all 3 targets within 30 seconds of each other. Once one of the targets is killed, you have 30 seconds to kill the other two before the first one revives (back to 50% HP). You have 15 minutes to complete this before the event fails. 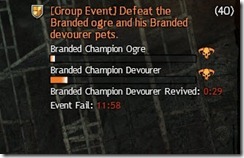 The main thing you have to watch for with the Branded Ogre is when he jumps in the air and throw down a conal shockwave punch. It hurt quite a bit (can one shot some players) and put 9 stacks of Bleed on whoever get hit by it. The Ogre does have more HP compared to the devourers so put more players on him if you need to.

For the Devourers, they have a siege attack that you need to dodge. You won’t get one shotted by this attack but it will put a Burning debuff on you. 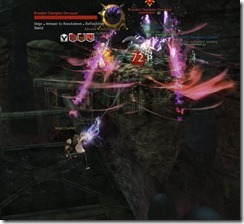 Description: Krait have taken quaggans captive for ritual sacrifice in the Mire Sea in the Mount Maelstrom region. Rescue the captive quaggans before the krait execute them. 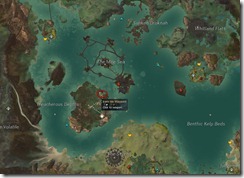 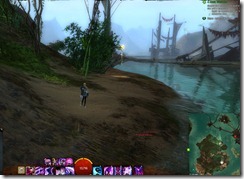 [Group Event] Rescue the captives before they are executed by the krait.

There are 10 quaggans that you will need to cut down within the time limit and escort them to safety. Each quaggan have their own safety spot that you need to escort them to. Escorted quaggans will be attacked on the way so make sure you have a few players protecting them. You will want to have at least one full group escorting each quaggan.  Having one quaggan die will fail the event.

Quaggans that are still bound cannot be attacked so you don’t have to worry about them. You can split your guild into multi-groups and do this in waves, with finished groups coming back to escort another quaggan. Each quaggan takes about 2-3 minutes to reach their destination.

Note that the 10 minutes time limit is how much time you have to unbound all the quaggans. Once all the quaggans are unbound, the timer ends and you can take as long as you need to escort them to safety. 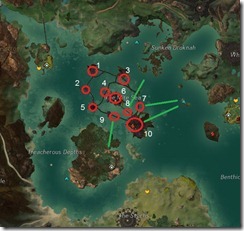 Save Our Supplies– Iron Marches 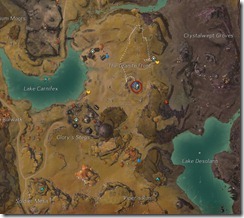 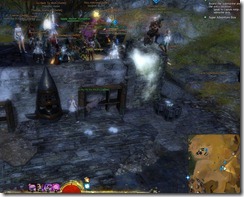 This guild challenge can be a bit difficult for smaller guilds. You will need to protect 20 barrels from the Flame Legion for 11 minutes and 40 seconds. As long you have one barrel remaining at the end, you will complete this guild mission successfully.

You can build turrets, mortars, and mines to protect the fort against the Flame Legion onslaught. Keep in mind that only one upgrade can be build at a time so plan your upgrades accordingly. I personally did not find much use for the Mortars and Mines but the turrets were really useful.

Turrets: The first thing you will notice once you start the challenge is the turrets that you can build. There are about 5-6 of them. You first must activate them and then you can build upgrades such as increased ammo capacity, caltrop shots, and naplam shots. Turrets are really good and can damage large groups from a distance. 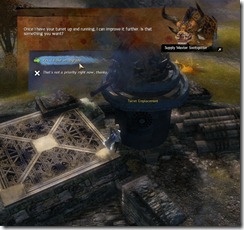 Mortars and Mines: Right by the Supply Master are two shelves. One containing Mortar Shells and the other containing Unarmed Land Mines. You can bring the Mortar Shells to mortars around the fort to activate them. Land Mines can be placed in chokepoints to stop advancing Flame Legion attackers. If you run out of Mortar and Land Mines, you can ask the Supply Master to build more of them. 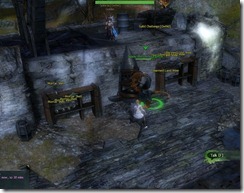 Flame Legion attackers mostly come from the south and north side of the fort. North side is a narrow passage that serve as a chokepoint that can be maintained by a small group. South side is a bit more wide open and will require a larger group to defend. 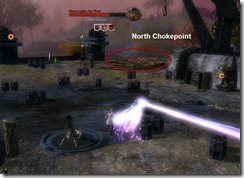 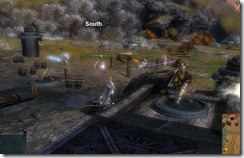 Flame Legion mobs have stealthers and archers that attack from a distance so make sure you have players guard the barrels against stealthers and players running out to kill the ranged mobs.

Description: An experimental device has enraged various creatures around Fionnghuala Scratch in Timberline Falls, Defend the skritt sentries stationed outside the scratch until the researchers can shut down the device. 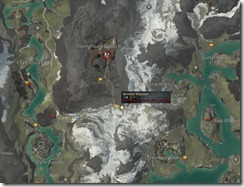 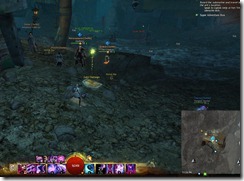 The two sentries at the north are connected via tunnel so a single group with some backup can probably hold on two both sentries. Becareful to not venture too far into the tunnel as mobs can spawn behind you and head to the skritt sentries right away.

The south sentry have a lot of ettins while the north ones are mostly spiders and jotuns, something to keep in mind if you are going after slayer achievements.

Description: A crab-hunting quaggan needs your help to keep her catch alive on Southsun Cove while the karka close in. 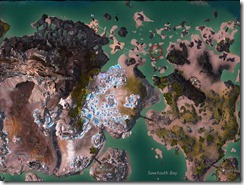 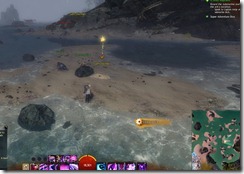 For this guild challenge, you need to ensure that the crab does not leave the red circle or fall on the ground. One person will pick up the crab, and this marks them with a shield icon and a beam of light on top. This crab carrier have no endurance regeneration and lose all their skills. They can, however, toss the crab to someone else (the throw is a ground target so make sure whoever is receiving it does not move) The event fails if the crab carrier is downed, drops it on the ground, or leave the red circle. 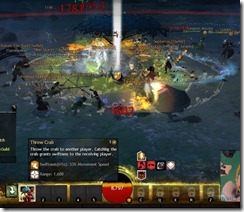 Karkas will spawn to attack the carrier with a veteran and champion karka spawning later on. Everyone will need to defend the carrier until the timer ends.

Awesome guide. Thanks a lot Dulfy!

Southsun Crab Toss is pretty easy if you have enough people and give the carrier a group of support characters. On our first attempt, two Champion Karka spawned right before the end of the event, and our carrier was downed with one second left on the clock because he got knocked down by the Champ’s jump and couldn’t toss the crab. We prepped with stability on our second try, (happened to get this same one twice in a row) but the champs didn’t spawn that time. We think a bunch of Young Veteran Karka spawned instead. Just something to watch out for!

so 10 minutes time limit is to break them free within 10 minutes?

Yes, as the timer also disappears when you free the last one. Escorting does not need to finish in the time limit.

It won’t, we had a fail on a commendation farm run and none got the reward, you have to complete it with success.

Dulfy if you can contact me I can help with the Quaggan challenge at Mount Maelstorm a bit, I can give a hint and some of the locations of the quaggan and an approximate of the others.

You should put a warning in Southsun Crab Toss against transform skills that occur in traits. The one we got struck with was Engineer “Drink Elixir S at 25% Health”, which is a transform that made the crab drop, and we failed the challenge.

The Deep Trouble map is soooo wrong now. Here is the correct one. http://i.imgur.com/TIj4wM2.jpg

[…] of time. Rewards participants with 2 Guild Commendation, and the guild receives 30 Merits! Use DULFY’S GUILD CHALLENGE GUIDE for […]

The Deep Trouble map is soooo wrong now. Here is the correct one.

The Deep Trouble map is soooo wrong now. Here is the correct one.

(Sorry for the duplicate posts. I’m trying to sort and separate my Disqus accounts so if you can delete the last two, that would be awesome. )