SWTOR Loremaster of Makeb achievement guide with detailed instructions on getting the codex entries required for this achievement. The achievement can be found under Location-> Makeb –> Exploration and reward 10 achievement points upon completion. 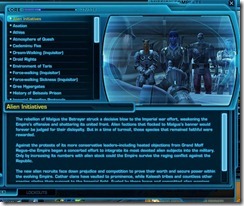 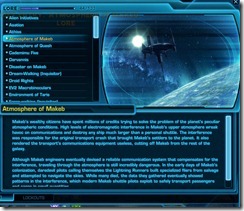 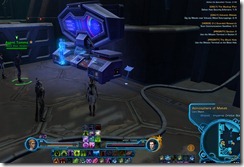 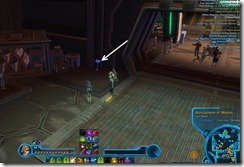 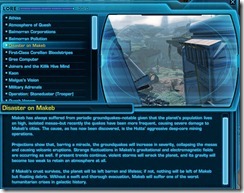 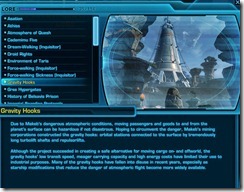 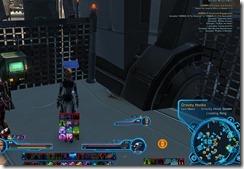 History of Makeb (Empire only) 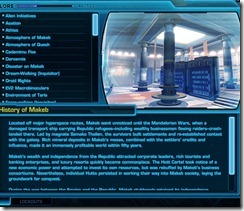 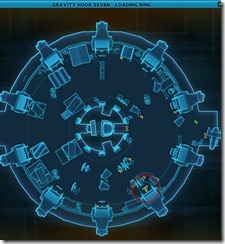 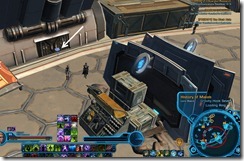 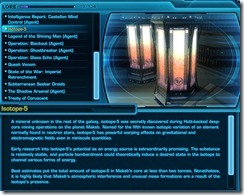 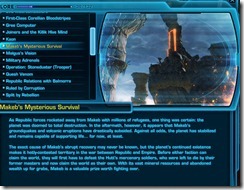 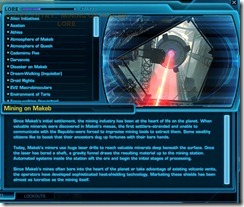 Empire players can find this in the bunker right behind the speeder in Cartel Mining Mesa. 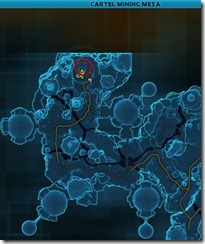 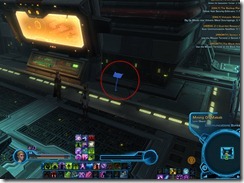 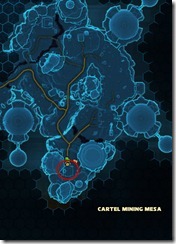 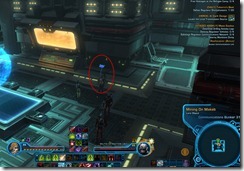 Granted to Empire players who have completed the story mission: The Monstrous Mesa of Solida Hesk. This codex was previously unobtainable but fixed in patch 2.1.1

State of the War: Imperial Retrenchment (Republic only) 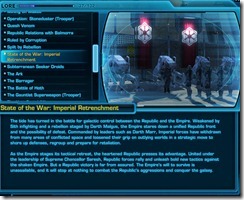 Obtained upon your arrival to the Makeb Orbital station for the Republic quest Trouble in Paradise.

The Ark (Republic only) 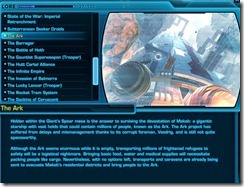 Obtained when you complete the Republic quest The Ark.

The Hutt Cartel Alliance (Republic only) 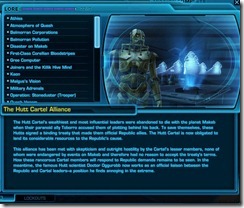 The Hutt Conquest of Makeb (Shared) 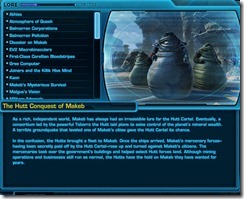 Datapad found near the Republic speeder in Talaos City. Empire players can access it if they can withstand a few attacks from nearby Republic guards. 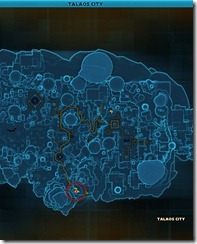 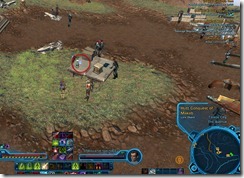 So at the moment it cannot be done.

Great guides as usual but with all the bugs in the achievement system I have to ask if it’s worth doing atm or at all. Especially as most of the codex bugs were reported over a year ago and nothing was fixed. Not only that but there is no official comment on whether or not they even intend to fix the 20+ achievement bugs that have already been noticed. So why bother?

I think with the turn over of devs a lot of the old “bug” information was lost, I know on the forums there was a lot of post about bugged codex on Tython and Taris and both those were removed and the planets can now be 100% completed. If we just keep reporting the bugs to the devs I’m sure we will eventually see these codex and achievement bugs start to disappear.

Dulfy are you currently working on a “well connected” achievement guide? I’ve been able to unlock some of these, but I’m almost positive they were all on accident.

State of the War: Imperial Retrenchment – This achievement I already have in my Codex/Achievement list but I play only for Empire. I doubt it’s the “Republic Only” achievement.

I’m playing for the Imp side, and I’ve got “The Hutt Conquest of Makeb” codex entry without using the datapad in the republic camp. Unfortunately, I can’t remember how actually I’ve got it. I’ll let you know If I come across it again while leveling a toon up to 55.

I scoured every part of Makeb but I couldn’t find Operational Briefing: Makeb Strike Team. I thought I’d missed it somewhere, but apparently this achievement is bugged as well 🙁
This makes me a sad panda.

Excellent guide, thanks for all the work! Just an update on Alien Initiatives – I did not receive it after completing To Pierce the Heavens — I kept on playing and I received when I picked up “The Lurker” mission from Captain Hanthor.

I can confirm this as well. Thank you Nissana, that was quite a relief to learn I could still get this one.

The Hutt Conquest of Makeb (Shared) – Emperial –> Solida Hesk’s Estate Shuttle
When you get there, on crates between Mission Terminal and Medical Droid, there is a datapad with codex entry. No need to go die as Imp in Rep area and it is much closer and easier to pick. 😉

I strated the Weekly Mass Exodus mission and did not receive the Lore entry.

Is there another way to achieve this nowadays?

Appreciate your guides. I use them all the time.

After doing more research you can not gain the Makeb’s Mysterious Survival lore entry due to the 4.0 changes taking out the conversation you have to get the mission Mass Exodus.

The terminal where you gain the mission does not give the achievement. Somehow it was tied into the NPC conversation.

Same with other heroics all over the game that used to grant achievements when speaking to NPCs. They should grant the achievements upon quest completion or remove them from the requirements for Galactic Loremaster.

Now you have to complete the weekly on the republic side. It’s a pain in the ass, but it’s sure better than unobtainable.

I have found though even though the original mission quest used to finish Loremaster of Makeb is gone, I can verify that completing the current Makeb weekly on the Republic side will award you the “Makeb’s Mysterious Survival (Republic only)” Codex needed to complete Loremaster of Makeb. I recently just completed it. Completed Loremaster of Makeb on 2-16-2018