A guide to defeating Canach and Subdirector Null included with the GW2 Last Stand at Southsun patch. 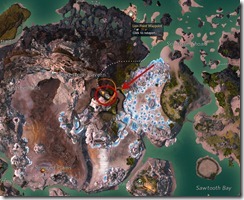 You can also get the Lair Light-foot achievement from either instance but it is a lot easier in storymode.

Canach’s Lair is a soloable instance with just Canach at the end. Make sure you pick up the Mine Detector at the entrance of the instance and get familiar with its controls

1) Scan for mines – this reveals each mine’s area

Canach cannot be damaged via any normal means (except via conditions). Instead, you must knock him or run him through one of the disarmed mines. You must first scan the area to determine the type of mines near you and then use the corresponding skill to disarm it. Once a mine is disarmed, it turns green and can be used to damage Canach instead.

Land Mines damage Canach the most so make sure to disarm them (#2) and drag him over it or knock him into it  as much as possible. Caltrop mine will slow Canach down. 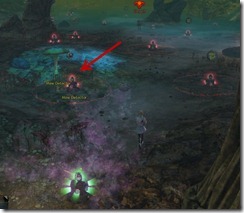 Watch your chat window for the message Canach is preparing to detonate all of his mines. Get to safety! When this happens, all the armed mines will explode and will respawn a few seconds after. Right after they have respawned, they are yellow and cannot be disarmed. Once they turn red, you can disarm them again. 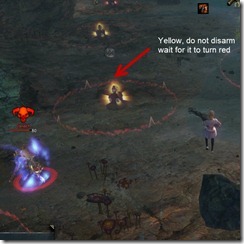 This is the best place to get the Lair Light-foot achievement as long you don’t get knocked into any of the mines by Canach. 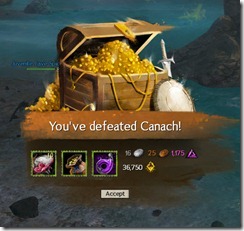 Note that this reward is now account bound and is a one time reward.

You will encounter this boss on explorable mode (5man). This fight is a bit challenging and requires coordination from all party members to ensure a successful kill.

It is a good idea to have all party members clustered near a corner of the cave with mines nearby. Having your party members running wildly in the entire cave increased collateral damage and lessen the chance of getting Subdirector Null into the disarmed mines.. This is especially important near the end of the fight where Subdirector NULL has a soft enrage mechanic.

There is a good spot near the entrance of the cave (to your right)  where there is a single poison gas mine that you group can gather around and just run Subdirector NULL over when he gains damage immunity buff. 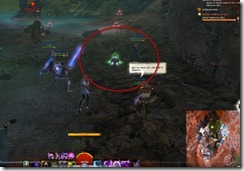 While fighting Subdirector NULL, you will receive a message about his shield (Subdirector NULL has increased shielding to shrug off damage. Try using a land mine.). When you get this message, Subdirector NULL will become immune to damage and you must disarm the ANY mine and run him over it to remove his immunity buff. You can only scan and disarm mines with the Mine Detector which you can pick up inside the instance. 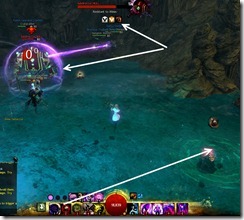 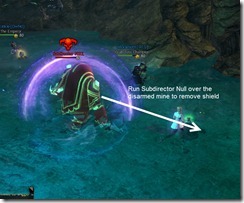 Note that this mechanic might not be working as intended as any disarmed mine will work in removing the buff.

To disarm a mine, first use your #1 skill to scan a mine and then use the corresponding skill (#2 for landmine, #3 for poison mine, and #4 for caltrops mine) to disarm it. This will disarm the mine and turn it from red to green.

Here are the icons for each type of mine (Landmine, Poison Gas, Caltrops from left to right) 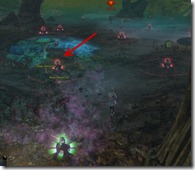 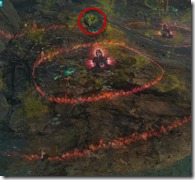 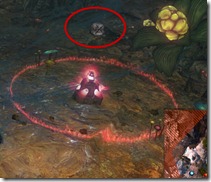 Subdirector NULL is working to rearm all of its mines.

This is where Subdirector NULL recharge all the mines you disarmed so you can disarm them again if necessary to remove his shield.

Subdirector NULL is preparing to detonate all of its mines to trigger a cave-in. Get to safety!

Move away from the red circles surrounding the mines and you will avoid the damage.

Subdirector NULL is summoning orbs of rampant energy. Avoid them.

These orbs will have an AoE circle that dish out periodic damage to anyone standing inside them. They are fairly easy to avoid so you shouldn’t have to worry about them too much. 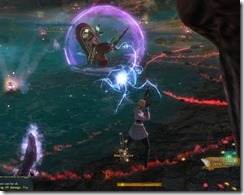 These turrets have very low HP but they will heal NULL is they are not killed quickly. 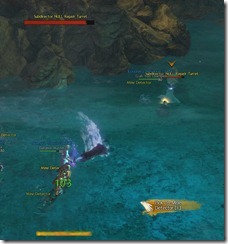 Subdirector NULL is beginning to electrolyze you. Defeat it before it kills you.

This is a soft enrage mechanic that triggers at around ~20% HP. It will stack an increase amount of electrolyze stacks on party members that deals damage over time. The longer you take to kill Subdirector NULL, the more stacks you party members get and the more chance for everyone to die from Subdirector NULL. 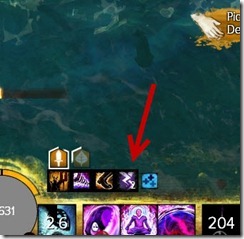 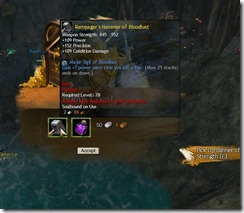 Any chance on getting a few sentences on the solo part? I went in, made it to the back, let him stand in front of me with my back to a wall wailing on me (though he didn’t really hurt me much over time) while he had his 1d and 1h invulernable buff on him. Deciding I didn’t want to kite him for over a day, I clicked the exit button.

Use the scanner to check the type of the mine, trigger them with #2, 3 or 4 skill.

After u trigger them, they will turn green. Lure Canach into them. Or use the bug i mentioned

another easy way to win the solo instance and get the achievement is to
go to main room and run around the pillar to the left. there are
generally 2 skill-2-type mines close to the pillar. you can just run
around the pillar while luring him into those 2 disarmed mines. just repeat that when they respawn. takes about 3minutes.

FYI to rangers out there: getting the light foot achievement is nearly impossible with a ranger since the pets seem to trigger the mines.

Indeed. Even when my pet was set to passive it found its way into mines, either triggering them on me or triggering mines I intended to use against Canach. Rangers need a perma-stow option.

I tried doing it with bird pets, but if I stopped moving, the bird landed and set it off. I understand why they wouldn’t want to make a perma-stow option, as the character would suddenly be a medium armored warrior. But maybe they should update the birds, or at least one of them) to stay flying all the time. Or give a breeze rider for a pet.

I killed him relatively easy, but is a bit a long fight. Since my ranger
is maxed on condition damage, and I use a lots of bleeding attacks, I kitted him
to the entrance of the cave: he followed me like a puppy. Then just made eat my arrows!
Note: I just placed myself against a wall, He do not attack constantly in there so I
was rarely harmed by him, just a knock back attack from time to time.

Get them to trigger a caltrop or a poison mine once (they have condition damage).

After that, you can kill them with your condition damage, no need for mine anymore.

It works very well for the Light Foot achivement

Thx for the guide. The challenge is good but the reward is disapointed

What was the reward for Canach and Null?
**nevermind… they’re included in the guide… derp**

how do i get the lair light foot and contractually oblidged achievements ?

Thank you Dulfy! You are insanely fast with your updates… You’re the greatest.

i got the lair light foot, you gotta kill canach in the single solo story to get it, it’s pretty simple

Seems to be per character on the solo instance, not sure if an oversight or not.

About the Lair Light Foot achievement, it doesn’t have to be against the Canach in singleplayer. I got it during the NULL explorable part. They were even nice enough to let me sit it out since they all already had it haha. :p
Very easy.

oops, thanks for catching it 😀

No problem. And thanks for all the guides you’ve been putting out so far with such efficiency!

You can interupt Canach with skill 5 on land mine detector when he stops to detonate all of the mines. Helps get it done quicker.

Patch came out a little bit ago that made the Canach bonus chest account bound instead of character bound. Didn’t take long for people to start making new characters running Canach for the chest then deleting said characters rinsing and repeating.

Thank goodness for that, I did wonder how many people would be doing just exactly that. Would have been a lot of gold and karma for very little effort at all . . .

It needed to be done, but I’m still very disappointed that altoholics like me have to suffer for the greed of others. I think ANet should have kept the reward character-bound, BUT the reward from Canach’s Lair is scaled according to your TRUE level. So, a level 2 who just ran to Southsun and does the dungeon would only earn 2 silver and a Sip of Karma, as compared to a true level 80 character.

You can hut Canach with Lifesteal.

what about the crazed karka and the contracts achievements?

Next week I think

Similarly done although I used Death Blossom, pretty much same deal though.
I do wonder if the condition dmg after he has been hit by a condition dmg trap is as intended though.

Can the story mode be repeated? Seems like a quick way to level up.

I want to know this too. can we repeat to lvl up toons?

I know of a shorter way for killing NULL in under 1 min with DPS group (discover by me last night after 3 hr try haha) anyway you stack up at the corner as soon as u get into boss room stay there and let boss run to you, dps the boss. When his shield up press (3) on the trap and then (5) to push boss into trap to disable his shield, and boss will run back to the corner again and GG.
http://i42.tinypic.com/331ioh4.jpg

The latest update apparently made it so that Canach is no longer vulnerable to conditions, so the mines are the only way to defeat him now.

[…] ArenaNet have posted a general guide to the Southsun story, and Dulfy has a guide on both the single and 5-man dungeon instances. This entry was posted in GW2 Events. Bookmark […]

I hope business is good, cause you earn it =D