This fight is tightly tuned for nightmare and is a step up in difficulty from The Withering Horror. Phase 3 especially put a lot of stress on healers.

Heirad’s attack cycle abit faster and as a result you have a shorter time between Lighting Fields. This means you will need a much higher DPS to ensure that you only get two Lighting Field in this phase. . Having three Lighting Fields may cause you trouble with the enrage.

Heirad’s Lighting Field attack will also slow player, making getting to your position much more difficult. 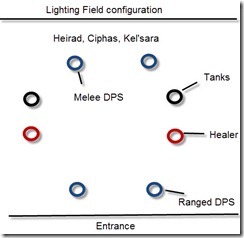 Also, it should be common knowledge but control your collateral damage to Ciphas and Kel’sara this phase as otherwise they will buff Heirad and increase his damage.

Lastly, the Surging Chain attack by Heirad will reflect any damage done to him so make sure you jump on Ciphas right away to break the shield.

The big change to this phase is that Ciphas’s Doom is now six stacks. This means that you want to try avoid accidently eating a green circle when you don’t have Doom on you as that can get the “doomed” person killed. The player with Doom will probably need to consume all the green circles and then wait for new circles to pop up to remove all six stacks.

When Ciphas dies, all Doom stacks are removed so you do not need to worry about dying to Doom afterwards.

Phase 3 is the most challenging part of this fight and is very healing intensive due to several new mechanics, 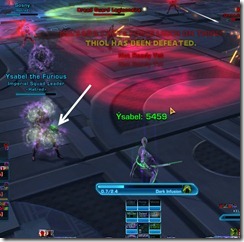 3. The three Dread Guard Legionnaires that Kel’sara summons all have ~50K HP each and hit a bit harder. They should be tanked if possible to avoid having them running rampant and killing the DPS/healers.

Anyone know if Force Barrier works against one shots like Doom or Color Deletion Protocol?

I know it works against Doom in Hardmode but it might not work in Nightmare.

For anyone else curious, our healer tried it. It won’t clear the Doom debuff, but if you’re in it when the debuff runs out, you’re safe.

did you try in HM or nightmare mode?

It works on Nightmare, just tried it.

On live your health figures are way off

And Heriads sheild reflects damage, and the lightning field does a stacking slow

Ya they buffed the HP on live.

Is it even possible to do it with their health at this amount? I highly doubt a kill before a second lightning field is possible for Heirad,

Our best attempt is 40% on Kel’sara with possible enrage at 15% if we didn’t die off. It sounds possible in theory but seems really overtuned atm.

Yeah,it seems that way on the reports on forums as well. I can only hope they don’t do what they did to LI HM to this.I love this challenge ! It’s going to be a close call even with a great group.Haven’t seen this challenge in SWTOR for too long.GL on downing in! ~Lirel,DWBI guild ,Beregen Colony

You shouldn’t release your guides from the “test server” because as our guild found out tonight, IT’S NOTHING LIKE THE PTS. Like the lightning phases on the Dread Guards, It’s impossible to do it on 1 attempt. 30% we were on our 3rd. Don’t release your guides until you have checked and done it on the live server as it throws a lot of people off…

Fights are subjected to change on live server, that is something you should expect. If the fight gets changed, the guide gets updated.

Those of us who did it on the PTS were thrown off too by the sudden increased in diffculty so you are not alone in that.

our Enrage was yeterday set at 6:40 min, anyone know how to deal with it? we got the third lightning field from hierad, but i must say we had 1 sentinel 1 vanguard 1 guardian and 1 commando ^^ and the enrage started at kelsara with 70% and 1 dd and 1 tank died in p3

The enrage here is not normal. It is due to them buffing the HP too much. To my knowledge no one has beat this encounter yet due to enrage.

yes i know, worlds best try was 28% enrage as far as i know. but no one from the “yellow” admins wrote anything about that problem. but nobody knows some extra mechanics in this encounter which wasnt on the pts?

@Evonella- you are so funny^^Its not The Bible,I think- It will give
people some hints,Most people (expect U?) who read this kind of guides
knows that something can be differend- and, maybe they will find an
other way to “Rome”

Dont release your comments until U think about , what “B.S.” U writeThank 4 the guide

I’ve been wondering of a different way of doing the Dread Guard fight in Nightmare TFB. I know everyone says Heirad HAS to go down first but that doesn’t seem to work very well. I say take down Kel’sara FIRST, guide says “Kel’sara – Dark Bond – As Kel’sara takes damage, Ciphas occasionally becomes more and more empowered with Blood Vengeance, significantly increasing the damage he deals.” the keywords there are “occasionally becomes” but if you wait till Ciphas hops over and casts Empowered Barrier on Heirad you won’t have to worry about him because no one will stop him until Kel’sara dies. If that worked it would be so easy, no Force Leach, no players dropping red circles (Expiatory Motes), no Lighting Field, no Force Leach. It should be worth a shot 😛 maybe try it out on a Normal or Hard mode to see what happens. Just because Dulfy says something has to be done doesn’t mean you shouldn’t try to find an easier or better way of doing things. I’ve read many strats here that are just backwards or retarded

I heard some EU guild downed it,they had their tanks attack heirad for the first phase and had them use aoe moves to maintain aggro on the two others.Smart thinking and insane dps.Hopefully this helps other guilds get through until patch,however this did take them more than 100 tries.Cheers Europeans,being more efficient than us Americans again QQ.

post-nerf questions: We have been working on this fight the past couple days and are getting through phase 1 pretty well right now, before the 3rd lightning field. (beating it only by a couple seconds ~15% when surging chain 3 happens). How are we doing for the enrage timer? If we lose to the enrage timer is it because of DPS lost in phase 2 and 3 then? This is my feeling but there isn’t a lot out there on the fight yet. We have 2 melee dps (jugg and mara), so the movement in the later phases might be a big issue for us…

Having two melee can hurt a bit with the extra movement etc as you said. It should still be killable though. Can you guys push any faster in p1? Maybe killing Heirad before the 3rd surging chain? That would save you a ton of time to cover mistakes in p2/p3

Sentinels/marauders can also use their guarded by the force to not get killed by doom.

One of my guild mates recently discovered that Mercs/Commando chaff flare/diversion can absorb Doom if used at the right time and if you have the two talent points in “decoy” (arsenal/gunnery tree).

Damage reductions seems to be quite slight – but noticable. Just on the forgiving side on red puddles, for instance – quick grabbing of green puddles and they’re now survivable.

And yet this says different

My bad, accidently added 10k to Heirad and Kel’sara :p

I have a question about healing mechanics in phase 3. As a commando healer, can I put my Trauma Probe on the tank or will it instantly kill him if the other tank is late with their taunt? As it seems commando healing is really challenging here as I cannot use my Hammer Shot either since it cannot be interrupted by jumping or moving. Any tips from other commando healers?

Been trying this one lately. First two are easy, but red puddles just destroy us. Looked from your video like there weren’t very many puddles and puddles didn’t appear under tanks, allowing them to hold still and letting melee maximize DPS. Also noticed the healer who was making the video stood where the adds appear and not one red puddle appeared under her. Is there a way to encourage puddles to appear in a certain way?

We tend to stand on the outer edges of the room so if we do get puddles, we place them away from rest of raid. As for me not getting the puddle, that is just RNG I think.