A guide to defeating Operator IX in SWTOR Nightmare Terror from Beyond (TFB) operation.

In Nightmare mode, you can no longer fail any of the phases. Doing so will cause an automatic raid wipe. If you are used to failing purple in hardmode, this tactic no longer works.

The two datacores have to be killed within 5 seconds of each other as they gained a new buff called Dual Core in Nightmare mode.

When one datacore dies, the other datacore casts White Parallel, a 5 second cast. At end of the cast, the remaining datacore gains significant damage mitigation and might cause you to fail that particular color, resulting in the spawn of rectifiers. 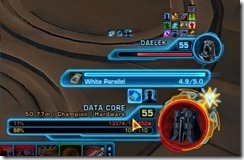 When you don’t have an even number of DPS killing the datacores (i.e. you have three DPS), you can have two DPS help bring one datacore really low and then have the one of the two DPS swap to the other datacore with just one DPS. Then you need to coordinate to kill both within 5 seconds of each other.

For reference, we have our group set up as this way during the datacores. You can get away having two DPS on the consoles/middle during Blue as the timer is fairly lenient. For both orange and purple we have 3 DPS killing the datacores and one of them swap between the two datacores when one gets low. For yellow we have all the DPS free to meet the shorter timer.

The main mechanic change for Operator IX is to not step on color circles that are not your own during Black Obtuse. This means you should stay away from these color circle areas and not run through other player’s color circles to get to your own. Doing so will get you killed in Nightmare mode. 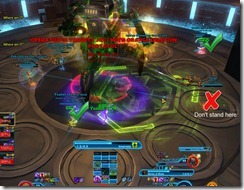