A guide to defeating The Writhing Horror in SWTOR Nightmare Terror from Beyond (TFB) operation.

1) Increased damage: As one could reasonably expect in Nightmare mode, all of attacks from The Writhing Horror deals increased damage but it isn’t that noticeable if you are in full 72s.

2) Corrosive Slime more frequent: The DoT seems to go out a lot more often, requiring healers to keep an eye on the operation frame and cleanse a bit more often. 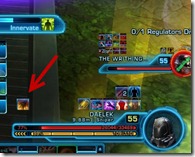 The enrage mechanic is much tighter.

Joined a group to do in Hard Mode but for some reason we kept getting the small adds suddenly appearing attacking us before Male appeared. Kept wipping with sometimes more than one small add apearing before Male. End up killing 4 little adds then Male appears with no adds. It was really screwy. Can’t figure what we were doing wrong or if it was just a glitch.

When submerging, the boss does some kind of aggro drop mechanics. DPS are STRONGLY advised to use any agro-drop abilities when the boss submerges–seems to be about 45 seconds or one minute so can be done on cooldown.

add management is MUCH different than before. Jealous male needs to be tanked near the boss for the dps to get some uptime because the enrage is so close.

Hey guys, I feel like my guild is missing something on this fight. All of our dps are pulling well over what I’ve read is the minimum for NiM 8m ops, but we keep hitting enrage at ~10% hp on the boss. I’m thinking it’s a problem with our tank threat, because we are incapable of starting dps right off the bat, otherwise we pull threat (regardless of threat drops, taunts, etc.), so we’ve been waiting about 5 seconds at the start before popping everything.

My other thought is how we handle jealous male. We have had our 3 range kill the small adds, while our melee goes to the jealous male, and then all on the male after that, but I’m thinking perhaps there’s a better way to handle it.

Overall this fight does not seem that much different in terms of mechanics than hm, but it’s been kicking our asses.

I think you might be diverting too much DPS on the Jealous Male and the small adds. 3 ranged sounds like a bit of overkill for the adds when 1 ranged dps + some healer DPS could cover it easily.

Will try tuning down the add dps then, thanks!

Hey, my guild is just started nim tfb and our first attempts we were able to get the boss to about 8% before wiping. My question is the enrage timer 5min because when we wiped the timer was at 5 min 30 sec and the boss wasn’t enraged. My other question is our top dps is a scoundrel pulling roughly 3100 with the other dps pulling 2200-2400 do we have enough dps to progress through nim tfb? Our dps makeup is a scoundrel,sentinel commando and sage sometimes its commando and gunslinger. We usually put the sentinel on the jealous male when it spawns and have the 2 ranged aoe the small adds with the scoundrel dropping a flyby on the small adds then switching back to the boss.

The enrage timer here was before the nerf, it is a bit longer now. As for your DPS it looks okay, just try to have your dps stick on the main boss as much as you can and only peel off to kill adds when necessary. Don’t want to have unnecessary DPS loss on adds if a single dps can manage it.

Alright thank you Dulfy we will try that tonight.