A guide to defeating Kephess the Undying in Nightmare Terror from Beyond (TFB) operation. 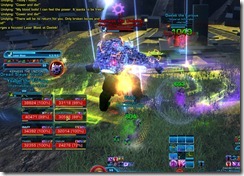 Another major change is the number of Lighting Balls that spawn. Hardmode spawns two but in Nightmare mode three Lighting Balls spawn. We typically have two ranged DPS and the offtank grabbing all three (Offtank can grab Lighting Ball, taunt Kephess to receive debuff, and then have the main tank taunt Kephess back while they run off to cleanse the debuff).

Lastly, you will also want to stop DPS around 52% and then try use the Laser Blast debuff to bring Kephess well below 50% to make phase 2 shorter.

You only have four pillars to cleanse nanites in phase 2 so make sure you are using them wisely.  I like to describe nanites in terms of waves, and the number of waves get reset once you cleanse them with the pillar. First wave will place nanites on three raid members. Second wave will increase the stack of these three nanites to 2 and place another set of nanites on three other raid members (there is a small delay in between). Typically you will want to cleanse the nanite after the second wave lands (i.e. when six members of your raid have nanites). Waiting until the third wave, which would make the first wave of nanites have 3 stacks, is likely to wipe the raid (exception is on the second pillar, where Kephess will likely perform a jump right after the second wave of nanites land so you will need to wait for him to come back before clicking). 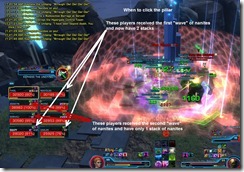 Pillars now get destroyed as soon as the first person that clicks it finished channeling so you will need to make sure everyone coordinate their clicks. Previously in hardmode you could sort of cheese it by having some players click it later and it won’t get destroyed until the last person finishes or stop channeling.

Kephess now have a much longer delay between “jumps” where he place Dread Bomb (red circle) on a player unaffected by the nanite. Dread Bomb hits hard and targeted player will need to be shield by sorcerer/sages or they will likely to get killed at full health. This also means that you don’t want to wait for Kephess to jump and land before clicking the pillar (common tactic in hardmode) as doing so would cause too much raid damage from nanites. The only exception to this is on the second pillar, where you need to likely need to wait for Kephess to do the jump before clicking.

It is also worth mentioning that Radioactive Barrage is behaving a bit erratically in Nightmare mode. The barrage sometimes would switch target and follow someone else entirely. You will need to be aware where the barrage is and if you see it following you, move away from the raid.

Could you please clarify how the aggro-loss in phase one works? Will the tank lose aggro all the time / permanently while standing in the yellow circle or will he just lose it once when entering it the first time? So, for example, would it be possible to pull Kephess inside the circle, have one taunt ready at that time so you can taunt hin back immediatly after he changes the target and then you can go on as usually without any further aggro-loss (as long as you stay inside the circle)? Or will you have to wait outside until 3rd stack of nanites appears and then enter the circle and taunt Kephess back as soon as possible after you lose aggro?

This yellow circle is only in phase 1 so it has nothing to do with nanites. As for the actual aggro drop mechanic, we are not exactly sure. I think it is a permanent drop inside the circle.

Back when we first killed it, the effects of the yellow circle were not really clear and we thought it was bugged until we discussed it with another raid group and watched our videos. Then it seemed that tanks lost aggro while inside the yellow circle and caused kephess to run out of it a couple times.

Couldn’t you have the whole raid group inside the yellow circle, or does it do damage while in it?

I don’t see why not. but you will need to run out when Kephess target someone for the blast. Too much movement can lower dps.