This fight is tightly tuned for nightmare with a very tight DPS check that forces you to utilize different strategies from hardmode in order to meet enrage.

Unlike hardmode, Tunneling Tentacles on on nightmare mode have a very tight enrage timer of around 1 minute. In addition, tanks can no longer simply soak up the damage from exploding Unstable Larva adds carelessly as the explosion hits for about 51k damage if these Larva get near the tank.

This two factors means that you want to burn the tentacles down as fast as possible. For the second set Unstable Larva adds (Larva spawn based on a timer), kill the tentacles before dealing with the add.

When you get to the third set of Tunneling Tentacles, you can ignore and dodge the second set of Unstable Larvas as your raid should get pulled into phase 2.

The Grasping Tentacles in Nightmare mode gain a stacking buff called Hypergate Alacrity with every Slam that decreases the cast time of their Slam attack by 0.25 seconds every stack. This means that the longer you take to kill the tentacles, the faster their Slam attack will be, serving as an additional DPS check mechanic. 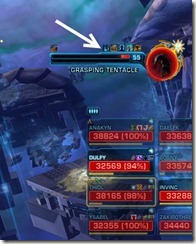 Each Grasping Tentacle spawn Hypergate Anomalies at 70% and 25% of their HP. This means that for every pair of tentacles, you will get four anomalies. Have just 1 DPS (melee works great for this) go around and killing the anomalies while the rest focus on killing the tentacles.

Lastly, at 50% of each Grasping Tentacle’s HP, they will cast a new ability called Creating Inconsistency. This will spawn a Hypergate Inconsistency orb always at the exact same platform. The player at the platform closest to the entrance) will receive a debuff called Inconsistency (healing received by 80%) and a green line beaming them to the Inconsistency Orb. This player will need to run to the orb to remove their debuff and the orb. This debuff it is probably meant for the tank who is coming to the entrance platform to remove their Scream debuff but if you put a healer there, they will get this debuff instead and can deal with it instead of the tanks. 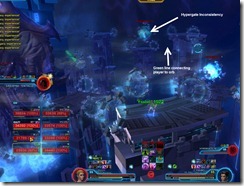 Not much change from hardmode but you will probably enter this phase with the boss enraged or close to enrage. Make sure you kill off all four anomalies from the last pair of tentacles and use cooldowns. If the boss is enraged,  it will one shot the tank so make sure to have a healer on the entrance platform with a battle rez ready to get them back into the fight as needed.

17 replies on “SWTOR The Terror from Beyond Nightmare TFB guide”

Tanks soak the larva explosions on hard mode? We have always had our DPS kill them. Looking forward to giving this a try when it hits live.

Can happen sometimes for us if the DPS is not on top of things. You can survive through it as long people are not low on HP. On nightmare if this happens it can be quite lethal.

Shadows Assassins should be able to use their cooldown to negate all the damage dones from those guys, I remember doing this back before 2.0 in HM. Not sure if that has been fixed thought

“If your DPS isn’t ideal, try to at least burn one tentacles down quick
so you may only get one add instead of two when the second set of
Unstable Larva spawns.”

How would this work when both tentacles disappear as soon as one gets to 0 HP? Or did they remove this mechanic in NiM?

I think there is a small delay before the other tentacle dies when one is killed that is enough to spawn an add. So if you know you are about to get a second set of adds, if you burn down one tentacle really quick that one might not spawn an add. If you look in the video this happened twice where we only got one add to spawn as we killed one tentacle quick.

Do you have any info about the mechanic that causes his hp to get boosted up to about 30%, when entering the furious tantrum? Very hidden mechanic, or a bug?

8 man. It’s been reported by several in the TFB NiM Feedback thread in swtor.com forums as well. Someone even made an own thread for it. Someone from suckafish posted that they thought they found out what caused it, but deleted the post short after, probably to not give others help for the World First race.

Interesting, we have never seen this happen but we only saw the Furious Tantrum phase 3-4 times in total I think. We might do NiM TFB again this week and I will see what i can find out.

I (Amantino) mentioned it here, and the two next posts say they experienced the same.

And someone made a thread about it as well: http://www.swtor.com/community/showthread.php?t=646635

whats more funny is when we tried this boss last night on HM, his health went back to 32% when we killed last tentacle …..

One thing that we didn’t do on that try was we didn’t kill last Hypergate Anomaly, Could that cause boss to go back to 32% health??

small update. Looks like what they did is you now have to kill last Hypergate Irregularity in order for TFB health not to go up to 32%. We did kill all Hypergates in phase 2 and all of the sudden his health rested to 16%. When we left last Hypergate it despawn THEN boss health went to 32% and also Hypergate spwaned as well causing raid wide damage. Looks like BW fixed it in a way that you can’t skip last Hypergate to beat the enrage. It needs to be done by the book now 🙂

We have been getting the Hypergate Alacrity Buff on the tentacles this week on HM already… Did BW screw up here or was this added to HM on purpose as well ?

Not sure but yes I saw it on HM the other day as well.

How to you get your op members health bars that big?

Probably by pressing ESC and going to edit interface or whatever it’s called. and clicking your OPs bar and adjusting the settings