Euro players: This card may not be redeemable on European SWTOR accounts as the card is stated to be valid in Canada and US only.

Bioware have not officially announced this but players on the forums have reported the sighting of Glided Flutterplume pet . Upon further questioning, it was revealed that these pets come from the 2400 CC Cartel Coin cards players can purchase for $20 from Walmart in the US. The card itself is not listed on walmart’s website and is in-store only. 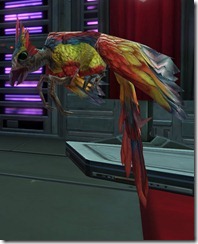 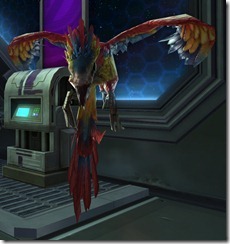 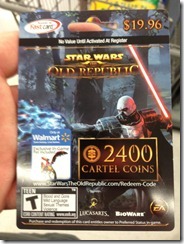 If you have anymore details on the acquisition of the cartel coin coins and the bundled pet from Walmart please post it in the comment below.

Wondering about Walmart in Canada. If someone knows any details weather it is available there as well, I’d appreciate it.

I can confirm that these are an actual card, not just a code like at Best Buy/Gamestop. They are in the Entertainment section and are hanging with all the other redeemable game cards. I just purchased one here in Nevada, and it redeemed instantly back at the house. No problems.

I live in the usa, id like to discuss buying one of these from you because they don’t appear to be available in my area. email me at boxbank2@yahoo.com please. ty.

Hey man, i was just wondering if you would do me a huge huge favor and get one of these cards, then send it to me here in Australia?? I’ll make it worth your while 🙂 say $50 plus expenses?? Yes??

These could be bad news for EU players.
Card states on the back, “Valid only in the US and Canada.” I tried to trade two with players in the EU and they got errors and could not get them to work 🙁

I like this pet a lot, kind of Phoenix-y
And then I ofcourse can’t get it 🙁

I’m in NZ, and I was able to successfully get this pet (a friend in the US bought the card from Walmart) – customer service gave a work around for the code as it doesn’t work via the usual method – http://www.swtor.com/community/showpost.php?p=6401809&postcount=7 (though I submitted an in-game ticket with a link to a photo of my card’s code)

If you are having trouble finding them in the store, here is some information that might be helpful. The brand of the cards is Fastcard. They sell this type of card for several different games. The card showed up as EASWTO at the register. Not every store seems to have them. I had to go to two.

Apparently, the codes from the Walmart card are having issues due to some sort of mixup between Walmart and EA, which means that a number of people who used the Walmart card are getting website errors and codes used without actually giving the people the advertised coins or pet.

If there is every a fix let me know please

Well, if you retained the card itself and submitted a photo via e-mail of the card’s front and back to Bioware’s SWTOR customer support, they’ll help you with the problem. I found Bioware’s customer support staff surprisingly helpful in this regard. Takes a week or two for them to resolve the issue. You may also want to call them via their telephone line for additional assistance.

Just went to Walmart and the card says, “Exclusive starship pet”. This flutterplume pet is no longer available. I believe Walmart’s pet is now the M-7 Razorwire model.

Hagnoffarl Pet: I got this from a mob next to Lord Darkspanner