Some screenshots and information on the upcoming Bounty Hunter in patch 2.3 from the LA Cantina Tour provided by Phinn of Comfortably Numb on The Harbinger.These images are all located on a thumbdrive given to participants of the Cantina Tour.

Here is the PDF file included with the thumbdrive, basically outlining the items contained within. There is also a wallpaper. Note that this event will be with patch 2.3 in august and available to players level 15 and above. 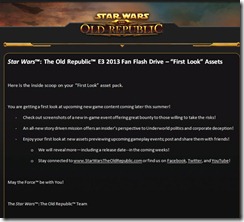 Clarifications on the event from Bioware

The first thing which led to some confusion is that the new event coming around Game Update 2.3 is called Bounty Contract Week, not the Bounty Hunter event. We didn’t mean to have the added confusion around implying an event was named after a class. Bruce gave a little bit of information on the event, here.

Even though it’s part of Game Update 2.3 we are planning to start the Bounty Contract Week on August 13th. Bounty Contract Week is a monthly event, so if you miss it the first time, don’t worry – it will return next month! The event above was actually teased in our Community Meet & Greet last week and we’ll be sharing more details soon. Here is a snippet for now:

Bounty Contract Week provides new missions with full voice-over that will take you on a hunt for high-value bounty targets across the galaxy. Each bounty contract scales to your level, from 15 to 55, providing experience, credits, Commendations, and Reputation with the Bounty Brokers Association.

Now, onto the screenshots! First was some incorrect armor screenshots. There were two new armor sets shown. One of them is not actually present in the game in that color variation which you can see here.

The other, is in the game in 2.3, but it is a part of the new daily hub reputation not the Bounty Contract Week rep. You can see that armor here.

As a note, this armor has changed slightly. The colors are a bit more vibrant and it has some new "attachments," I am going to work on getting an updated screenshot.

What you will want to see are the new armor sets that are rewards for the Bounty Contract Week Rep! Here they are, reward 1 and reward 2.

We sincerely apologize for any confusion.
-eric

The first thing to note is the New Hangar Decorations featured in the upcoming Bounty Hunter event in patch 2.3. 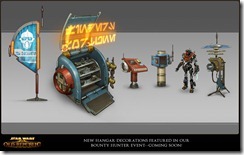 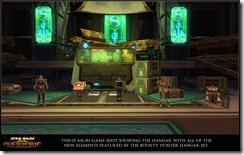 Here are some pictures of the Imperial Hangar that servers as the base for the Bounty Hunter missions. 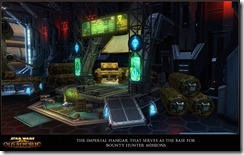 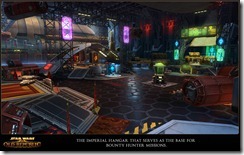 New armor you can purchase as a reward when you are successful in your bounty missions and earn required reputation. 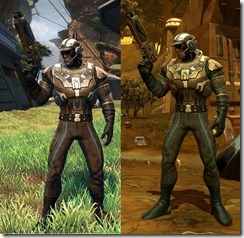 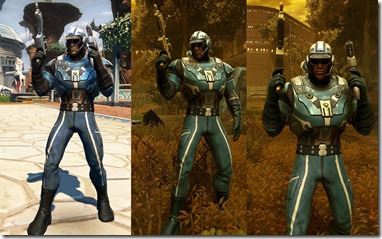 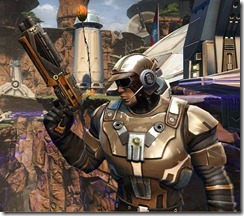 New mission item you can deploy as part of the event – The Interrogation Probe, to pry information from a shady character. 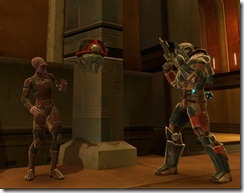 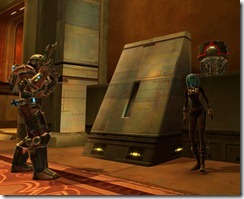 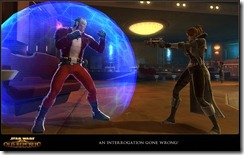 New Tatooine Bounty Hunter mission boss that you will kill or capture. 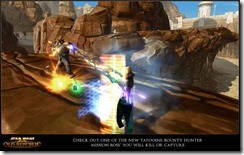 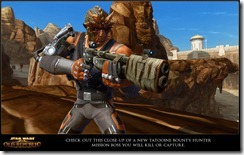 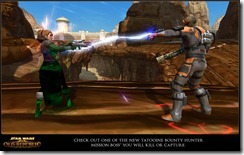 This appear to be another boss on Hutta. 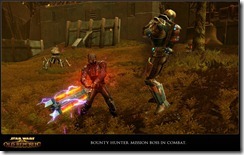 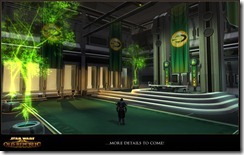 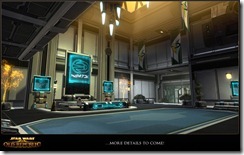 Here are some screenshots of bounty hunter avatars, likely to show the new graphical improvements in patch 2.3. 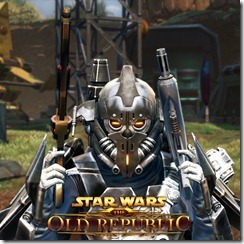 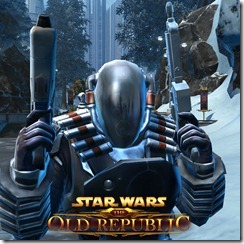 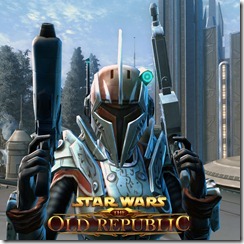 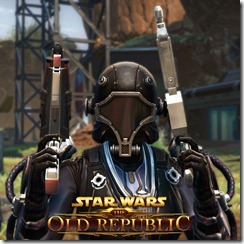 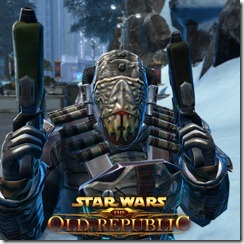 Just making sure I am seeing this right. By hanger they are possibly referring to where your ship is right?

i would like to think so but I didn’t attend the cantina tour so I am not really sure.

They did not discuss what was on the flash drive at the cantina event so my guess is as good as yours.

I think it’s more of an area like the Makeb Orbital station.

Im pretty sure its not. I think they are refering to a separate hangar for the event.
Looking at the pictures (especially the ones where you see a large portion of the hangar) there seems to be no room for a ship, so most likely it is in its own separate hangar.

Nothing new about SSSP? Anything new from the Q/A on the Cantina Event? Is the only info we got these pictures from an upcoming event?

I gotta be honest. I was disappointed by the “Q&A” portion of the cantina event because they were so tight lipped. I can go to the forums if I want tight lipped devs. And no they did not mention anything new about SSSP. Or, anything more than they did in the video they posted earlier this week.

The best part of the event was the open bar which was NOT a disappointment.

So is this a Bounty Hunter only event? Or are other classes able to participate?

Pretty sure other classes can participate as well.

I think all classes are able to do this. The event is probably rounding up a bunch of bounties but you don’t need to be a bounty hunter to participate.

it sounds great for me though I noticed that every time you changed Hangar to Hanger eg. Hanger Decorations and so on. That looks kinda strange, Dulfy 😛

Ty for the correction, it was a typo hah

Looks like a fun event! I really like that beefy new pistol, looks like one of my favourite Vanguard rifles in pistol form. I just hope it sounds powerful, and they don’t throw on the “veep veep” or “plink plink” sound effects they usually give pistols. Don’t they know it’s not enough for a weapon to look cool, it has to sound cool too?

What I want to know about that “pistol” (apart from the sound 🙂 (which I hope is a “boom boom”)) is: can it be dual-wielded?

If “yes” (to both), that will make my day!
I can already see my Mercenary pointing 2 of these at a mob. I won’t even have to pull the triggers: they’ll just die of fright! 🙂

Any idea if this event will introduce a new reputation faction?

I should have just used Ctrl+F 🙂

Thank you Dulfy & Phinn of Comfortably Numb on The Harbinger. Look forward to seeing how this story unfolds!

Really dig the idea of a new event and the graphics seem sharp.

The “More info coming soon” screens seem to tease the idea of a reputation lounge? Only X Rep and above can enter, maybe?

By the title I was hoping for player targets, but alas, I suppose I’ll have to resort to just camping the route to the NPC spawn. ;p

Anyway, good works as always, and thanks!

For everyone asking if it is bounty hunter only, one of the screen shots has a gunslinger in it. 🙂

We don’t know that for sure. That could be a picture of a bounty hunter with cartel armor on, making her look like a gunslinger.

I’d actually like them to keep this BH only. Make quests for each class or activities that fit with the class. A Jedi running around collecting bounties seems a bit weird to me.

But it could be a Jedi running around arresting criminals too dangerous to be left on the loose. 😉 Keeping this BH only is actually a terrible idea from a designers stand-point. They need to maximize the usage of every bit of content they give us.

So…make a whole event for a minority of the population? When do I get a knight event for mine? Or a agent? There is a new event once every 6 months or so. Making it so that only people from 1 class can participate would be a terrible idea.

You obviously did not look at the pictures or read any of the comments.

I’m well aware that its for all classes, and know it would make 0 sense for them to make a class specific event, and the amount of time and resources it would take. I was pointing out keeping this class specific would be just that, and waste.

Could be the cover from a dead NPC, still standing arround.
😉

And still no real Mandalorian Armor? Lame bounty hunter armor as a reward for all this. This should be when they re-introduce the Crimson Mandalorian Armor they had as Social Armor in Beta testing back into the game. It’s still embedded in the game code for crying out loud.

1: that armour is already in the game, so that might just be a re-dyed version (ie. nothing telling us that its a cartel armour) and
2: thats not really mando armour. Yes, i know mandalore wears it, but its not what people refer to when they say mandalorian armour.

Are the hangar decorations only going to show up in our hangars for the duration of the event or are they decorations you can place there…?

You misunderstand. It’s not the Bounty Hunter player hangar. Its a new hangar on the fleet like Ziost etc. with event missions and vendors.

It is pretty misleading. It shows an in-game shot of the new elements featured in what they called “The Bounty Hunter Hanger Set”. The bounty hunter hanger set sounds something like a reward… I mean… its a “set”. for them to show a “set” of decorations for a random hanger seems rather pointless, unless the “decorations” were going to be put to use for something. Like a reward.

Did anyone else notice behind the Bounty Hunter in the second picture is a new Paintjob on the class ship?

What is new about it? I can’t see any differnce, it’s the same grayish beige/green with yellow stripes.

I think Magnus is used to seeing all the green on the bounty hunter ship, (there’s a lot of green on it) but the green sections aren’t visible from this angle.

Bounty Hunters? So we can place actual bounties on real players that have done us wrong?

This will be too awensome, so is not like that 😛

Jonnymaddog on Jedi Covenant would spend his entire time online being dead.

I still hope the guns will have nicer sounds than the average blasters BioWare created for this game. But I know I will be disappointed very hard.

Dont bet on it, there are some pretty sweet sounding blasters in the game if you just know where to look.

those rewards look hidious, glad I’ve finally cancled my sub and switched to free to play,

yeah switching to free to play with result with better content, dont worry. taking away the money they use to make stuff is definitely the smart move when complaining about content. screw off freeloader

I agree with Kazra. We asked about bounties over a year ago.

I think this would be awesome if they did class based events like this! With it’s own rep system! That’s a way to keep me involved. Awesome work Dulfy, you delivered yet again.

Does anybody know what that last armor set is called? (Bounty hunter 5) I think I remember seeing something similar to it a long time ago in a trailer, but have never actually seen it in the game.

Please tell Vogga the Hutt, the Hutt on Nar Shadda Docks in KoTORII, is involved in this. Hutts can live hundreds of years, plz include him.

What i hope is that the quest are like this:

“Go to place X;Y and kill mob Z” and we have to move around like idiot from planet to planet.

I hope to se a sort of “investigation” quests.

What i hope is that the quest are not like this:

“Go to place X;Y and kill mob Z” and we have to move around like idiot from planet to planet.

I hope to se a sort of “investigation” quests.

[…] The new live event coming in Game Update 2.3 is called Bounty Contract Week. Images for the event were given to participants in last week’s Community Cantina, summarised by Dulfy. […]

Talking about people without a life attempting to impersonate others. You’re pathetic and definitely not Lacedaemon. (<- Check your spelling btw.)

I hope they open up more areas per planet to search for the bounties. They should try to expand all the planets and have random world bosses spawn somewhat like they do in Rift.