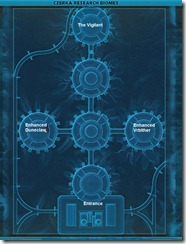 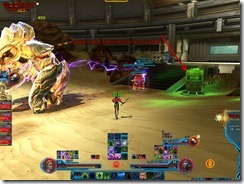 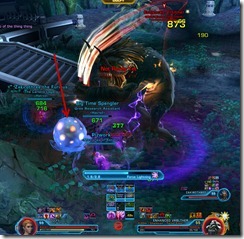 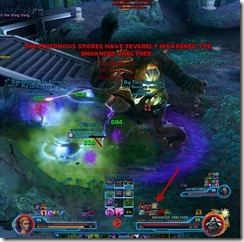 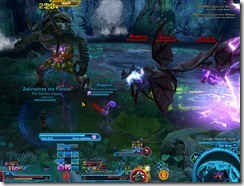 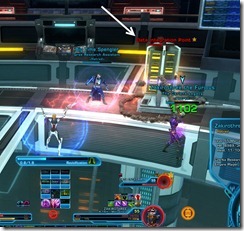 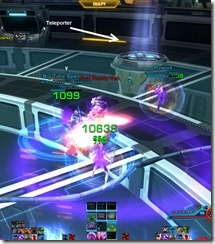 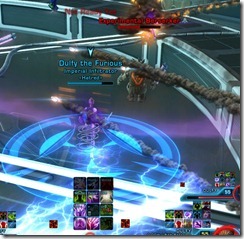 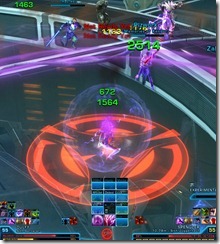 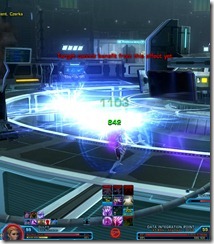 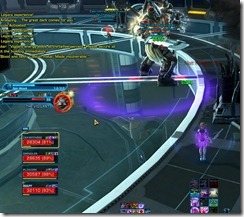 Thx, lightning quick as ever 🙂 What’s the loot like, same as in other 55 HM FPs? Items for Reputation gain with Acquisition Corps / Adjudicators?

Black Market/Arkanian stuff on the last boss and you may get a rep item with the new daily area rep.

Is there a quest associated with these Flashpoints besides the Czerka Weekly quest from the new CZ-198 Daily area? What are its rewards?

So how does high random damage fit into role agnostic queueing? can new FPs be completed without a healer and/or tank?

Thanks for the quick info as always.

Oh okay. Thank you for the clarification.

Random damage isn’t actually random – it hits the person closest to the Vigilant when the core goes down.

Have heard these are pretty easy even on HM. Did you find that? If so do you expect that they will buff the FPS difficulty as they did Nightmare TFB when it went live?

They are alright. I think some people are running them in full Arkanian/Underworld and they may seem a bit easy. I am running in full underworld myself and I do find them a bit easy except for the last boss. They may tune up abit as some people have complained on the forums. However, those flashpoints drop Arkanian/Black Market stuff in the end so higher difficulty may not seem necessary.

I’ve just finished this on HM now that’s it’s gone live, and i have to say the last boss is probably the easiest 🙂 dunno what gear the rest of the grp had, but atleast arkanian lvl.

In the Duneclaw fight, is it randomized which generator lights up or has a pattern been spotted?

For some reason i read the patch notes as saying there was 1 new flashpoint each for empire and republic. Looks like i read it wrong.

Is there any story differences between each side?

This must have changed since PTS. Duneclaw’s rampage wouldn’t destroy the Sandstorm Generator unless the tank was near the Generator, and his fists actually had to come down and rampage on top of the Generator.

It wasn’t. Guide is wrong – non-tank player can stand there forever and generator will NOT blow. Movie is correct – tank needs to drag boss and position him correctly.

This is my experience as well. Dulfy may want to update the guide to reflect the correct information.

Thanks I updated it, havn’t had time to run it on live yet 🙁

Does the last boss in meltdown only drop a specific ark piece or is it a random?

Ark ear when I went through too

Just finished HM, and it droped Ark Ear for us aswell

Dropped Ark Implant for me once and I think also a pair of gloves didn’t win the rolls so not sure but pretty sure it was different pieces.

Duneclaws rampage isn’t killing the generators for me.

During final boss, when we were about to finish destroying the cores, we had a problem. Core nº 7 was nowhere to be found. The boss kept casting the bolt dots on players, but the core 7 just wasn’t there. We exit the phase, reset it and one-shot everything again (whole flashpoint reset). Just wanted to let you guys know if you had the same problem, that you’re not the only ones.

I’m not sure what’s going on… first three rounds of this flashpoint went fine, but my fiance and I decided to run story mode today and as soon as we destroy the Data Integration Points, The Vigilant becomes enraged, making it impossible for us (Tank and Medic) to 2 man this Group 2 Flashpoint.

On the last boss: when you damage the “upstairs” cores, there is party wide damage. The ones on the ground don’t do this so make sure the last core you destroy is on the ground. Makes healing a bit easier in the last phase.

Duneclaw is very difficult for some reason on my juggernaut tank. Unless I unleash (remove all slowing / stun effects) I will NOT make it to the generator on time, and since it’s on a two minute cooldown i can only do it every other sandstorm… is it supposed to be that difficult or am I doing something wrong?

You can target the generator and use Intercede to leap to it once you’re
within 30 meters. That should give you plenty of time if you keep the
boss in the center of the room between sandstorms.

i cant keep my team alive during rampage

Isn’t Black Market gear enough? I’ve tried to heal everyone, but they were dying quickly at the very first boss. I’have been told that was my fault. Was it really mine?

since the 2.8 patch I have seen some changes with the final boss. The most notable was that I’ve seen him come down after destroying all the integration points and then after a few seconds jump back to the middle and 3 integration points would respawn.
this happened several times for one particular run when the tank suggested we destroy the integration points in order, one right after the other. That seemed to stop the respawning/resetting

If the tank doesn’t get the Sand boss on the barrel ASAP, it’s 4k every player every 4 seconds AND rampage.

The duneclaw is a huge challenge even in tact mode with a pug group, especially without a dedicated tank to drag the boss around to the tanks. The problem is most pugs don’t know what they’re doing and are incapable of following simple directions. Basically, I consider this FP unpuggable.