Before your party can encounter the bosses in this flashpoint, you will be tasked with finding Security Key Alpha, Beta and Delta. These keys can be found a room on each of the three levels. They are located randomly but you can easily find them using Macrobinoculars. 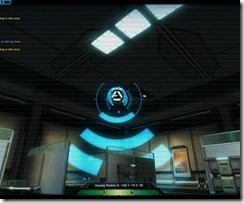 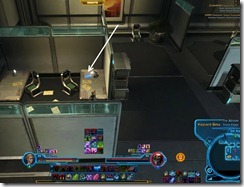 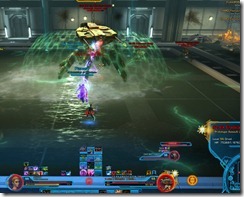 Chief Zokar is a boss that gains new abilities the longer the fight goes on. He will disappear and port to another corner of the room occasionally. In doing so, he will gain a stack of Weapon Arsenal buff and gain new abilities. 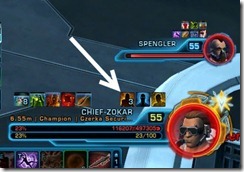 His basic attack is Shotgun Blast, a nasty conal attack that is well telegraphed and avoidable. At 2 and 4 stacks of Weapon Arsenal, he will also summon little droid adds to join the fun. 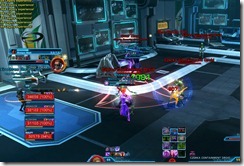 A note on the trash mobs before final boss 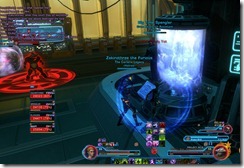 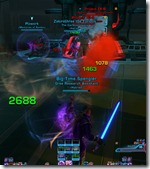 Rasmus is a fairly easy fight if you understand the mechanics.

Rasmus will periodically spawn an add from one of the 8 Kolto tanks that line up the side of the room.

Is it really as easy as it sounds?

I solo’d HM with a Gunslinger (admittedly in full 72’s) but found it easy – http://youtu.be/J6AIBvc4TqA

tanks can solo SM in 66’s no sweat

what do they drop? just black market items like other lvl 55 FP’s?

also is there specific ones? or just random

oh wow nice, and thanks

He dropped the un-assembled Arkanian earpiece for us last night.

Oops, it was actually The Vigilant from Core Meltdown that dropped it, sorry.

Dulfy, is there a quest for this flashpoint? If so does it drop rep tokens? What kind (quality) and how many (quanitity)?

You seem to have missed a mechanic in the last fight (though you noticed it when you capped the fight). Ramsus has a stacking shield buff, and I’m guessing you pick a blue mob near him to remove a stack.

You can obviously completely ignore the mechanics (hell we 2-manned HM with companions), but given the way ops mechanics are recycled in flashpoints this is either designed to aid practice for NM Thrasher/Kephess or some upcoming ops fight.

Hey Dulfy. You might want to update the page. As Bioware has increase the difficulty “significantly” on the PTS

Rasmus fight seems to be bugged on hm. we’re releasing the correct colors when he pops an add out but most of the time they are not attracting to one another and just beating the party down :/

dps the add you release about 5% or so until he starts pulling the other add to him.

We had to wait till it said it was about to do chemical attraction before we could release another or we got pounded.

Just to add here that we have just tried it on live server last night. This fights on video look piss easy comparing to the ones that are on live now. Droid have close to 900k hp, and you can no longer hang in water during his shield phase. Damage is too high to be healed through. Same goes with other bosses. Every damage is pushed way up. So, to all of you that are wiping and have no idea how Dulfy managed to make it look piss easy, blame Biofail 😉 Working as intended. We wiped on drodi 4 times, on Zokar 3 due to his crazy 24k hits from rocket attack (not even seen in video), and yes we did tried to avoid it, but sometimes it worked sometimes it hits you even you were quite away from the circle on the floor. We havent wiped on last boss tho… Not too shabby for first try.

All of the bosses are very healing intensive, so unless you have good healer, it will be quite hard.
Other than that, mechanics looks more or less the same.

I solo’d it on a 55 gunslinger with my healer toon last night. Hardest part was Chief Zokar simply because of his knock back and as a turret (MM slinger) was just annoying to be knocked back as I was lining up the big skills, lol.

Found Rasmus easy. I didn’t spawn any of the other tanks, i simply killed each NPC that Rasmus spawned then turned back to him. He was easier the the chief…. But I’m sure he’ll be back

And Dulfy, grt work on this site. After google, its my go-to place for SWtOR guides and even then google brings me here a lot of the time.. 🙂

What did the bosses drop?

and ofc, the fun of doing it 🙂

I know there is a one time quest, Titans of Industry associated with these FPs. Does anyone know where the breadcrumb quest starts? Might be worth Dulfy including.

Ya is right at the entrance to the planet, there is a droid there with a quest icon over it. You can’t miss it.

I noticed that if you want to make the TG-5s and EK-8 attach on HM, you’ll have to damage the TG-5s (blue ones) a bit first.

Why wait till the blue and red adds spawn? Does it make any difference if the players open a blue-red pair of tanks by their own?

I know this is an old article. And I doubt anyone this will actually apply to, will read this.
When the adds spawn on the 1st boss (CZ-8X), I sometimes see people in Group Finder, completely ignore the adds entirely. This is WRONG.
Periodically throughout the fight adds will spawn. For the most part you can ignore them. However, they will steadily move closer to certain parts of the map, most notably around the boss. The current misconception, is that the adds are neutral until attacked. That is not the mechanic. If that were the mechanic, likely the adds would be YELLOW, for NEUTRAL, and not RED.
Instead, the mechanic of said adds DO operate on is PROXIMITY. If you get within 10m of the droids they will see you, they will attack you. Perhaps, when CZ first came around, this was not the case. But since I came back to the game, a year ago, it has always been this mechanic. If the adds (especially the ones that gather around the boss) are allowed to persist, when one of the members of your group is pulled by the boss, all 3-6 adds surrounding the boss, will attack you, and you will likely die, unless you pull some sweet ninja CD moves.
The easiest way to avoid this insta-death and the aggro healers persistently get over this, is to have ranged dps like Mercs, Snipers, and Sorcs, unload either a DFA (Death From Above), OS (Orbital Strike), or FS (Force Storm), next to the boss, on top of the adds. This will more than likely kill them, do damage to the boss, and protect your team from wiping. If you only have melee dps, the trick is to not allow them to pile up together, clear whatever adds approach immediately, so that you only have to kill 1 at a time.
I PROMISE you, if you do this, it will be way easier to beat the first boss.
Clearing the adds on the edges that are near your planting spot (You should always have your ranged and heals sitting south end of the room near the edge of the water, least amount of distance to run, and actually keeps you away from the adds that spawn on the sides the longest), is a wise idea when the electrocution phase is going, and his shield is up. Reduces the risk that the encroaching adds will shoot your healers when at the ‘camp’ spot. However, if your kinda under geared dps wise especially, just clearing the adds around the boss should be suffice.
If you see someone in the GF tell you the adds will not aggro unless attacked, please send them this way, and read this comment, because I would REALLY like to kill this myth once and for all. And just ask them to TRY it this way, ONCE, before ditching the run. Seriously.

I can tell you for a fact, that ever since Czerka FPs came in (which was less than a year ago), nothing changed, and I healed them (both SMs and HMs) ever since they were launched. I have no idea about the proximity you mention (meaning if they aggro if you’re <10m) but the sole fact that they are inscribed in red doesn't mean they attack. Funnily enough, I am pretty sure I was less than 10 meters from some and they didn't attack me. Anyways, whether they did or not, the damage is minimal, if you know how to heal, you will have no issues healing through the fight, with the adds gone during or after the fight.

So I am just imagining the adds shooting me if I accidentally roll by them? I am just imagining the adds are attacking people when they are around the boss, even though I see them shoot their little rail guns, hear the sound of the mechanic, and see health drop extremely fast? Your right, the damage is negligible when only one is shooting you, its not negligible when you get pulled into the water during the electrocution phase, and then have three of them shoot you at the same time. When I have people clear the adds near the boss, no one dies, it takes two seconds, and if you have ranged dps, they can’t even fight back, so I can clear it over and over with my kind of low geared operative healer. But as soon as I get a P.U.G., who don’t clear the adds (AROUND THE BOSS, NOT THE WHOLE ROOM), we wipe. And that is because I am a bad healer? Even though the only thing that changes is my Guild groups clear the adds, and the GF does not.
Operative heals are pretty easy to do, and I follow the priority guide on Dulfy, and not to mention, have been playing SWTOR since BETA launch for 2 years. Admittedly I am a better MERC healer, but when i can heal through DF and DP in 69 gear on an Operative, I’m pretty sure I have a handle on how to heal, especially through Czerka Labs HM(I don’t mention SM, you can heal through that with only your Kolto Probes).

2.7 fixed the issue of the adds on CZ-8X Eradicator Droid not attacking if you’re not close to 10m and now come out shooting at the healer of the group. Since it is random for the adds rDPS have an easier chance to take them down vs mDPS but also depends of the gear now for heals not to be overtaxing and burn out too fast.

This use to be kind of easy before 2.7 update and now it almost feels like Lost Island’s 1st appeared before they nerfed it.