GW2 Quartz Crystal guide with their acquisition, fusion into Charged Quartz Crystal, and their usage in the new Celestial recipes.

Quartz crystals are a new crafting material introduced with the Bazaar of the Four Winds patch.

Mining: They can be mined from Labyrinthine Cliffs and  your home instance exclusively (once you have received Gift of Quartz from Bazaar Ambassador meta achievement). 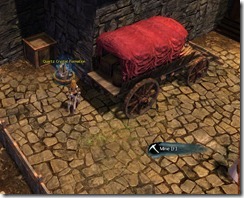 Kite Baskets: Kite baskets you find in various open world zones (except for Orr) yield a small number of Quartz crystals when looted. Each location can be looted once per day. 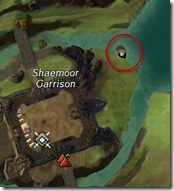 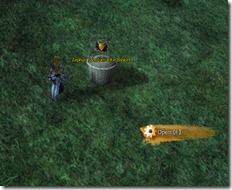 Zephyr Sanctum Supply boxes: These supply boxes give out Quartz crystals in addition to Celestial recipes. More on those Supply boxes below.

Trading Post: Since Quartz crystals are tradeable, you can always buy them from other players.

The easiest Place of Power to reach is the one outside Shaemoor Garrison in Queensdale. 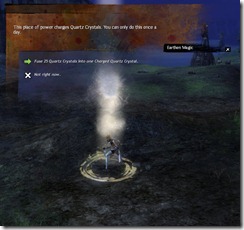 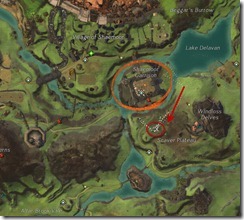 Charged Quartz Crystal is required to craft the new stat combo introduced with this patch: Celestial.

Celestial is an all stats combo, something previously only found on Ascended gear. Recipes for Celestial insignias/inscriptions can be found randomly in kite baskets (low drop rate) or as guaranteed drops from Zephyr Sanctum Supply Boxes (Since each Insignia/Inscription requires 5 Charged Quartz Crystal, you will need to wait 5 days before you can make one). 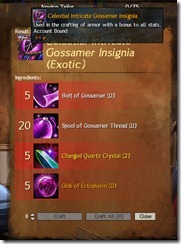 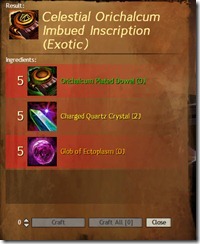 Zephyr Sanctum Supply Boxes are boxes you can purchase from the merchants near the Bazaar Docks Waypoint in Labyrinthine Cliffs. They will exchange various raw crafting materials and previous event items for boxes. Each box will contain 1 Celestial recipe and a number of Quartz Crystals. Here is a list of what you can exchange for these supply boxes. 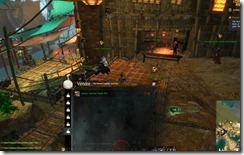 Items that can be exchanged for 1 Zephyr Sanctum Supply Box

Finally a use for my 8k pieces of Zhaitaffy spread across my characters.

i wish jorbreakers bought some, as i have several, and they should be worth something as well here

yeah I thought they are useless and sold/destroyed them all…

I dont want to sound bitter, but all that will require quartz are new celestial insignias, which are, imo, useless?

I’d disagree. There are a good number of builds which run celestial accessories and runes of divinity, specifically in WvW and PvP.
I know I’ll have several guildies happy to see this.

Although it seems like everything from quartz to the finished equipment will be account bound, which is fairly uncool.

Yeah point taken 🙂
Still, my question stands – is it all ?
All I can use quartz on are celestial insignias ?

I havn’t seen any recipes outside insignais/inscriptions at this time but I only opened a few boxes though.

well you can trade quartz itself, just not charged quartz from what i was reading

Don’t get me wrong, zerker is still going to be the pve meta… but for something like elementalists… this will be fantastic.

No what it means is that you can either exchange 500 rawhide for 1 box, 400 thin leather for 1 box, 250 thick for 1 box, or 8 orichalcum ore for 1 box. All the mats are independent from each other.

Oh okay, thought so. Thanks for clarifying dulfy! 😀

Guess I shouldn’t have converted my Zhaitaffy for Jorbreakers to free up inventory space.

Can you only make multiple Charged Quartz Crystals if you visited different charging locations or did you try that?

That’s annoying I hope they change that, it would take 30 days just to make a full set of armor and 40 days if you include 2 weapons….. Can you get charged crystals from Sanctum Supply Boxes or anywhere else?

Excellent! 😀 I was hoping that the recipes would be tradeable, because it’d be a HUGE pain if you were after one specific recipe and had to open dozens of Supply Boxes to get the one you were after.

And have u tested to craft celestial gear to see if it’s accound bounded or not ?

No I have not

is the recipe just for armor or weapon too?

Clever tactic from ANet to suck up all that excess supply of Silk Scraps and Thick Leather Sections too. 😉

DO SUPPLY BOXES GIVE OTHER THINGS LIKE WEAPON SKINS ETC

No, weapons skins are obtained via achievement points 1k each and you can withdraw as many copies as you wish.

Will supply boxes be around permanently?

I am sure they will go when the map is locked, but you can still have hope, a little of course. But recipes are tradable, quartz is tradable so no problem if they dissapear

Might be gone after the zone goes away in 4 weeks since the merchant is inside the new zone.

How many Quartz are in a box?

# of quartz in sanctum sprint boxes are random too, I got anywhere from 2-6

I watched the livestream and de got 6 there, so i thought it was fixed rate, my bad 🙂

No worries, i only know this because I did a sprint and got only 2 crystals once 🙁

Did a sprint a couple of times and once i was on 7th and got sun catcher and 8 quartz. So people who cant win no worries you can also win catchers too or buy them off of TP, 1st place just has extra luck.

It appears the recent patch removed the Quartz Crystals from the Sanctum Sprint reward chest. 🙁

I am also wondering about the long-term viability of obtaining Quartz. When the event is over, what is left besides the Personal Quartz Nodes, which translate to ~3 per day and account, 8-9 days to get 25 to charge them. So the daily limit for charging Quartz seems to apply only for the meantime, while in the long run the actual limit is the acquisition of more Quartz crystals.

Does someone know the exact stats that these celestial insignias/items give ?

Yes uploading them some pics now, check back in an hour

Hmmm.
Do you require the insignia recipe as well as the armour piece recipe to make one item, or can you “discover” it with the insignia?

Would love to know this too. 🙂 However, seeing as how there are recipes for each kind of weapon/armor on the TP, I’m guessing you need to know the armor/weapon recipe in addition to the Celestial Insignia/Inscription recipe.

This set will replace any kind of mf sets 🙂

Heya Dulfy. What is you in-game name? Also, if you have a guild, is it recruiting?

Do you need the specific recipe to make the gear, or can you make it using discovery?

Ohh thats why some recipes are going to the roofs =P
But some of them rising makes no sense, by that I mean the accessories recipes. By the time you’ve gotten full Celestial Exotic trinkets you could’ve gotten the ascended counterparts .-.

Thank you for putting up armor specs. Been looking for what celestial gear would look like. Any idea when weapons and off pieces like amulet, accessory and rings will be listed?

Hi Dulfy, have you a list of the different recipes found in this patch. I got 3 yesterday from Kite baskets (not Sanctum Supply Box)
Thanks for your answer

Dulfy, in this image :http://dulfy.net/wp-content/uploads/2013/07/gw2-celestial-heavy-armor-set.jpg , you put the celestial draconic helm twice (1st and 5th) and forgot the boots.

Whit 1 Charged Quartz Crystal per day and my 8 level 80 profession, i’m gonna give you all a feedback about my armor and weapon collection in a year, waiting for summer 2014, or maybe there will be ascended armor by that time 😉

Celestial gear isn’t for all characters though, yes 140 all stats and 19% crit is nice but only professions that screams this gear is elementalist to me.

Yes, Elementalist will be my first alt whit this armor and then Engineer, but i’ll replace almost all my magic gear whit that

You will see quite a few WvW Guardians going Celestial.

Do I have to buy a recipe of (for example) Draconic Chest to craft it?

Yup, you can’t discover the recipes.

This really sucks. Recipes are like 25 gold now on tp. 🙁

And now they aren’t more than 20 silver

Do you know if the Quartz will stay when the event will be over?

is there any pictures of what the armor looks like?

It is the exact same as the current existing skins of the exotic armor you can craft.

Where is the place of power to combine the quartz crystals?

Read what is written under Charged Quartz Crystal Acquisition

An easier place of power would be the Ice Worm just outside of Hoelbrek. 0 hostile mobs and arguably a shorter run.

The Celestial recipes are actually not a guaranteed drop from the Supply Boxes, they only have a very high chance to drop. I opened 20 boxes and had one that did not contain a recipe, only 6 quartz crystals. Wiki says as well that the recipes only have a high chance.

I can confirm that the celestial gear is account bound, just crafted my first piece today. Got all the Jewelcrafting recipes on my Thief so I will screenshot those in a bit and post them.

These are the 3 Charged Quartz JC recipes.

You can actually get Charged Quartz Crystals from your home instance as well, even though i’m not sure about the chance to get one.

“The easiest Place of Power to reach is the one outside Shaemoor Garrison in Queensdale.” Not really, much easier to go out from Hoelbrak to Wayfarer Foothills, up the stairs to where you do your first boss fight as a norn, and it’s right there. Much closer than the one in Queensdale, near a city, nearby Waypoint is never contested, and no enemies around to interrupt while you’re communing/crystalising. 🙂

does charging the crystals go away after the bazaar events? (hope not, dont have all the pieces yet D:)

The skillpoint in queensdale is not the easiest, the easiest one is the one in durmand priory right next to lion’s arch. It’s extremely short and never contested, also very close to lions arch so using waypoint won’t cost much

Concerning the Quartz crystal shard nodes in home instance, where are they located? I used that item on my human character, and now I can’t find any crystal nodes to mine. Also, relatedly, I just used my Krait Obelisk Shard so I will get one in home instance again. I guess I need to know what is meant by home instance? Thanks and any responses are greatly appreciated.

I figured out what was meant by home instance. Sorry for the inconvience.

thanks for the guide!
And… how can i get the recipe? there aren’t Zephyr Sanctum Supply Boxes, actually, are they?
Thanks 🙂

You missed the updated by a couple months. Check the black lion weapons vendor, he may still sell some