A guide to defeating the seven bosses in SWTOR Nightmare Scum and Villainy operation introduced with patch 2.2.2.

Note: This is a still work in progress. Currently 4/7 of the boss strats are available. 6/7 of the strats should be available later tonight.

Note 2: This guide assume you are familiar with hardmode mechanic, if not please use this to refresh. 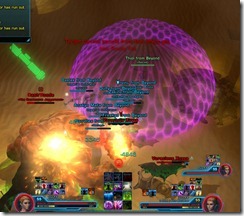 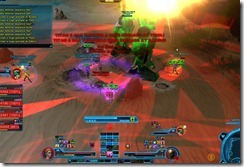 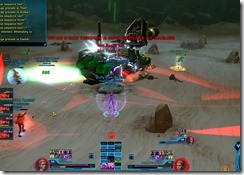 Thrasher is not an easy fight and you may get stuck on him for quite a while. In addition to the high damage output, there is quite a bit of RNG that can make this fight really frustrating. 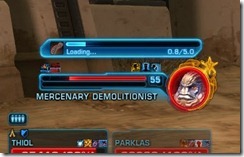 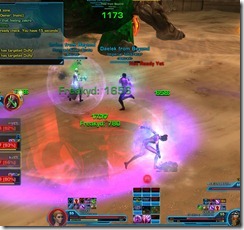 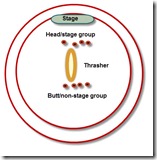 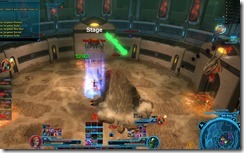 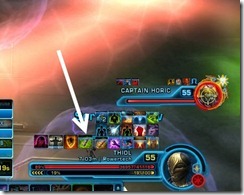 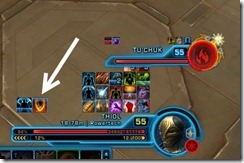 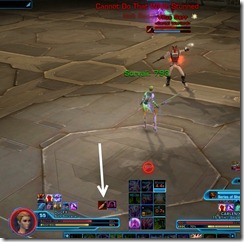 This fight is mostly about knockbacks so make sure your raid has plenty of knockbacks, stuns and slows. Mercenaries/Snipers and their Republic equivalent are good for this fight due to their 360 AoE knockback. Be sure to have high accuracy so you don’t get resisted. You can also purchase slow and stun grenades produced by Cybertech (useable for everyone) to aid in this. 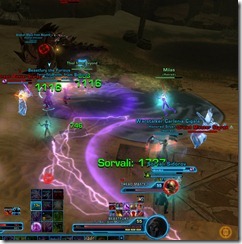 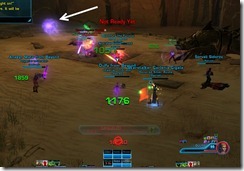 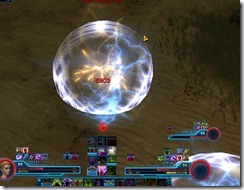 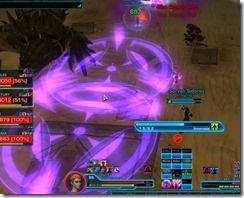 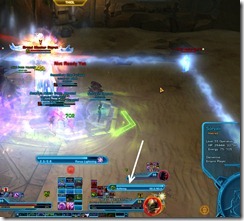 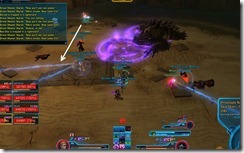 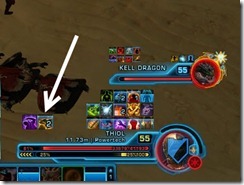 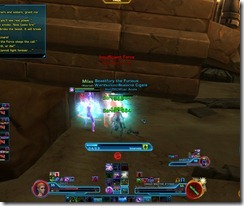 If you leave a melee droid til last you can simply ignore it and enter the next phase without it able to attack you. Just deal with the Assualt and artillery you are removing first 🙂

Mount from S&V NiM last boss. Has a buff called “Blinking Red Button” becomes active between 1 and 2 mins after using the mount. If you right click Titan will speak with a 25% chance of launching missiles. The missiles seem to always land on you regardless of what is targeted.

cool ty for info and grats on the mount 😀

Video of the mount, not great quality as we were just stuffing around, but you get the idea.
http://www.youtube.com/watch?feature=player_embedded&v=RyvvcBnXKkI

So now, in your view, after the deployment of S&V NiM. Which will be the ‘easiest’ order to kill Asation-S&V NiM bosses overall for guilds with limited skills that need to optimize their progress and gear farming? Feedback will be much appreciated from everyone facing NiMs.

Withering Terror -> Dash’roode -> Titan 6. Do you plan to skip bosses? If so then Operations Chief -> Olok -> Operator IX – Kephess.

Does the new mount drop from DMS or Titan?

If you don’t mind if I ask what’s the title for clearing this?

Dragonslayer if you clear it under 2 hrs.

You guys are awesome

I’m sure you hear this a lot, but thank you for all the effort you put into these guides. They really make a difference for us less than hardcore GMs out there trying to get our guild to see (and clear) this high level content.

You are very welcome 😀

If you leave Tu’chuk as last he cannot be damaged until you kill all the adds.

Did you try killing Sunder or Garr third? Is it the same thing: immunity to damage until adds are down?

Not sure what happens, it is a difficult fight and killing Sunder & Garr at the same time is the safest option.

Do we have a more definitive answer for how the 2nd big grenade works yet, we got it on our ranges dps so often even if we did things to keep tanks at top aggro and tried proximity stuff that didnt help either.

Yeah my guild has started to seriously progress on S&V and TFB and we have tested the two highest threat (tanks in torparse/mox) and its definitely not two highest. We think its just completely random on the second person but the main tank always get the other one. other then that idk what else it could be lol

Thanks a lot for all these valuables informations. We are still missing something with Dash’roode “lost” mecanism … usually some of our raiders are getting lost 2 times in a row, so they can’t use a 2nd PSG and get killed by debuff stacks. Maybe there is something with vanish abilities (it happened a lot with our operative healer or our assassin tank). Is there any way to control who will get lost during the moving shield phase ? Thx.

Yes, DO NOT vanish at all on this fight. If you vanish after getting the first lost, you will get it a second time most liikely.

Hey will you put a picture with the Titan mount in the nearest future ? 🙂

Hey Dulfy, with the patch of today I think you need to update your guide about the cartel warlords as you won’t be able to kill 2 at the same time anymore.

With the changes to the Warlord what do you think is the best kill order since you can no longer kill 2 at the same time?

We do Horic -> Tu’Chuk -> Sunder -> Vilus Garr, on phase 4 just don’t break Vilus’s stun on a dps unless they are about to die.Have them use survival cooldowns and healer heal through them as much as they can. If a DPS break out the stun, Vilus will just go stun someone else instead which could be healers/tank.

with the change we do it by killing Horic first then the other three all at the same time to avoid the guy on his own. it requires a bit of timing and some careful dps at the end but they can be downed together

Do you have anything on the Hateful entity?

Wanted to know, how i can get dread masters mask from that operation?

Kill the secret boss, Hateful Entity or something. Can be spawned by triggering the secret boss in NiM TFB which is triggered by an item obtained from Dreadtooth in Section X

Random question: do you get the buff that reduces cleanse cooldowns on the cartel warlords fight? Otherwise we’re gonna have to have both healers focusing the tu’chuk tank.

With level 60s in 192+ gear, how quickly can you kill the big add that spawns during the chained manifestation phase?

Do soft CCs such as whirlwind, concussion missile work on the chain phase for DMS? What about flash bang?

They all work I believe.

Would the concussion missile stun DMS for the full 60 seconds? If so it would seem this method should be used every time. I would appreciate a response based on experience with that specific CC on this boss and not just a speculation.

I know it’s asking a lot but I just want to know beforehand for proper planning.

No, it doesn’t work, if you check the manifestations debuffs, it tells you “immune to controling effects that break on damage”, so, no CC, only stuns and root.

Is anyone else having problems with the Nightmares from Styrak causing fall damage and kill players? Our last run it happened 3 times. Also is the bridge boss supposed to be invisible?