Notes and transcripts for the GW2 Pax Anniversary Bash coverage occuring from 1:30 to 4:30 PM PDT. 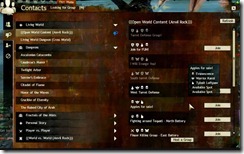 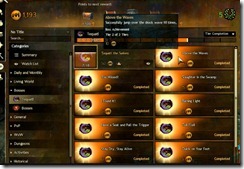 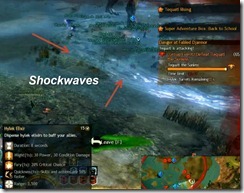 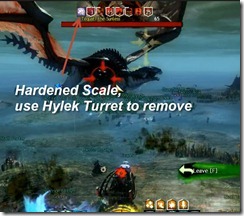 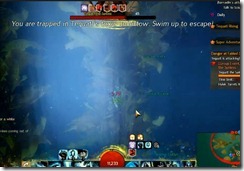 It is probably a permanent thingie rather than 2 weeks. You are not going to revamp a world boss for 2 weeks and have it go back to its original state heh

The SAB will also be available

with all old and new achievements, yay! 😀

Yeah. Kudos to the site that’s offered us such amazing functionality for a year, but with an in-game tool now available, I think it’ll become completely deserted.

Will we have more info ? other annoucement ? Decon carter said, huge revelation about WvW…

We all know a new map is coming out with some stupid point capping features, but that’s about it. The only “revelation” I can think of is if they decide to separate skills in PvE, PvP, and WvW.

That’s…. it? It’s literally nothing of value. Gee, thanks ArenaNet.

Not done yet, they are sorta taking a break with players playing the new Tequatl so nothing to write about until later.

Man, I sure hope they won’t stop with this at Tequati. World bosses need the love after a year.

Thank for the info as always Dulfy

Low pop servers and morning players will probably have to wait till weekends or stay up late just to get a chance.

Meanwhile during the peak hours, think of those queues or overflow servers. 🙁

Did you not just play the Clockwork Chaos content? If rewards are good and there’s a notification for it, players flock in the masses. I’d say the bigger problem will be getting in before the map is full.

Well I think they didn’t reveal most of the stuff just the main part. I hope so at least. Thanks for you information Dulfy, as always. I hope some better and bigger things will be announced, such as new ways to get ascended, maybe even scavenger hunt for them 🙂

Wow Dulfy! You’ve got some skills on the keyboard, good job putting this out so soon! 🙂

A LFG tool makes me the most happy Charr ever.

“GW1 had pretty regular releases so we had a system build for that but
just not at the two week release rate.”

Yeah, and we all liked GW1 better in that regard.

Also, I don’t know about anyone else, but I want to go back to killing Elder Dragons with [2] instead of dealing with all this living story crap.

you know GW1 was in some way for hardcore fanbase.

they cant just release something and 3 months later come up with something new.

GW2 is fun but without constant updates its going to fall. so living story is the perfect way to go.

i kinda dislike it too because i have to rush it sometimes but still its an okay way.

I want to see a new dragon.

“Also sleep – jumps (??).” Sleep Jump was a bug from the beta. You were able to Jump while sleeping.
Example: https://www.youtube.com/watch?v=MMtDK-sKs2U

People were doing huge sleep Jump Parties in LA. Couldn’t find any vid of that though

I know by looking the screenshot that Tequatl Rising is in the Bosses tab, but will it an endless content or is part of the living world and remains for 15 days or 1 month ?
Thank you!

Endless… the boss is already in the game.

“Need more than 80 players who are over L65+ and well geared”, really? My past encounters with world boss looked like this…. constant slideshow…. taking into account that they added achievements which require skill i doubt that I will get those or other people who also had drop in fps at worls bosses

Yet an other boring zerg fest, Zerg Wars 2 ftw. Srsly why on Earth would they prioritize revamping a world boss over more meaningful content.

While I like some of the changes for Tequatl, but some of the added changes are just stupid. 80+ players? Time limit where he flies away? 1 minute to return from a waypoint?… I don’t mind them making changes but seriously use the KISS principal! Keep it simple stupid!

These are just measures being made so people can’t simply zerg the boss; taking from any sort of challenge. Tequatl is supposed to be a grand and epic fight, and if it scaled down to too few people it would lack mechanics that would make it feel meaningful, thus requiring 80+. The time limit is such that the event CAN fail, you can’t just take your precious little time and whittle it down slowly until you get a guaranteed, non-accomplished victory. Finally, the waypoint distance is so there is an actual punishment for death, yet again going against the total zerg mentality. All of this together will require people to work together and perhaps even better the community because of it.

The requirement for some skill and effort may very well make this fight actually interesting beyond simply, “oh look, free loot. Let me just stand here auto-attacking for a minute…”.

I agree with the 1 minute to return. Contested waypoints are the worst idea ever! When I get defeated, my personal demoralization is punishment enough. All I know is I’m just going to lie there dead like a douche until someone rezzes me. And there will be a whole lot of dead bodies that won’t waypoint.

IMHO, a better scaling mechanic to deal with zergs is to unlock additional objectives/targets that have to be achieved AT THE SAME TIME. This forces larger zergs into more manageable groups. This mechanic already exists (somewhat) in certain boss fights where you need to kill the targets at roughly the same time.

PS: Tequatl wasn’t the most boring of the Chest Boss fights. Fire Shaman, Golem and Jormaga are far worse. And what about making MegaDestroyer actually worth doing?

ANet has said they’re looking at the Dragon fights first to make them more memorable, but here’s hoping that the other World Bosses will get similar revamps. (Even ones in low-level zones. I’m wary of making things like the Fire Elemental as hard as it used to be, but there’s nothing very memorable about showing up to a huge zerg that just pounds the Maw Shaman until he dies, and you can’t even see him most of the time in the huge cloud of SFX.)

Speaking of which, can I get a better Effects filter? The Goggles they gave us, they do NOTHING!

yo the fire elemental was the most thrilling thing in the beta. it took the entire map to finish! XD and i loved it

No one asked why Rox is the only cute female Charr. She’s the only Charr with enlarged eyes and tons of facial plastic surgery. The female Charr we’re allowed to make are hideous.

This event will be toned down , this wont be a zerg farm , it will require alot of coordination as it looks nobody will complete it.

Dulfy, do you happen to know if the Tequatl Rising release is going to be permanent content? That is, the rewards and achievements will remain completable even after the two week period is up? I’m presuming it would be, since it would rather silly of it to revert back to its old form, but I’ve been surprised in the past too with the removal of the Aetherized Shoulder rewards from the Not So Secret JP after Sky Pirates was over.

“We had the idea of Living World before the game even came out. Dynamic events was the first step, Living World was the next step.”

Then they screwed up. Right now Living World is overwriting Dynamic Events instead of synergizing with each other.