A review of the Razer Naga 2014 MMO gaming mouse with a focus on the MMO gamer.

Razer, a well known company focused on gaming systems and peripherals, has recently released the newest edition of their Razer Naga mouse. The 2014 edition features mechanical buttons, tilt-click scroll wheel, and an in-game MMO configurator for setting up keybinds on the fly. Razer contacted me recently to give their newest mouse a spin and here is my review on it after a two week usage period. 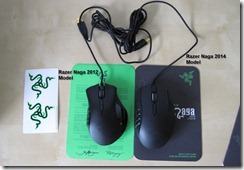 The Razer Naga 2014 mouse comes in this neat little box. Once opened, you can find a bunch of manuals that come as standard with all Razer products. 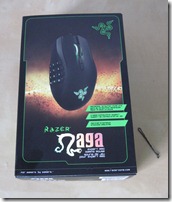 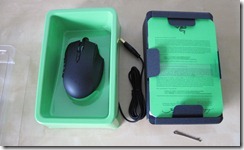 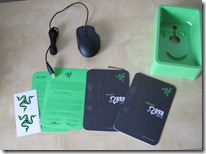 Here is a close up of the mouse itself. 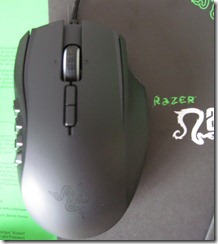 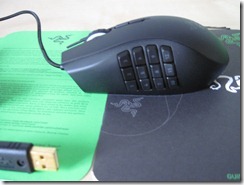 If you have never used a Razer Naga or similar mouse before, this is for you. Razer Naga mouse is becoming a fairly common staple among MMO gamers. It is so popular that Logitech released a similar mouse (Logitech G600) to compete with Razer. The reason for its popularity is the thumb grid on the side of the mouse, which allow gamers to keybind abilities to those 12 buttons and free up some of the valuable space on their keyboard. In addition, gamers are able to use the keyboard simultaneously for movement without having to move their hands off the WSAD keys to press abilities as their right hand can fire off abilities from the thumb grid.

The thumb grid can take a few days or weeks to get adjusted. Once you get adjusted though, you will never want to go back.

How is the 2014 edition different from my old Naga?

There are a couple of neat features in the 2014 edition that may make it worth your while to upgrade.

Mechanical Thumb Grid with adjustments: Mechanical buttons are getting more popular with gamers due their responsiveness. Compared to membrane based buttons, they feel less “mushy” and provide better tactile feedback. Keep in mind that the mechanical buttons featured here are not the same type of switches found on your mechanical keyboards (i.e. not Cherry MX switches for those that are more technology inclined). They do make a bit more noise but it is no where as loud as a mechanical keyboard.

In addition to the mechanical thumb grid, there are also slight modifications to the thumb grid that raised the buttons on the outer ring slightly more. This guide and rests your thumb directly on the 5 and 8 buttons. For new users, this makes the thumb grid easier to master and for veterans it ensures less misclicks. 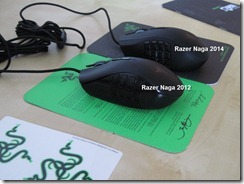 One size fits all: Razer 2012 edition came with several side plates designed to fit different hands. This is no longer necessary with the new model, which is designed to fit all hands. I have fairly small hands and the mouse fit fairly well. If you are skeptical, you can always try it in a computer store before purchase. In terms of weight, it is slightly heavier than the 2012 model but it is not something easily noticed. 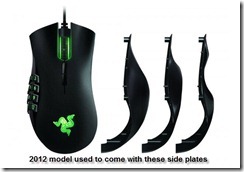 Anti-Sweat coating: The new coating is a bit more coarse and less slippery compared to the old Naga models. If you hands sweat a lot, the new coating is designed to combat it so you don’t slip your hands on mouse. The texture may feels a bit weird at first if you are used to the older Naga models but it feels pretty normal after a few hours of usage.

The Razer Naga 2014 edition has a similar design and appearance to the Logitech G600. It is slightly smaller and lacks the G-Shift button that can turn the 12 button thumb grid into 24 buttons. The curvature on the thumb grid is also slightly different with the G600 having raised 5/8 buttons (G13/G16) instead of the flat buttons that Razer has. I personally do prefer the thumb grid design on the Razer and find the G-shift button more prone to misclicks. Priced similarity at $80, it comes down to if you prefer mechanical buttons on the Naga or the extra G-shirt button on the G600. If you are left handed, your only option is the Razer Naga 2014 mouse as the G600 does not have a left hand model.

One minor thing against Razer is that you cannot customize the lighting on the Razer mouse as it comes with green backlit only. The Logitech G600 thumb grid can be customized with different colored backlights.

The 2014 model comes with an ingame MMO configurator, which is a small software interface that allow you to quickly adjust your keybinds in-game without having to bring up the Razer software menu. Only a few MMOs are supported at the moment (GW2 is supported but not SWTOR). However, Razer is constantly adding more compatible games to the list and the configurator even works on currently non-supported games like Battlefield 3 or Borderlands 2.

If your game is supported, you will see this tooltip pop up when you launch the game. Pressing the specific button combination will bring up this screen where you can quickly adjust your keybinds and macros. This can be done while you are full screen in-game without having to tab out.

If you are in windowed mode, the little tooltip pop up can be annoying and bugs out once in a while. Luckily can you turn it off in the Razer Synapse software under Addon. 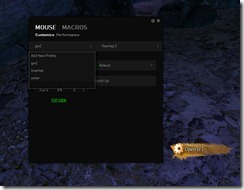 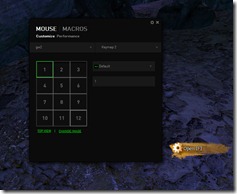 In addition to the Ingame MMO configurator, the mouse also comes with the standard Razer Synapse software. It allow you to make keybinds, macros, turn lighting on/off, and do calibration/adjust sensitivity. The Synapse software does have fairly frequent updates since it is an all in one software for all Razer products so that may get a bit annoying.

One of the best MMO gaming mouse on the market just received some cool new features that makes it even better. The ingame configuator does not support all games and the Synapse software can be annoying but overall it is a very solid mouse that can make a good present for the holidays.

Special thanks to Razer for their support and providing me with a review unit!