A preview of the GW2 Super Adventure Box Back to School patch coming in later today. Artwork is drawn by Iske, my amazing artist friend.

September is here and Tyrians are heading back to school with the Super Adventure Box! In addition to a completed World 2 and a sneak peak at World 3, players can expect a new Tribulation mode for World 1 and World 2 that is sure to bring frustration and pain.

To prevent the mindless grinding and farming that happened last time, Arenanet have changed all the chest loot and dig spots to account bound daily. This make it a bit harder to get the good stuff.

If you did not get a chance to grab the SAB weapons last time, they unfortunately will not be returning. Instead, players can purchase the 9 weapons left out last time for the same price of 50 Bauble Baubles and a gold. (Mace, Axe, Warhorn, Focus, Torch, Pistol, Rifle, Dagger, Hammer)

Players who had a chance to play in the sneak peak for World 2 Zone 1 will recall the rapids, the narrow bridges, and the assassins sent to hunt you down. You will need to revisit zone 1 again for the new set of achievements that have you again finding hidden rooms and gathering all the baubles. 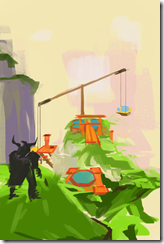 In the limited preview we had, World 2 zone 2 was shown. Zone 2 is a mountainous area with a distinctive Asian theme that have neat little dojos and palaces on top of mountains and cliffs. This zone is a lot more open world and exploratory compared to other zones with quite a lot of different paths you can take. Generally, the harder the path, the better the rewards. Baubles are also a bit harder a come by with most of them well off the main path. Don’t let the peaceful appearance deceive you as this zone is populated with all sorts of nasty creatures. There are ninjas shooting stars, frogs that swallow you, and stealth owls that steal your hard earned baubles. 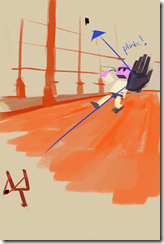 That is only half the challenge as you will soon learn that your surrounding environment is just as deadly. There are dart traps that on various doors and passages that will one shot you. One wrong step and your chest is pumped full of darts. You will learn to recognize these traps quickly and find detours that allow you skip past these traps. In addition to the traps, there are various puzzles that challenge your brain. One puzzle, pictured here, will have you try to find a way to tip the massive scale so you can hop on to the next checkpoint.

It wouldn’t be a dojo without a master. You will soon encounter a dojo master mini boss that will teach you the art of dodging and reflects. This mini boss pays homage to Megaman and defeating him which give you a giant Glove of Wisdom which allow you to push various stationary stone blocks to act as a mobile platform or break apart wooden barriers blocking doorways like a Kung Fu master.

Armed with the giant glove, you will need to make you way past another puzzle that pays homage to push block puzzles that you may have played ages ago. You will need to push the various stone blocks in place with your glove while avoiding the deadly dart traps. One wrong push and you are good as dead. 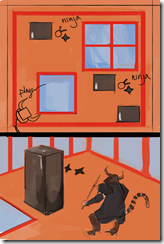 If none of these truly excite you, how about rolling a gong from top of a temple to the bottom while using it to block dart traps? This pays homage Chinese nightclub scene in Indiana Jones and the Temple of Doom movie where Indiana Jones must roll a big gong to avoid enemy machine gun fire.

Keep an eye out for a secret shop that sells a Wooden Whistle for 250 baubles. It can various songs from the SAB.

For those who find things like the clocktower jumping puzzle easy, Tribulation mode is for you. This is an extremely time consuming and difficult content designed for only a small group of players who truly want a challenge. If you think world 2 is bad with all the dart traps, that is nothing compared to Tribulation mode.

In Tribulation mode, everything can and will kill you in one hit. Harmless flowers will explode, rocks will suddenly jump up and smash you, and even checkpoints are not safe. Take one wrong step and you will fall into an invisible ditch or mine field. Obvious and easy routes are often blocked by No Clouds, forcing you to take a longer and more dangerous path. Players will die a lot and will need to spend time farming baubles so they can buy more continue coins to continue their addiction. 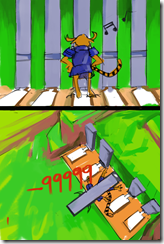 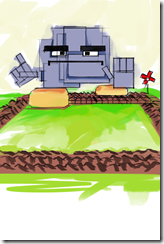 Luckily, there are more checkpoints in Tribulation mode compared to normal mode. This will at least take some of the frustration out and allow you to experiment abit. Tribulation mode exists for world 1& 2 and is available for solo or group of players but it might be better to do this solo unless you want to lose some friends. All players must reach a checkpoint to activate it so there is no riding the coat tails of other players for the baddies among us.

Much like World 1, World 2 also have achievements that have you finding all the secret rooms and find all the baubles. Complete 13 of the World 2 achievements and you can earn yourself a new title (Honor in Applied Jumping) along with a new backpiece (Storm Wizards’s Backpack Cover).

Tribulation mode also have its own separate set of achievements but doesn’t seem to offer any titles or rewards beyond the special weapon skins and the numerous achievement points.

My exhilaration at SAB’s imminent return is tempered by the disappointment that the original Super skins won’t be returning. 🙁 I already have the ones I wanted, but I think it’s a poor move that the old skins can’t be obtained by new players who’ve joined since then. (Yes, yes, I know they can still get it from the TP, but you can expect prices to shoot up once news of this gets out.)

They are available after you completed the tribulation mode. 🙂 read above

Different color variants though, you won’t be able to get the original blue ones except for the 9 new weapons

Do you mean the colour of the weapon itself or just the icon name?

Color of the actual weapon, the normal mode weapons have a blue tint if you havn’t noticed already.

True. But the new colors sounds fantastic. The blue ones are already getting abit old imo 🙂

The old skins ARE available.

They stated upon the initial release of SAB in April that the skins wouldn’t be returning.

Not really. We knew they weren’t returning (ANet said so long ago). Prices for them were at their highest shortly before SAB went away the first time (~80g for the Greatsword).

[…] is nothing that I can write that can compare with some other sites’ fundamental previews of today’s Super Adventure Box update for Guild Wars 2; so I want to head in another direction: […]

This may be a silly question (don’t remember much of SAB), but if they made chest loot and digging rewards daily account based… how is one supposed to farm for baubles to do tribulation mode?

I don’t get ANet design sometimes… In one breath it says “to remove the mindless farming” from last time, then goes on to say “yea, you need to farm”

If I remember right, you got continue tokens around the world doing stuff like jumping puzzles. I don’t remember if they appeared as random drops though.

There is an infinite continue coin you can purchase from the gemstore, that may help.

Does this count for ALL chests? Or just the boss chests? Is there now a limit of how many baubels I can get daily?

it counts for whenever you die, its infinite lives.

Is this only available for 2 weeks or is it making a permanent return this time?

My body is ready. For Honor in Applied Jumping!

Hi Dulfy, great guide. The one correction is that World 3 will give a red variant of the skin and World 4 will give purple. 🙂

Tribulation mode can kiss my ass. I’m not even gonna try.

dude, i just finished zone1 tribulation. its worth it bro.

what should i do on storm wizard at world 2 zone 3 boss(final boss i guess). he blocks all of my attacks.

how to beat storm wizzard at w2z3?

finally got to world 3, if you translate what the genie says, he makes some very interesting comments and sends you to a secret lab in rata sum. the password is on front of the rock the genie is standing on. The two achievements for these are: super adventure secret and special instruction.

Here is the genie translation. Some of the words seemed to be incomplete as they were only one letter, so i extrapolated the most likely word. Anyway, more then enough info to help people find the location:

I’m the genie of the box
you’ve beaten many dangers,
you should be rewarded

find the hidden code on the
rock. with the code seek out
the secret entrance

you can find the lab near
research waypoint. in the depths
of Rata Sum.

hi every one, in world 2 zone 3, there’s an iced waterfall, how to destroy it? i have to buy the torch with 400 bubbles?

yes! u need to buy the torch..

all right, thx very much!

No guide for super ad box ? Or achievements ….

Just playing world 2 this time around and my secret rooms are empty? Anyone else having this problem or know what to do?

yeah, they lied. when they were doing the live coverage, someone asked them if the secret rooms and baubbles would be in the same place as the first patch. he said that they would be though a lot of those secret baubble places were completely empty.