A guide to defeating Nefra, Who Bars the Way, in Dread Fortress, one of the two new operations introduced with Patch 2.4. Nefra is the first boss players will encounter in this operation.

Identical mechanics to hardmode, the green DoT (Voice of the Masters) deals significantly less damage (325 per tick instead of over 2k damage per tick)

1. Two tanks will need to stand together in front of Nefra to share and split the cleave damage from his Double Strike attack (which can obliterate a tank otherwise). If one of the tanks go down, a DPS (melee preferred with some survival cooldowns) will need to stand in their place until the tank can be resurrected. It is suggested that you tank Nefra by one of the pillars and have the raid scattered around Nefra’s back. 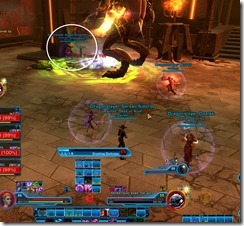 2. Green Dots will go out periodically to the entire raid. DPS who can cleanse themselves should do so to allow healers to focus on other DPS/tanks. Due to the cooldown on cleanses, you will want to assign cleanse targets for each healer so there is no wasting of cleanses. This DoT is called Voice of the Masters (internal damage) and will tick for 2k damage per second until it is cleansed. 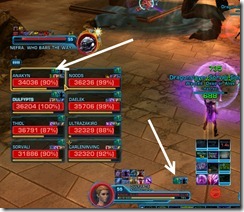 3. Overloaded Assault Droid will run into a random raid member periodically and attempt to explode (explosion area is covered by the big red circle). Players who fail to move out of the circle will likely be killed. Tanks will need to pay attention and not fall asleep during this fight as these droids can run to the tanks and explode. 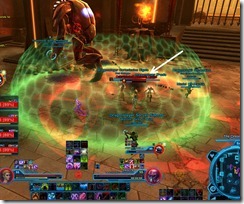 How often does that DoT go out? Is it too often for an agent to remove it from themselves with Evasion?

DoTs seem to go out about every 30-40 seconds

30 seconds and you can remove it every other time. leave reactive shield for when evasion on CD

I think it’s almost exactly 30s, because on my assassin tank, if I Force Shroud the first one, I can’t get the second one, but it’s JUST off cooldown for the third.

I’m a bit worried if those are all the HM mechanics what will be left in SM, great guides as always!

same mechanics, and the two people the boss focuses on (the ones that are splitting the damage from Double Strike) get a circle under their feet

The dot that you’ve mentioned, is it force or tech ?

I THINK it’s phyiscal. Sorcs, Operatives and Mercs can all cleanse it.

We killed this tonight, and instead of an Implant we got an Unassembled Dread Forged Belt drop. Did anyone else get other drops than Implant or just us? 😮

We got the belt as well, although our second raid did get an implant.

Shame for tanks… the itemization on Oriconian implants is terribad. We’ve dropped it once so far, and it was a belt for us. Was really really hoping for the implant, selfishly, since I am in the #1 spot in my raid team’s suicide list.

we had to 3 heal it due to lack of self cleansing classes. DOT is applied every 30 seconds and as as gunslinger i was able to cleans it every other time.
with 3 dps there was no problem healing thru or dispelling and boss went down really quick.
I would suggest 3 healing as it makes the fight really really easy. get tanks always move to one side then go back in their original spot if targeted by explosion and its easier then WH in TFB in HM. We are not full 72s (but close to it).

Ran this on SM today. Not sure about the green dots, but the other mechanics seemed to be in place. Overall it was a stupidly easy fight, though, even for SM. Killed it before my Boundless Ages relic came back off cooldown, lol.

When we tried it in HM our tanks got hit for like 80-120k during double strike. Do they have to stand in one line, or can one stand a little bit in front of the other one?

they need to stay together and close to each other. If a tank get hits for 80k+ that means other tank was too afar away. They have to coordinate when they need to avoid explosion. Our tanks decided to always move left and once explosion was over, moved back to original spot.

We had our 4th dps, a Merc, aggroing the droids with damage and pulling them out of the group to detonate. This let our other 3 dps, 2 healers and tanks all be able to stay stationary for Sorc pools to hit everyone. Still difficult, but cut out the movement.

Anyone having issues with heals, we had one of our dps sorcs go heal/lightning hybrid. We had no issues at all with DPS, and it really helped healing.

does the Jedi Shadow’s Resilience remove the DoT?

enrage timer is 6 minutes on HM, so if you want to update it dulfy now you know

So we cleared Nightmare 8 Nefra last night. Not too different from the Hard Mode mechanics except for having to pull the entire raid over to eat that move after he cleaves the tanks. He’ll have a running stack which will trigger the mechanic at 15. It’s a frontal cone attack, so around 14, bring your dps/healers near the boss. At 15, tanks eat the cleave, then turn the boss to the raid so the entire raid can mitigate the attack. After that, tanks turn the boss away from the raid. The dot still goes out and the bomb guys still spawn.

yeah I found the enrage when we 5 manned it