A guide to defeating Corruptor Zero, the fourth boss in Dread Fortress, one of the two new operations introduced with Patch 2.4.

Identical mechanics to hardmode except there is no tank swap, no Concussion Mine and the Unified Beam doesn’t really one shot you unless you are low in HP. 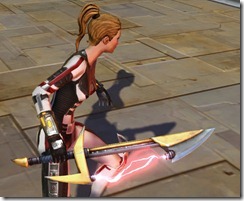 Tanks will be receiving a stacking debuff from the boss that increase the boss’s damage dealt to them so they will need to swap after 4-6 stacks. Swap at lower stacks if your tanks can’t handle the damage. 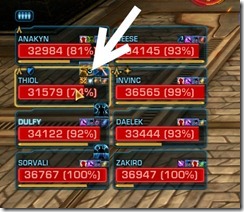 This is a new mechanic introduced to hardmode on live and it is something you have to beware as it can potentially wipe your raid if not handled properly. At a random time during the fight, one random raid member will get a debuff icon shaped like a mine. This debuff keeps stacking up and deals increasing AoE damage to the player and anyone around him. You will see him casting it but you can also tell if this debuff is is on your via your debuff icon or if you see a sphere keeps exploding over your character. When you receive this debuff, you will need to run next to the boss and damage him with this AoE attack to remove it. 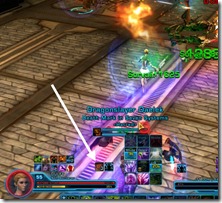 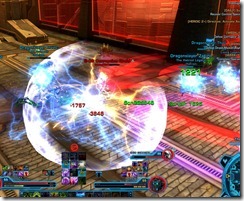 Before you get to fight Corruptor Zero, you will need to face a large group of adds. The two adds to note are the D-03 Repair Droid which heals other adds and the D-15 Corruption Droid which drops a red circle on a random member and casts Missile Salvo on that player. Whoever receives that red circle needs to stay away from other players to prevent collateral damage. Missile Salvo hits for about 8k damage. Offtank will need to grab the adds and tank them. 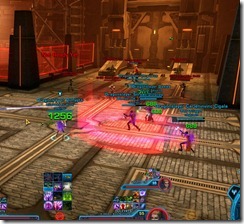 When Corruptor Zero is in melee mode, he will use the Massive Slam and Heavy Slash abilities. All of the droid adds that he spawns will be ranged.

Corruptor Zero himself have a PBAOE (Proximity based AoE) attack in melee mode called Massive Slam that deals around ~4k damage per slam. The cast time on it is only 0.5s but as long you stay a bit of distance away from him the attack isn’t something to worry about. 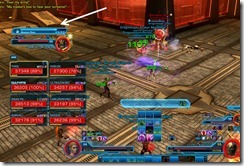 Healers and Tanks need to be aware of a channeled attack from Corruptor Zero called Heavy Slash. This is 3.5s channel that does a ton of damage to the targeted tank so be sure to pop defensive CDs if you see this attack coming up. It leaves a Bleed DoT (physical) that can be cleansed by operatives/scoundrels and commandos/mercs. 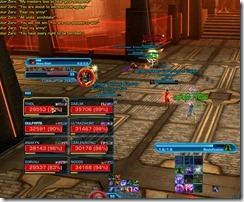 When Corruptor Zero is in ranged mode, he will used the Anti-Gravity Field, Chest Laser, and Missile Barrage attacks exclusively. All of the droid adds he spawn will be melee.

Anti-Gravity Field is a large red circle around Corruptor Zero that tanks and melee DPS need to get out of ASAP. This red circle not only lifts those who fail to get out (stun breakers does not appear to work here), it also cause aggro drop which can be a serious issue for tanks caught in the circle. Tank swap here if the main tank is caught inside the circle. 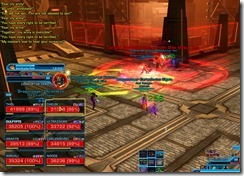 Chest Laser is the equivalent of Heavy Slash in melee mode, it is a channeled attack that applies a DoT at the end (tech) which should be cleansed. Normally this attack is reserved for tanks but if the tanks fail to get out of Anti-Gravity Field, Corruptor Zero will switch to the next highest threat and this attack can kill a DPS/healer easily. 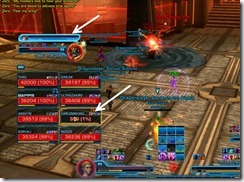 Missile Barrage is the equivalent of Massive Slam in melee mode but this is a raidwide AoE centered on every raid member instead of a PBAOE. You will need to spread out to prevent overlapping damage (it is like the Titan 6 fight). This is not a channeled attack but rather there is a slight delay between the cast and the arrival of missiles so he can use other attacks while missiles are homing down your raid. 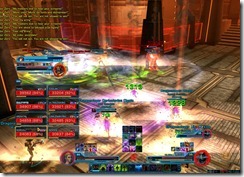 Corruptor Zero goes into this mode shortly after hitting the 20-30% mark. He will randomly teleport to a section of the room (the room is shaped like a cross) and shoot his giant lasers. Anyone caught in the path of the laser will be instant-killed (even if you stand on the sides, the laser will still kill you). The trick to avoiding the laser is to 1) Mark Corruptor Zero so you know where he is and 2) Run to a corner and stand in the section of the cross that is diagonal to the beam (a simpler way to put this is don’t be in line of sight of the beam).

Where he lands for the first time is random but after that he switches to the opposite half the cross so as long you are standing in the section where he was standing with the previous beam you won’t die to the beam. 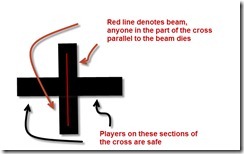 Dropped [Corruptor Blade] for us today on HM Dread Fortress:

Got it aswell! Looks really cool and from what I know first legacy mainhand.

Thanks, this is a vibrosword right? For some reason your pics came out really small 🙁

We noticed another mechanic in 8-man HM today. Sometime at 40% HP, a random player will receive a stackable debuff called Concussion Mine, that does AOE damage to all surrounding players. The player with this debuff has to run into the boss immediately. As soon as the boss is damaged by the debuff, the debuff will be removed. Alternatively, Scoundrels can remove the debuff by going into stealth. If you don’t do this, the damage dealt by the debuff will become unhealable sometime around 12 stacks, and when the player dies and receives a battle-rezz, he will lose the debuff as well.

You can get it at any %, it is random through the fight

It started for us on 21%, as well as on 13% and even 7%. Different every attempt, so don’t rely on percentages

Hi Dulfy, I got this mainhand legacy weapon from corrupter zero in dread fortress HM. Havn’t seen it anywhere else so might be first to post about it and though that this is the best place to post it. Tell me if you want more pics.

Cool thank you 🙂 Can you take another pic from the other side as well? It is a vibrosword right?

You can see the item tooltip in his picture, it reads “Requires Vibrosword”.

On a not-entirely-unrelated note: DO WANT! :S

PS. Maybe it’s just me, but I found that last sentence about the opposite half a bit confusing. I do get how the beam works, but I really don’t think ‘opposite’ is the word to use here: if I were on the western ‘branch’ of the cross, then the opposite half would be the eastern ‘branch’, not the line perpendicular to the one I’m on. I think the clearest explanation could be to say that if he’s in the east or west branch, go north or south (and vice versa).

I do not think Concussion Mine is Random its not % based either we got it 100% of the time during the 3rd set of adds.

We killed the guys yesterday, it took us around 10-15 wipes to achieve that and during those attempts we did received concussion mine only once. Not once per fight, but once per 15 tries. I don’t know if we were THAT lucky or is it THAT rare.

new info regarding Concussion Mine:

– it goes out more often then once per fight

I just checked logs for our 4 attempts last night and it was applied three times in 2.5 minute fight.

a) Once went to healer that boss did force leap soon after to, so after second tick it dispelled

We didn’t know about this new debuff on Live servers so this wiped us and as we only had like 20 minutes for few tries on him, i wasn’t checking logs for damage received at that time.

So if your group is melee heavy, heave your healers close to boss and you got lucky with RNG it is possible not to see this debuff once during whole fight as its is applied and then dispelled within a second:

yea tonight we got concussion mine every wave !

another annoying thing is his red circle stun skill – we have tank and dps run away from it only to ne pulled back and stunned. You can see it here:

Really annoying and causing few wipes just from tank getting stunned then killed from it even though he swears he is outside of his red circle.

with the concussion mine, we’ve had a couple of people have the mine debuff at the same time but not the damaging stacking one, does one of the adds activate that with an ability?

It is a bug introduced with the latest patch, you can ignore the non-stacking one as it does no damage. Just deal with the stacking one.

Any tipps on the current version of the fight? I wonder why nobody is discussing it here… Thanky in advance

Mostly because this is the 3rd time they trying to fix it and it bugged it in the process. You will have some people die during the unified beam phase to the mine. Just ignore your losses, rez if you can and push on.

The mine seems to be thrown out to farthest away from raid and also we get 2 mines between waves of adds.

Are you sure the Bleed DoT left by Heavy Slash is Physical ? You add that’s it must be cleansed by a Op/Merc. As far as I know Tech is the only DoT type that sorcerer healers can’t cleanse, as they have a talent to cleanse Physical as well as Force and Mental

What gear do you have on in the picture of the Corrupter Blade?

Has anyone else noticed if a side effect of the Anti-Gravity Field is that he attacks with one knockback anyone caught inside? Our maintank would keep aggro, not get caught, but he would still attack others that were caught.

Tip if you are having the same problem getting out of the red as I am- I’m an east coaster on a west coast server, so where I think I am and where the game thinks I am are often quite far apart- if you jump, that makes the server update your position. So if you jump as you exit the circle, that will help make sure you don’t get unjustly annihilated.

Is There a timer for anti-gravity field or is it random?

Hmm I think there could be one but I never took note. Generally I keep an eye on it when he switches to the ranged buff.

Yes, there is a timer for the anti-grav field. One of the ranged dps in my group keeps track of it though and just calls it out because I’m a lazy tank. The first one drops at 30 seconds though, or some multiple of half a minute. If he’s moved/moving during the anti grav field drop the timer gets thrown off.

There is a rotation to it.. 3-1-4-1-2-3 That order will depict when his gravity vortex comes out. So he’ll do 3 concussion mines then gravity vortex then 1 so on so forth.

Does the Corrupter blade really drop in HM? AS my raid group has cleared it a few times now, and no blade.

Yes, it does. Got it myself

Does the still drop the HK-51 customization or was it removed together with the watchtower customization? (By the way does anyone know why they removed it?)

Removed, was never on live servers