A guide to defeating Grob’Thok, the third boss in Dread Fortress, one of the two new operations introduced with Patch 2.4.

Mostly identical mechanics to hardmode but Pipe Smash does very little damage, does not interrupt casts, and does not reduce Grob’thok’s damage intake so you can largely ignore it in storymode and make the fight into a pure tank and spank.

Video: Fight recorded on PTS. The key difference from live is that the Pipe Smash is a lot more frequent on live. You should let Pipe Smash finish casting and then drag him under the lift to stop it.

1. Overhead Smash is a periodic raidwide AoE attack that hits for ~8k damage (only ~2k if player is shielded). It knocks everyone into the air slightly and interrupt any casts. There is a cast timer of 3 seconds so you can see it if you have Grok’Thok as a focus target. The attack is fairly infrequent so should not put too much stress on the healers. 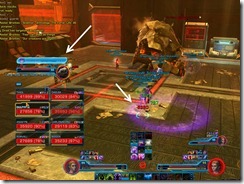 2. Roar is a conal attack that mostly affect tanks as long Grob’thok is turned away from rest of the raid. It has a 3.5s cast and Grob’Thok can turn while he is channeling the attack so tanks will need to wait until the cast is almost finished before running throguh Grob’Thok to avoid it. 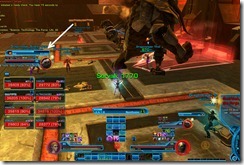 3. Pipe Smash is an attack you want try to minimize since it reduces Grob’thok’s incoming damage (by around 80% or so)  and he will keep spamming this attack until you stop him (about 7k damage per smash). The way you avoid this attack is by using the magnetic lifts on the ceiling that travels around the room. This attack doesn’t come immediately so it isn’t something you have to worry about right away. 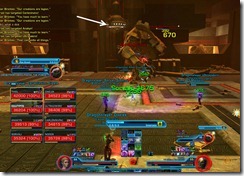 The lift always spawn on the opposite corners of the room so you have a pretty good idea of where the lift will respawn once it is destroyed.

4. From time to time, one random raid member will get targeted by the Mining Droid. This player have “lava” feet and must move around to negate the damage. Moving around will cause them to drop a trail of lava and they will get a debuff icon in addition to the red text on screen. This trail can be used to deal with the Dreadful Ugnaught adds that constantly spawn. 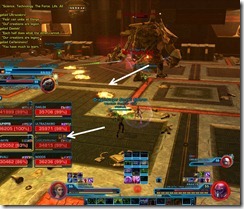 5. A group of 3 Dreadful Ugnaughts adds will constantly spawn on a timer during the fight to harass raid members. Offtank will need to grab them as they can pack a punch if they gang up on someone. They have about 25k HP each and will need to be killed as the next group spawns regardless if the previous group is killed. DPS can either drop some of their AoE abilities on them or offtank can drag them through the lava trails as they are susceptible to it. Regardless, you don’t want to waste too much DPS on them as the enrage timer on this fight is fairly tight. 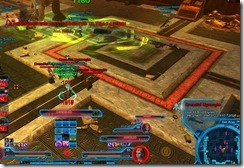 Changes on live:
1. Pipe Smash is cast much more frequently. It appears to be on a 60s timer, unlike the 90s timer shown in the video.
2. If Grob’thok is lifted in the middle of the Pipe Smash cast, he will immediately cast it after the lift ends (unlike on the PTS where it would force Pipe Smash to go on cooldown).
3. Roar does not have a stun associated with it.

We found exactly the same differences. Additionally, it appears that while using pipe smash the boss takes considerably less damage (I want to say 80% less, but I’d have to look at my logs)

Thanks, updated the guide with it.

hm enrage hit at 6:40 (give or take the one second for me to hit and check my timer) into the fight. just in case you were wanting that piece of info.

Dulfy shouldn’t you use overload to heal every chance you get since its a force free healing skill (using it away from adds or mobs)?

Has the drops on HM been fixed? I havent seen Dread Forged legs drop at all on 8 or 16 man.