A preview of the GW2 Twilight Assault patch arriving a bit later in the day, which will feature a new level 80 Aetherpath for the Twilight Arbor dungeon.

The focus of this Living World update is on the new level 80 explorable path for Twilight Arbor, which now houses Scarlet’s Aetherblade pirates. Two groups have called for the assistance of players in wiping out the newly discovered Aetherblade base: the Lionguards and Caithe. The Lionguards wants revenge for the murder of one of their councilors during the Dragon Bash festival back in June so are naturally keen on stomping the Aetherblades out.  Caithe, one of the main Sylvari characters you might have encounter in your personal story, received a direct challenge from Scarlet. Scarlet has threatened to reveal some secrets about her to the rest of the world and Caithe wants to know where Scarlet has being getting those secrets.

This new level 80 explorable path will be replacing the Forward/Up path (also referred by players as the FU path) and is a permanent addition to the game. The other two explorable paths are untouched and remains at level 55. Players who havn’t completed the FU path for their Dungeon Master achievement will need to complete this new path starting on October 1.

This new path is a combined effort from the two teams who designed Aetherblade Retreat and Molten Facility. If you enjoyed the challenges of these two Living World dungeons, you will be in for a treat. It is designed for a full party and it is fairly lengthy. You will want to bring projectile reflects as they do work against some of the puzzle elements and boss mechanics.

Much like the Tequatl rising release, there will be two separate category of achievements. One of them is the Twilight Assault meta achievement under Living World in which you will get a new backpack cover called Slickpack for completing it. You can complete this meta by either completing daily achievements or by completing achievements inside the new path. This achievement is temporary and will be gone after two weeks.

Picture of the Slickpack taken from the GW2 website.

The other category of achievements is under Dungeons and will remain permanent. There are various achievements here specific to this level 80 path. Some are rewarded for killing the various bosses inside the path while others are rewarded for various challenges or doing some optional objectives after completing the path (more on that later). Completing the meta in this category of achievements will reward you with the Mini Clockheart, which is the final boss of this particular dungeon path.

If you have watched the public developer livestream that was aired on Monday, you should be familiar with this part. This part is a homage to the other TA paths by bringing in familiar enemies such as Volatile Blossoms, Nightmare Vines, Nightmare Husks, and Nightmare pups. Fortunately, these enemies are no where as annoying as in other paths and most groups should be able to breeze through them easily. Even the Volatile Blossoms are placed more on the sides so they won’t bug you as much if you are just sticking to the main path.

This ooze puzzle is one of the first co-operative puzzles you will encounter in this dungeon. It was also featured in the developer livestream so many of you may have already seen some of it. The basic gest of the puzzle is that you will need to escort two oozes from one end of the room to the other and use them on the two gear cranks on either sides of the door simultaneously.

To spice things up, parts of the room are lit on fire and lava elementals will constantly spawn to harass your party members. The oozes are also hostile and do massive damage at melee range. However, by using pheromone plants located around the room, you can a get special pheromone buff for a short duration that attracts the oozes and forces them to follow you. (The pheromones buffs appear as special blue hearts above player’s head). 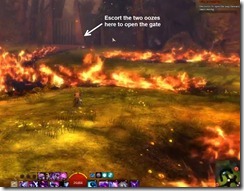 The strategy to deal with this room is splitting your party in two, with a person on each half grabbing the pheromones to attract the oozes while fending off lava elemental attacks. These lava elementals have projectile based attacks which can reflected so Guardians and Mesmers are especially handy here.

Razed Forest is the next section after the Ooze puzzle and here you will encounter the Aetherblades for the first time. The Aetherblades here are commanded by Scarlet in holographic form so they have no idea if Scarlet is actually watching them or if they are just commanded by talking holograms. Nonetheless, with Scarlet being such a loose cannon, they are extra cautious.

The Aetherblades have being tweaked to be a bit less stun heavy so players should find fighting them slightly easier. One of the new additions to their ranks is the Steam Watcher, an enemy you need to kill ASAP as he will raise alarm and summon more and more Aetherblade enemies otherwise. Make sure to call target on the Steam Watcher immediately and have rest of your group assist right away.

After passing through the Razed Forest, you will encounter the first boss encounter in this dungeon: Spark and Slick. Slick is a large norn wielding a rifle that loves to spew out black oil everywhere while Spark is a tiny asura inside a small Dredge Molten Firestorm suit that loves to burn everything. This fight is a bit similar to the last boss encounter of Molten Facility with the exception that if your group wipes after killing one of the bosses, you will have to restart completely (i.e. the boss that was killed will respawn). Also it appears that killing one of the bosses doesn’t heal the other one to full.

Image of Spark & Slick taken from the GW2 website. (Blue heart is the pheromone)

Slick will shoot out black oil pools on the ground which will place a debuff on your party that cause a constant ticking DoT. The more pools there are, the faster the DoT ticks. You can clean up these pools by attracting oozes to these pools who will clean these pools up for you. Pheromones can be acquired by using the plants around the room but Slick will sometimes fire pheromones at you as well. You will also need to pay attention to your AoE damage as accidently killing these oozes can put 10 stacks of these DoTs on your party.

Spark does a nasty Fire Lob attack which is very similar to the spinning attack performed by Old Tom in the uncategorized fractal. Some but not all of the fire projectiles can be reflected. She will also pull players in and do a nasty Fiery Overload attack. Lastly, Spark will also ignite the oil fields spewed out by Slick, restricting the amount of free space you have to move around.

The optimal strategy isn’t known yet but it seems that killing Spark first is a valid method. With Spark gone, Slick will spew out the black oil pools a bit more frequently but as long you clean up the pools with oozes your party should be okay. If Slick is killed first, Spark will do more frequent Fire Lob attacks and also activate the Hot foot ability which you may remember from the last boss of Volcanic fractal (you will need to constantly move to avoid taking damage).

Scarlet’s Factory is the next area that is unlocked when you defeat Spark and Slick. Not much of it is shown other than the Holopirate generator which will spawn explosive holographic pirates nonstop. The only way you can kill one of these generators is by kiting the pirates to the generator as the generator is immune to all damage except from explosions caused by these holopirates.

What I have shown so far is only a small area of the path, the rest of the path was not shown and you will have to find out yourself once the patch arrives.

After you have defeated the final boss, there are 5 optional objectives you can complete for achievements. Each of the objectives is soloable but there is an achievement for completing all 5 objectives in one run which would require all other party members staying behind to finish up the bonus objectives.

One of the bonus objectives contain 5 Aether Chests and if you unlock all 5 chests at the same time you get a special achievement. Each Aether chest can be unlocked with an Aetherblade key, which is obtained by combing 5 key parts you can loot from boss chests inside this path or obtained as random drops in Maguuma Jungle maps. You can get this achievement if you have 5 keys or if all 5 party members stay and have a key.

You can get a blue glowy version of the Nightmare weapons as a rare drop from doing this path. The weapons themselves are tradeable and can be brought on the TP if you are not lucky with the drops. They are actual weapons with rare/exotic stats (not Ascended unfortunately).

Sorry to be a grammar nazi, but the last paragraph under ‘Weapon skins’ you have a typo. “..and can be bought on the TP”

Just spent 30 min on slick and sparki and its easier to kill slick first to get rid of the poison and then just fight sparki, she has some high damage attacks put otherwise an easy fight

Seconded. We wiped 4 times trying to kill sparki first, but passed the bosses the second time we tried to kill slick first. Against sparki, retaliation is awesome again that Old Tom attack, so guardians with SYG and heals are fantastic.

We did it at the first time killing Sparki first (we were using T) but it’s much easier killing Slick first.

Please PLEASE Gods of Tyria, Dwayna, Balthazar, Melandru, and Grenth (Kormir gets no recognition from me, even though my ancestor practically created her), let those “secrets” be any kind of compromising material from Caithe and Faolain. Even love letters would be nice.

Is it possible to facetank Slick? I mean, does it’s possible to abuse LoS without getting toxin from him?

yes you can face tank him. we got to oakheart ( last boss ) in 2 tries. We killed Sparki first then Slick.

Just curious because the vid didn’t give any info on it how much does it pay to complete?

Slick and Sparki – our group found it very easy to kill Sparki first; full damage focus and have the tagged people lure the ooze into Slick’s oil pools… it’s completely manageable to lure the ooze around once Sparki is down. As a pug group we did it on our 2nd try after 1st try was a laugh we just rushed in trying to tank’n’spank both to see what would happen 😀

Legendary Clockheart – once again easy boss if you do it right 🙂
Everyone goes melee, watch for his Aetherized Shielding buff to come up at which point one person goes to pull a holographic mob over to clockheart – rest of group can move towards puller if they want to shorten time with shield being up. Then kill holo so he explodes on boss and removes shield. Back to tank’n’spank and dodge the super attack; jump to Clockheart’s back side when his frontal cone AoE is coming. 3-4 repetitions of this – dead…

Did spur twice (2 runs, no wipe) as this guide says and got no achievement. The boss teleported on one of the attemps, did not reset though. Anyone has more info?