A guide to Dread Master Brontes, the last boss of Dread Fortress operation. 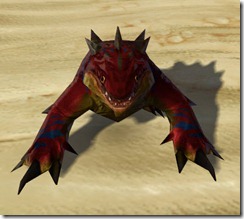 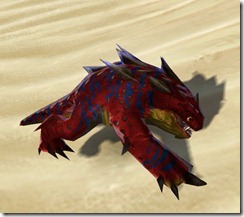 Phase 1 has three types of enemies 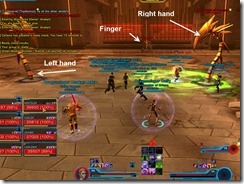 Fingers of Brontes should be killed by DPS ASAP as they can deal a lot of damage if you don’t kill them quickly (they will normally use their Pulse Beam attack which only deals ~3k damage but if you don’t kill them before their buff timer expires, they will start using Focused Beam which hits for anywhere from 5-10k per hit). They do spawn in random locations so DPS have to keep an eye out for them.

The Left and Right Hand of Brontes will need to be turned away from the raid as they have a nasty conal slam attack that can wreck the raid if not turned away. Each hand will despawn and respawn on the other side of the room if you deal a certain % of damage to it (~20%). When they despawn, they leave a debuff on the tank that was tanking them so they will need to be picked up by a different tank when they reappear (i.e. tank swap).

Different raid groups have a different ways to deal with the two hands. Some groups damage them equally so they despawn roughly at the same time and tanks can just swap when they respawn. Other raid groups focus all the DPS on one hand first and whenever this hand respawns they do a tank swap. The second method is what my raid group uses as we find it easier to manage. 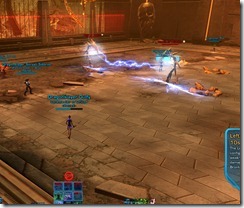 During phase 2, you get to damage Dread Master Brontes to 50%. You have to watch out for three things

Dread Master Brontes has a frontal cleave called Arcing Assault. This attack come in two versions, a 1s cast and a 4s channel that usually casted back to back. The 1s cast isn’t too worrisome but the 4s channel will place 4 stacks of debuff on the tank, which increases their damage taken from Brontes and forces a tank swap. Make sure to turn Brontes away from the raid as well or the entire raid will get cleaved and debuffed by Arcing Assault. 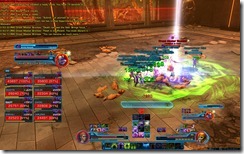 Corrupted Clones of Kephess will also spawn during this phase and they will need to be tanked by the offtank. Much like Kephess in Terror from Beyond, the clone has a conal attack called Laser Blast and will need to be faced away from the raid. In addition to the Laser Blast attack, the clone will throw out two Corrupted Nanites on random raid members which can be cleansed. 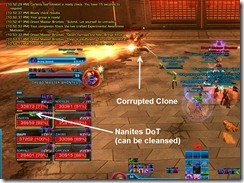 Starting at ~65%, Brontes will say “Your limitations must be explored” and Energy Spheres will appear around the room. These Energy Spheres are attached to one random player in the raid (usually a DPS). Whoever is targeted by the Energy Sphere need to run into it to explode it but you do not want to do this until the Energy Sphere has at least 15+ stacks (but under 20) of a buff. 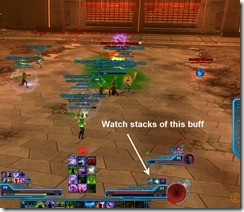 Before you reach the 50% transition and trigger it, you want to clean up the Clones and Energy Spheres as much as you can as they can make this transition difficult. Do not stand in the direction that Brontes is facing when this transition starts (she always faces the same direction) or you will die right away when her beam comes up.

Brontes’s beam will start in a clockwise fashion and if her beam touches any of the Unshielded D-09 Droids, there will be a massive explosion that wipes out your raid. Your goal is to kill the droids before her beam gets there.This is a DPS race for the most part. 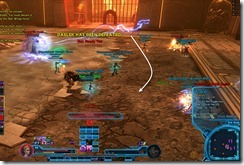 Once her beam completes a full revolution around the room, this transition ends. Healers will need to be prepared and top everyone off/bubble everyone as the next phase is very intensive for healing.

At start of Phase 3, there will be 6 Fingers of Brontes in the middle and two Hands of Brontes on the side. It is tank’s job to grab the Hands of Brontes while everyone else grab one Finger of Brontes and stand next to it. (It helps if you pre-assign everyone to a finger). You want a healer on either side so they can be in range of the tanks holding Hands of Brontes.

Spike of Pain is a purple circle place under random player. It deals ~10-12k damage if you do not move out of it. With how heretic this phase, some purple circles may go unnoticed and they can kill off players who are low on HP. It is worth mentioning them early so you know to avoid them. 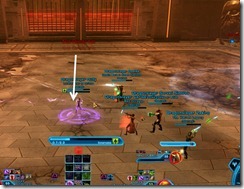 Fingers of Brontes: Everyone need to focus on one Finger at a time as these fingers will start casting Focused Beams that deals massive damage if they are not killed quick enough.  You cannot move away from the Fingers as they will start shooting someone else instead so you want to kill melee DPS’s fingers, then healer’s, and then finally ranged DPS. This order free up the melee DPS right away so they can help with other fingers and allow healers to focus on healing. 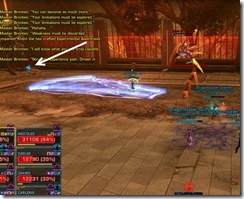 Once all the Fingers are dead, focus DPS on the Hands evenly. The Energy Spheres do not stop coming until both hands are dead and transition to phase 4 so if you despawn one hand too early (despawns at ~ 5%), you will have nothing to destroy the Energy Spheres on that side.

Phase 4 is a soft enrage phase. Both hands will spawn again with their low HP on two diagonal corners of the room. Getting each Hand to 5% spawns a shield around them, which cleanses the stacking debuff you get from Brontes. You can fight Brontes until you get 10 stacks of her debuff, then run and damage a Hand to 5% to spawn the shield. Repeat this again for the other hand when you get another 10 stacks. 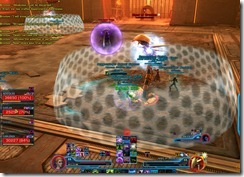 Once the hands are dead, pull Brontes to a wall and tank her there 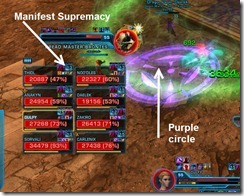 Your goal here is to kill Brontes before her stacking debuff becomes too much to handle.