1. Thundering Blast, a frontal blast that hits players for 20-25k damage. Turn boss away from raid.

2. Simplification – Three successive circles will be placed on the main tank (tank swap) and two random raid members. This circle gradually get smaller and destroy the tile the player was standing on.

3. Inferno – a red debuff placed on 3-4 random raid members after Simplification. When this debuff ends a red fire is placed on the player’s location.

4. Affliction – A green DoT placed on 2 random raid members, cannot be cleansed and ticks for 5.5k dmg every 3 seconds.

To deal with the Simplification and Inferno mechanic, our raid group starts the fight on the left side and then gradually move to the right. Tanks/melee DPS will be dropping the red circles from Simplification on the tile that Tyrans was standing or tiles nearby while the ranged DPS/healer drops them on the tiles on the sides (i.e.near entrance/back). For the fire from Inferno you just need to drop them in a place that doesn’t block other players since it only lasts for 10s. 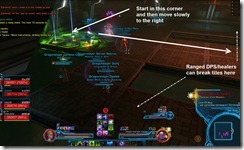 Thundering Blast is the main attack of Tyrans. You have to turn him away from the raid so that when he casts this attack, the blast doesn’t damage anyone since it is a frontal attack. What kills a lot of our DPS in the video is that the tanks let Thundering Blast hit one of the DPS, which doesn’t kill them but the affliction DoT they have on them tend to finish them off. The Thundering Blast attack can deal ~20k –25k damage to players. 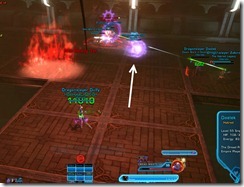 Simplification is an ability casted by Tyrans that put red circles on the main tank and two other random raid members one at a time. This circle gradually get smaller and when it reaches the smallest size it will turn the tile that the player is standing on red. This tile will soon break off and anyone standing on top of it will fall off. 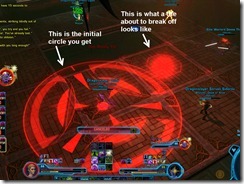 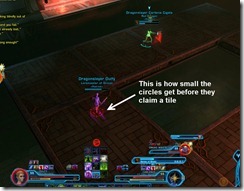 Inferno usually follows Simplification, it puts a debuff icon on four random players that will cause them to drop a red fire on their position when the debuff expires. Each debuff have a different duration so those with shorter debuffs need to becareful to not block off players with longer debuffs if they are dropping circles in the same general area. The fire from Inferno only lasts for 10 seconds. 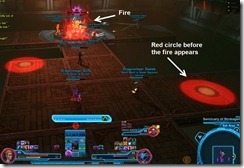 Last but not least, Tyrans will put two Affliction DoTs on random players. This DoT cannot be cleansed and ticks for ~5.5k damage every 3 seconds. The DoT itself isn’t lethal can kill someone off if they are low on health. 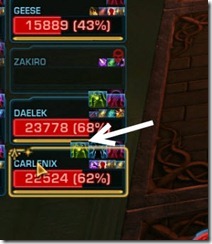 Tanks need to taunt during cast of simplification, same as breath of the masters also helps if dps take it easy During this cast as it is not a DPS race boss and there seems to be agro reset or drop at the end of every simplification cast.

Question. Are you totally sure 2 tanks are needed for this?

The maintank always get the simple red circle of Simplification so you need a second tank to take over while the maintank drops off the red circle.

From what I know simplification causes person who stands on square to drop it down. Tank has the time to move from the square “he’ll drop”. Unless there’s no agro drop mechanic I still don’t see the reason for 2 tanks here. Unless there’s a possibility that if boss stands on the square that will collapse he’ll reset or wipe the raid. Or “one-hit” the tank with simplification circle. I simply want to understand the real, serious reason why 2 tanks are “must have” here. I can agree that tank switch can make things easier for the tank cuz he don’t have to pay attention on the boss just focus on droping circle, but if that’s the only reason then it’s not “must have” cuz a lot of people, in fact most of the progressive guild tanks can do multitasking without problem.

Don’t get me wrong, I’m propably the very known “fun-boy” of 1 tank attempts and but they’re usually a good ideas. I’m not making this question to say your guides is bad or something, God knows you’re the reason we succeed on the all our runs and we couldn’t do that succesful progression without your site. I’m asking because I’m very curious about that and consider your team a kind of specialist in newest content.

The time u did guide on Dashroode HM/NiM with 2 tanks. We did it that way but at the very begining of the expansion we had problems with push him down before last shield drop down. My guild found later that it could be worth trying it with 1 tank and 5 DPSes. Many other guilds from what I know are doing this fight that way now. Same thing for us with Styrak. Everyone was talking that enrage timer is insanely shorter then on any other fight, maybe this is fight for one tank? We tried that, succeed, never tried with 2 tanks again.

Well, if you want to one tank this encounter, I don’t see anything to stop you if you can handle the simplification thingie with just one tank. We still two tank the encounters you described so for us we just never thought of one tanking things. Try it and let me know how it goes 🙂

We’re going there on saturday. I’ll let you know and post the video if we kill him.

Ok. 2 tanks are needed from this reason: during simplification tank is losing aggro, what’s interesting, the boss seems to be immune for taunts from tank with aggro (I taunted him during the cast and right after the cast and he still went to someone else). It’s not like on Draxus with granade that tank need to be rdy for fast retaunt, here retaunt won’t work. If offtank will taunt him during the cast the boss will jump to offtank.

One other SM difference that isn’t listed above.

Affliction can be cleansed.

Dulfy, any idea how and when does the Thundering Blast “bounce” around the room?

U mean jump on your DPSes? U need tank switch on Simplification, off tank should taunt during the cast. Don’t forget also Thundering Blast is cone dmg, so face him back to the group.

Not sure, if jump on DPS, it looks like it is bouncing off walls

Can’t get the hang of the boss aggro on this fight, he just randomly seems to aggro on different people. We thought Simplification was a threat drop, but its just randomly changing aggro at random times. Its not even people pulling because one tank randomly got aggro off another when the tank that pulled wasn’t even attacking the boss.

We found out today that if you’re having issues with the damage going out in this fight, you can bring three healers and still kill him with 4-5 platforms left. (Assuming you drop them all and don’t waste any by cutting them off.) Even worked with a dps in half 69s as one of our 3 dps. OFC off-dps by the healers would help with this but at least for my part, I was not bothering, and it turned out fine. An alternate strat that’s worth a shot if the damage gets to be too much.

Also, if you time it right, you can drop two simplifications on one square to conserve squares. Can be risky but it’s possible.

II know it been around for months, but like Nakira said, this became easy with 3 healers. in fact, the first time we beat it, we lost our main tank within the first minute and still healed through it so we figured we only needed one tank. Now, we just use one tank and 3 heals and set our highest dps off to the side to take the thundering blast. Our tank taunts right as Simplification ends so the next highest threat (the dps not using an aggro dump) takes thundering blast and then its only really healing those two and positioning and easy mode.

Dulfy something change with tactics? Tyrans after simplification use strange buff called Marked for Death
“You are marked for death. Only the power of a Dreadmaster can remove this mark”

There is a bug Tyrans got NiM mechanics in all difficulties.

What this guy said.

Anyway, to remove that debuff, you have to jump off the edge and interact with the holocron on the floor. Doing so gets rid of the debuff and lets you continue doing the fight without issues.