Calphayus is located at the top right entrance of the palace (Sanctuary of Eternity). 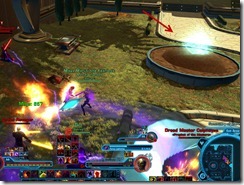 Split your team into groups of 2. Each group with a tank, healer and 2 DPS. 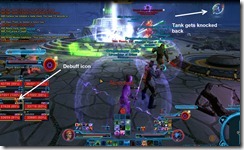 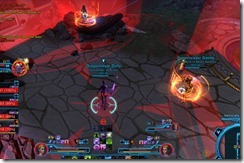 The future team’s room has the boss and Dread Defiler adds that spawn to cast Mass Affliction. Your #1 priority is to kill off the Defiler adds before they can get their cast off (15s cast). You cannot kill off Calphayus in there but if you get him to 20%, he will become immune to damage and stop attacking the group. 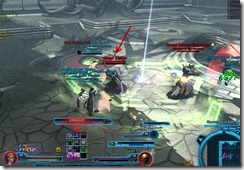 Your goal here is to find the Dark Growth. It can spawn in one of five spots. In this picture, it has spawned in the back left position. 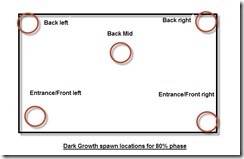 Once you have located the Dark Growth, relay the location to the Past team. Do not attack it. 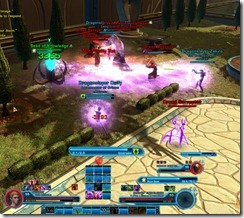 You need to keep the seed alive for 75 seconds, until it finishes the Pure Seed channel. During this time, the Future team should have told you where the Dark Growth has spawned.

Once the seed has finished channeling, , pick it up and plant it at the the location indicated by Future team. If done correctly, you will receive message that the Corruption of Future has ended. 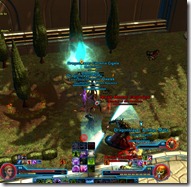 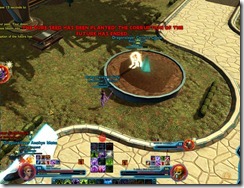 Once Phase 2 had ended, players should prepare to get teleported back to the “present”. Calphayrus is still at 80% where you left him and tanks will need to grab him immediately and turn him away.

Phase 3 is identical to phase 1 and more of a filler phase.

At 50%, the same two portals open again but this time you must pick a different portal from last time.

Keep damaging Calphayus until he leaps to one of the four fountains and smash one of the crystals. When this happens, you must relay the fountain location and exactly which Focus Crystal has disappeared in that fountain to the Past team. For the crystal location, we find it helpful to use the clock system since the position of crystals on every fountain is different and the clock system is just more accurate. 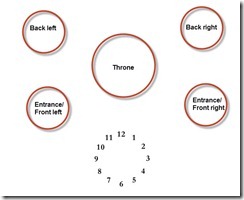 If the Past Team has destroyed the correct crystal, then Calphayrus will be knocked down and be vulnerable to damage again. There is a time limit of 30s to destroy the correct crystal since Calphayru’s Dark Empowerment (which makes him immune to damage) only lasts 30s and if he finishes channeling then you fail the encounter. 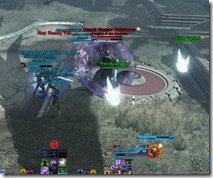 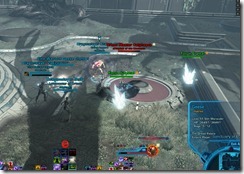 You will need to do this two more times before this phase completes.

Your job is to locate the crystal indicated by the Future team and destroy that specific crystal. Calphayus will harass your team inside the past room but if you damage him down to 20% he will go immune and stop attacking you.

You will need to do this three times for each crystal that the Future team tells you to destroy. 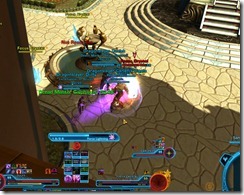 This phase, like phase 3, is exactly the same as phase 1 and intended to be a filler phase until you damage Calphayus to 20% and reach phase 6.

Like the previous times, two portals open again but this time instead of splitting your raid into two, have a healer/tank go into the Past portal (blue)  and rest of the raid head into the Future portal (future). You can also have a DPS going into the past portal instead of a tank if your DPS is good.

The tank/DPS will find a Seed of Knowledge pyramid object at back of the Past room behind the throne. They will need to carry it back to the entrance and exit the portal. They will continue to take damage while carrying this Seed of Knowledge and their movement speed will be slowed. Do not use any stun breaker or anything that enhance your movement speed as doing so will cause the Seed to disappear. 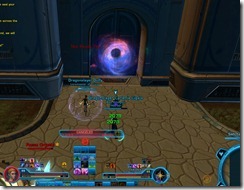 Once the Seed carrier has exited the portal, they will need to deposit it on the altar on one side of the throne. This will place a yellow circle on the same location inside the Future room. Make sure to tell rest of your raid where you placed the Seed of Knowledge. 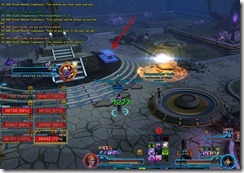 There are two seeds in the Past portal room but the same person cannot carry the second seed again. Need someone new to carry it for the second time.

Tanks need to make sure to taunt him even when he is immune as he might bug out and reset otherwise.

Calphayus cannot be damaged until the Seed carrier has placed the Seed on the altar. He will be able to attack you so you will need to heal the tanks. Once the Seed has being placed, a yellow circle will appear in the same side of the throne that the Seed was placed. Drag Calphayus into this yellow circle while staying out of it yourself and the yellow circle will knock Calphayus down, allowing you to damage to him for around 10 seconds. 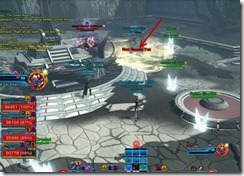 There are two Seeds of Knowledge available so you have about 20 seconds in total to kill him. If you fail to kill him within the time limit, the encounter will fail.

We tried this one in normal mode 16 last night and it appears that one DPS in orange side was one shotted by Calphayus.

Do you have any information about this ?

Mass Affliction debuff can be cleansed by Sage/Sorcerer if you have some.

At the begining of Phase 4 you say that you must pick a different portal then the one you picked in Phase 2. Why is that? Could you explain pls? 🙂 Thank you.

You get a debuff that makes it so you can’t enter the same portal you went last time again. Apparently this debuff doesn’t work in phase 6 as I was able to enter both portals without issues.

Does anyone know if you can use “phase walk” while carrying the seed in the last phase? 🙂

One other tip for Phase 6: have Juggs pick up the Seed of Knowledge and then Intercede to another team member.

This works even better if you chain the process:
-Have a Sorc stand near the entrance portal to the Past.
-Have a second member of the Past team stand in the middle of the room near the throne.
-Jugg picks up the Seed.
-Jugg uses Intercede on the person standing near the throne.
-Sorc uses Extrication on the Jugg to speed them the rest of the way across the room.

Phase 4:
-The crystal that Calphayus smashes has a light blue-colored reticle on it in the Past, allowing the Past team to find the correct one without being relayed by the Future team.

Phase 6:
-You have an unlimited amount of Seeds of Knowledge instead of only 2.
-If your’e caring the Seed of Knowedge, you can use certain speed boost moves (Force Speed, at least) without it disappearing.

Hey there, I just want to know if anyone has had the same issues as we had yesterday. After I already mentioned that Raptus was buggy the time we went Dread Palace (–> look at the Raptus guide, my comment) Calphayus really topped it all. We tried the first few times (random raid so we whiped quite a lot) and at our last try all of a sudden he doesn’t do anything at all anymore. He just stood there, I tanked him, we just nuked him down. He did the red circle sometimes, no portals or whatsoever, an we even got loot. So…again, wtf?! I’m not making this up! I thought Bioware fixed the bugs

The same thing happened last night with my group. After a few wipes we were able to just burn him down from 100% to 0%.

This just bugged for us, the phases didn’t happen. Easiest boss ever.

So to clarify. Hard mode. No debuff on tanks. No past/future phases at all.

Can a guardian use guard leap while carrying the seed of knowledge?

He bugged on the final phase for us tonight. We couldn’t move him until the seed was put on the table in the past. He just stayed in front of the throne. We had to make sure the tank was standing in position before the seed was placed in the past. so the boss jumped into position.

We found him to have an enrage timer on 16M HM when doing it without some of our usual DPS.

He enraged as soon as we dropped the seed the second time on the final phase, killing everyone with Endless Torment. We killed him at 570 seconds (from pull until 2nd seed dropped) but at 583 seconds he enraged.

The enrage is at 9 minutes on hardmode. We had Parsec on last night and we died at 9.06 and we died because of the enrage.