A guide to Dread Master Raptus, the fourth boss of Dread Palace operation introduced with patch 2.4.

Enrage timer: Unknown but it is fairly tight due to his high HP.

You will start the fight with Raptus in a tiny room fairly soon you will be teleported to a circular platform where you will remain for the rest of the fight. Tanks should try aim to tank Raptus in the middle of the circular platform if possible to give room for Raptus’s AoE attacks and avoid getting knocked off the platform. 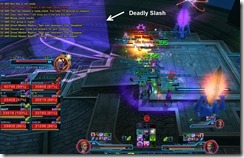 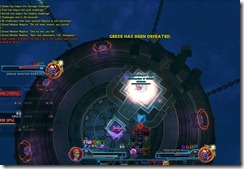 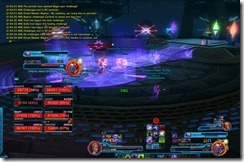 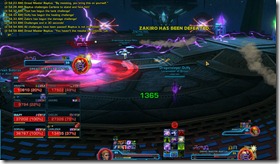 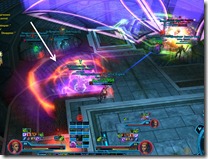 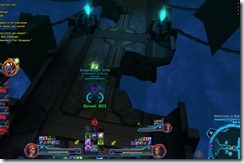 Immediately after getting teleported to the big platform, Raptus will become immune and players will need to run up to the stage that he is standing and grab their curses. You will need these curses in order to enter the challenges. 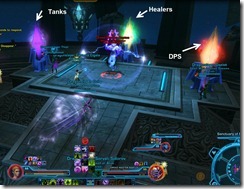 At around 75% and 50%, shortly after everyone have grabbed their curses, Raptus will directly challenge a player (usually a DPS) and then open up three of the six portals on the edges of the circular platform. You have exactly 1 minute to complete all three challenges but if you do them fast you can complete all three within 30s. 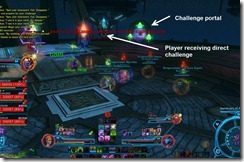 Each of the portals have a different challenge

After you finish both set of the challenges, rest of the fight is pretty much killing him while avoiding his knockbacks and especially his Force Execution attack. Make sure you grab the curses as they can help you even if they are not required anymore for challenges.

Just don’t look? It’s not hard to not look.

Perhaps you dont dps him during the waves ?? or you’re just killing all those groups too long

You could go to the Draxus page, you’d get more help…

I’m not sure if I missed it in your guide or not, but the mob that the DPS have to kill has a debuff that lasts 20 seconds. The timer starts as soon as 1 person enters the room. If they don’t kill the mob within that time, they’ll fail the challenge.

In the section about curses you are talking about shrines. It’s not a big deal, I am sorry, but is it a shRine or shine in Green and Purple?

Hey, I’m not making this up or something, I’m pretty sure that what happened to us today is not supposed to happen – we startet the fight and everything went as it should, as soon as the boss reached 75%, the challenges started. One tank stayed outside and one other player was kiting, as described in your guide. As soon as the DDs and the Healers entered their portals the mobs inside were either not even there or they just disappeared before we could even do something. Then we got a few messages, something like “Your DDs are weak” or whatever, same for the healers. That happened two times and after that he was unkillable because he buffed himself because we “failed” at our challenges. I was just wondering…WTF?!

All three groups must enter portal at the same time. And also tank, that stayed outside, can kite boss as well.

Believe me, we did. I went in yesterday with my other character, yesterday everything went fine and we managed to kill Raptus easily. But check out my post at the Calphayus guide, we had another “hilarious” thing happening yesterday.

Maybe a bug. When you misses challenges, Raptus gets 10% more damage each time if it’s dps who fail, 2.5% less damage if it’s heal and so on.. He becomes immune between challenges so anyone can get buffs from shrines, but it’s normal encounter thing.

As far as I’m aware, the only mechanical difference between this fight on SM/HM is that Dread Execution doesn’t have the insta-kill red circle.

Otherwise, it’s simply a matter of Rap hitting harder and having more HP.

What exactly is the tank supposed to in his challenge? I went in, there was a guy I could attack with like 200k health. Here you say all we have to do is not die…well I stayed in the whole time and never died and then it said I failed…really confused…the 2nd time around I tried to attack the guy but no way I can get him dead all by myself. again, failed.

No I went in the purple portal, the DPS got their guy down. This guy had some sort of buff that was doing AoE damage that was ticking on me but that’s it. I could stand there and he wouldnt attack me, but his aoe would hurt me…I would stand there the whole time and then it would tell me I failed. We only had one attempt before we had to quit so it could have just been bugged. Apparently the healing one is bugged on SM as well.

No as long as you survive you pass. It looks like it tells you you fail in error if one of the other challenges fail. You actually passed, its just the announcements must be programmed for pass and fail either it says u all pass or you all fail(even though u don’t get the tank buff on him) just speculation though.

I don’t know about bugged, but all of my abilities couldn’t keep that Dying Captive up.

I’m willing to admit I must be doing something wrong in the tank challenge. I’ve stood in the middle of the AoE pulse, I’ve worked the mob over with my tanking rotation, I’ve taunted, I’ve attacked, I’ve stood around and soaked up damage. I’ve gone in on my PT, Jugg and Sin, and I always fail the challenge. My self-esteem is starting to crash because he calls me such mean names when it happens.
Is there something I’m suppose to do besides absorb damage in there? Help me Dulfy, you’re my only hope. 🙂

I have used Defensive cooldowns, Dark Ward, Force Scream, Flame Screen, which helps mitigate damage, is it just I have to take so much damage to succeed and my normal rotation is mitigating it down too much?

Tip for HM: When Raptus announces his challenge and targets a BH, they can use Hydraulic Override and won’t be pulled by Raptus and lose their curse. This allows them to enter the portals while the tank just kites him alone. Makes the DPS challenge a whole lot easier.

LAst night we did Storymode. The enrage timer was very long since we failed the healing and tank challenge both times and the DPS once. We still got him down to 7% and he still wasn’t enraged.

I don’t see anything mentioning his Driving Thrust, how it works, and how to deal with the insane amount of damage it does.

Seems to occur if tank with threat get too far to him. Deals ~30k damage. It is not something we encountered often if he is tanked properly.

mate i doubt you could or would do half of what Dulfy has done for the community. i won’t degrade myself to your level and call you stuff, but try to be nice when making a point, it don’t cost anything.

what do you think killed Anakin in the video?

Not sure if you’ll read this or not Dulfy, but Driving Thrust is hitting a bit harder these days and I’m interested in any mechanics you know to avoid it. Other than getting to far away while i have aggro, I’ve also had this happen while I’m face tanking him while both tanks are right on top of the boss. Any thoughts?

Do you know how you got Raptus to challenge a DPS? Every time I’ve done the fight (in SM), he’s always challenged a Tank, and usually alternates between the two. If/when we ever get to HM, given the comment about possibly needing both tanks to go in, it’d be ideal to know how to ‘force’ him to focus on a DPS.

How does he know the roles though? The crystals?

I think Update 2.6a broke this fight. Last week we one shotted this guy no problem. Earlier today we noticed he was doing driving thrust on our tanks when they were in melee range. Also about 75% of the time when our tanks ran thru him during deadly slash it would still hit them that might be they didn’t move fast enough But I don’t think Driving thrust is suppose to be used in melee range and isn’t suppose to be used 2-3 times in a row.

I don’t know what I’m doing wrong, but the tank challange constantly fails for me even on storymode. Could it be that I cannot use defensive CD? Or that I’ve to stay above a certain percentage of health? Can anyone help with this?

Be sure that you do not attack the helpless victim, if you read the debuff on them it says something like “they must be shown mercy” My bet is that attacking them fails the tank challenge (unless it bugs again)

I wonder if you can dodge “Force Execution” with assassin “force shroud”?

You won’t literally dodge it, but (iirc) you can resist it and not take any damage if you have shroud up. Also consider cloaking it if you have the utility that grants 2/4 seconds if shroud when you cloak.