A detailed guide to the various SWTOR Galactic Starfighter ships and their components. Please note that we have a GS build calculator which is slightly more user friendly! 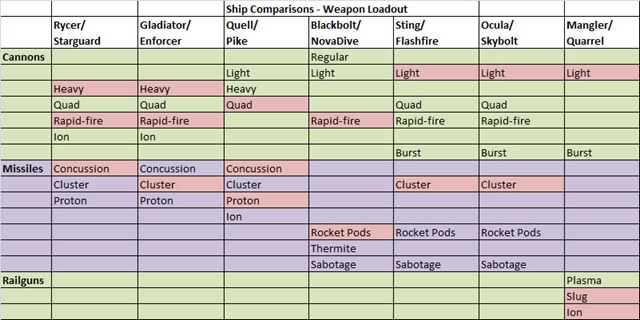 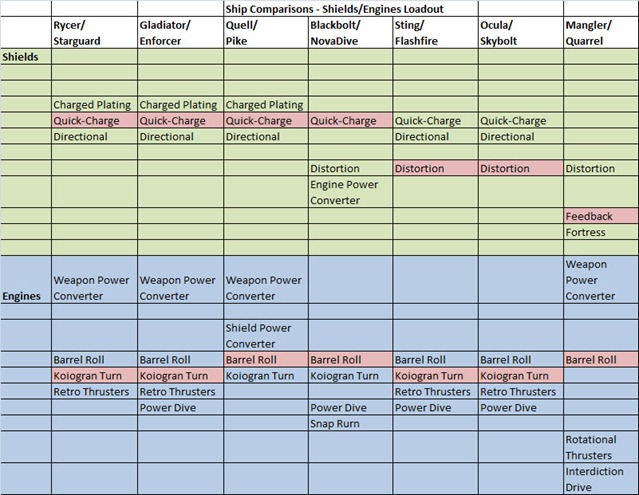 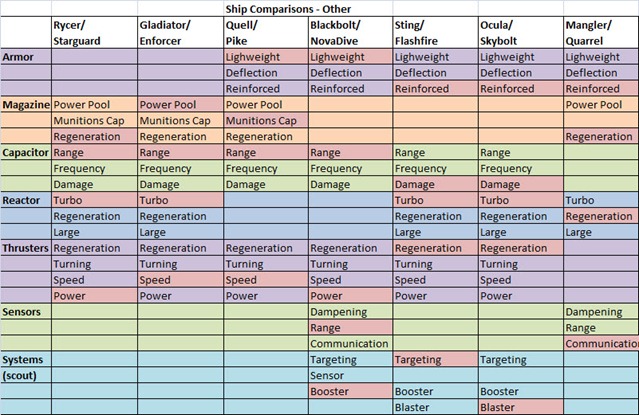 Bombers fall into two classes. One of them carry a drone turret and missiles while the other carry mines exclusively. Bombers will be available in Feburary.

The Sernpidal shipyards’ B-4D Legion bomber utilizes drone technology at every turn. The Legion’s drones can be used to strike at foes, reinforce and repair allies, and offer new battlefield strategies, turning the bomber into a versatile and devious wildcard. In addition to its basic laser cannons, the Legion can equip either a missile or mine as a secondary weapon, giving it further means of destroying foes.

The Elsinore-Cordova Warcarrier is designed to carry and deploy automated drones to strike at enemies, assist allies and reshape the field of battle. Its basic laser cannons can be augmented by secondary missiles or mines, but while it possesses the bomber class’s usual resilience, its ship-to-ship combat abilities remain limited. When properly utilized, a Warcarrier can bring a terrifying range of technologies into play, leaving enemies scrambling to adjust

The M-7C Razorwire is the ultimate Imperial minelayer, built in the Sernpidal shipyards and loaded with some of the most dangerous ordnance in the galaxy. The Razorwire carries multiple sets of mines and possesses expanded ammunition capacity, allowing it to deploy deadly traps and barricades wherever required. A moderate sensor range and long-range communications systems allow Razorwire pilots to coordinate with allies, but as with other bombers, its dogfighting capability is poor

Elsinore-Cordova’s Rampart Mark Four bomber is a minelayer first and foremost. With extended ammunition caches and two distinct types of mines, the Rampart is capable of laying down barricades any squadron would fear to penetrate. Its defenses and primary weapons match the bomber baseline, while it has a moderate sensor range and excellent communications systems. 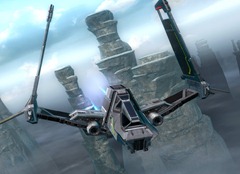 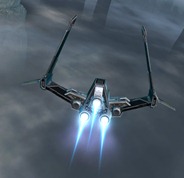 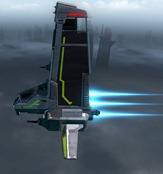 The ultimate Imperial dogfighter, the F-T6 Rycer (named for an ace Imperial pilot of the last war) is a product of the Dromund Kalakar shipyards. The Rycer can be fitted with two primary blasters from an arsenal of options, including multiple laser and ion cannons; properly equipped, it can destroy or disable foes at any range. The Rycer is even more maneuverable than most strike fighters, but its defenses are less formidable-a fair trade, according to its pilots 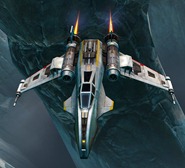 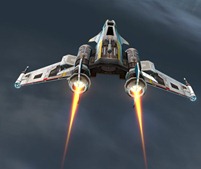 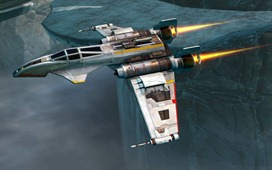 Rendili has been producing Republic starfighters for centuries, and the FT-8 Star Guard is the company’s latest achievement–a complete redesign of the FT-5A Honor Guard model. The Star Guard carries two primary blasters and gains maneuverability over other strike fighter-class ships at the cost of defensive strength. The Star Guard can support an array of laser and ion cannons that allow it to engage foes at multiple distances, but its lack of heavy ordnance makes it less effective against armored objectives. When it comes to dogfighting, however, there may be no finer ship in the galaxy

As a venerable starfighter design sold to security forces on many of the worlds conquered by the Empire, uncountable thousands of TZ-24 Gladiators have fallen into Imperial hands over the years. Adapted from the larger TZ-2 transport, the Enforcer was designed to serve as a rugged, no-frills combat fighter for long campaigns in remote regions. The Empire has done little to alter the model given its excellent performance record, and regularly fields the Enforcer alongside its standard starfighter complements.

Designed before the start of the Great Galactic War, the TZ-24 Enforcer remains a highly popular design, and serves as the mainstay of dozens of planetary defense forces throughout the Republic. The ship’s designers took great pride in the rugged simplicity of their design, hoping it would provide long years of use even the galaxy’s most remote sectors. Given its extended history of service with minimal need for upgrades, the model has surely lived up to its designers (and buyers) expectations.

Tradition is as important as innovation at the Dromund Kalakar shipyards, and each new design must also honor the past. The F-T2 Quell brings an old name to a fresh exemplar of strike fighter design, possessing speed, maneuverability and good defenses coupled with twin secondary weapon systems that can be switched over mid-combat. This flexibility enables a Quell to carry (for example) both ship-to-ship missiles and torpedoes, allowing it to take on both enemy vessels and stationary objectives

Well-armed, well-armored, and with the speed and maneuverability pilots expect from a strike fighter, the Rendili FT-6 Pike carries two sets of secondary weapons along with its primaries, allowing it (when properly equipped) to swap between ship-to-ship missiles and torpedoes mid-combat. This makes the Pike a versatile fighter, able to eliminate enemy ships and armored objectives in the same attack run. Some starfighter pilots are specialists, but Pike pilots are ready for anything

Scout ships also come in two variants. One of them is the standard agile and lightly armed variant while the other is a heavily armed scout that is comparable to a strike fighter. 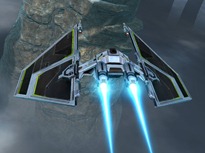 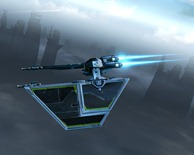 The Imperial Tandankin shipyards produce a small number of elite scout craft used for both reconnaissance and lightning strikes. The S-12 Blackbolt combines extraordinary speed, maneuverability and strafing capacity with powerful sensors and communications rigs. Enemies can be spotted early and their locations relayed to allies–or a Blackbolt pilot can take foes on directly with short- and mid-range laser cannons. Stationary objectives are prime targets for the Blackbolt’s rockets. The Blackbolt has only bare-bones defenses, however, with weak shields and a thin, unarmored hull. For that reason, Blackbolt pilots often earn reputations as thrill-seekers or suicidal fools (or sometimes both) 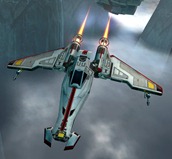 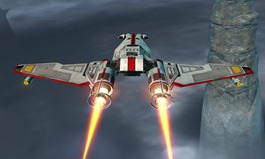 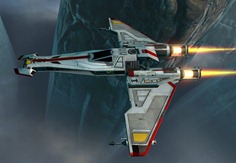 The centerpiece of Corellia StarDrive’s scout ship line, the NovaDive is designed to provide the ideal balance of reconnaissance and offensive capabilities. Advanced sensor and communications suites allow NovaDive pilots to quickly spot enemy craft and relay their positions to allies, while mountings for short- and mid-range laser cannons and rocket pods ensure that the craft can hold its own against enemy fighters and even strike at armored objectives. Unfortunately, defensive systems are meager at best; veteran pilots have learned to rely more on the NovaDive’s speed and maneuverability than its shields or armor to survive tough engagements. 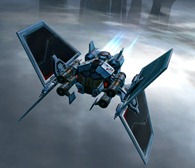 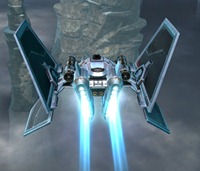 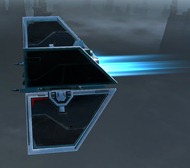 The shipyards of Tandankin have served the Imperial war machine for decades, specializing in experimental designs. With its array of laser cannons, ship-to-ship missiles, and hardened armor and shields, the Tandankin-built S-13 Sting barely qualifies as a scout, but it maintains considerable sensor and communications range diminished only in comparison to other scout-class vessels. Its weapons and defenses still don’t match those of a full strike fighter, but it can be just as deadly in the right hands. 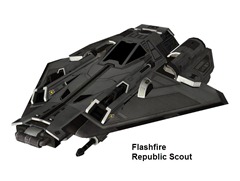 When Corellia StarDrive appeared on the verge of losing its military contract, the company refocused on a new scout model–one that would trade away sensor and communications range along with specialized sensor tech in return for more powerful laser cannons, mid-range missiles and stronger defenses across the board. The result is the Flashfire, combining other scouts’ speed with deadly offensive capabilities. A Flashfire may not compete head-on against a strike fighter, but its maneuverability may be the edge a skilled pilot needs

IL-5 Ocula (Empire)
The Czerka IL-5 Ocula was the company’s first entry into the modern scout starfighter field, and utilizes a number of proprietary miniaturization techniques to ensure that nearly all popular internal components can be accommodated. Imperial military officials have shown a particular fondness for the design, ordering thousands of the craft through intermediaries while Czerka executives turn a blind eye. Imperial pilots often employ the craft on long-range reconnaissance missions into territories where their standard scout ships would be quickly recognized.

Although the Republic military officially passed on Czerka’s IL-5 Ocula in favor of designs from Corellia StarDrive, a number of regional governors and "flexible" fleet admirals have made the craft a common sight on Republic flight decks nonetheless. Flight crews have a great appreciation for the ease of installing a huge variety of aftermarket components (a rare feature from Czerka), and many pilots have come to favor the design over their standard-issue scout models

There is only one Gunship class ship at the moment. 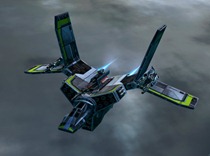 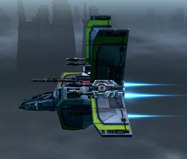 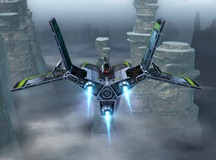 After the Empire’s conquest of Sullust, Imperial engineers put several local SoroSuub factories to work creating starfighter parts. The SoroSuub-built GSS-3 Mangler sports two kinds of swappable railguns, strafes relatively rapidly and has an augmented communications range. Its defenses are more than acceptable, while its weaknesses–unimpressive sensors, speed, and turning rate–are standard for the class. Rumor has it that one Mandalorian clan even requested Manglers for payment when the Empire bought its services 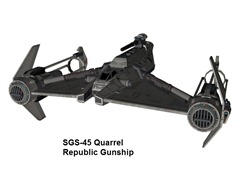 The Sienar SGS-45 Quarrel carries swappable models of long-range railguns, giving it versatility as well as firepower. Its speed and maneuverability sit at the unimpressive gunship baseline, but it can strafe quickly and it has an impressive communications range. Hotshot dogfighters occasionally sneer at the Quarrel’s "workmanlike" build–until they see a skilled gunner devastate an enemy squadron without taking a single hit 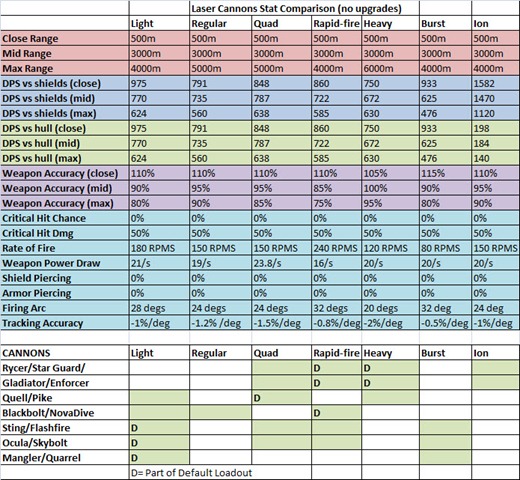 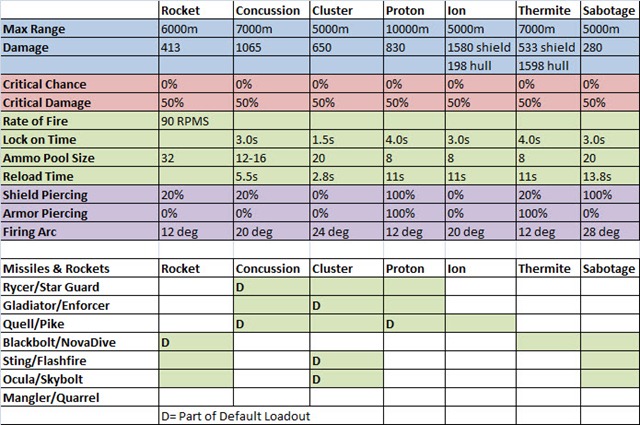 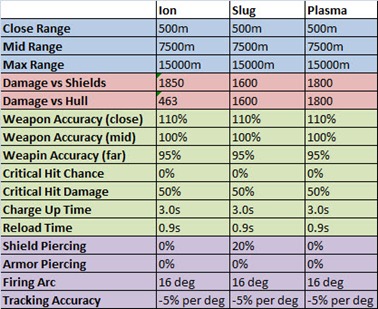 Systems is a term being used to apply to a lot of components. This section is devoted to the system components that are exclusive to the scouts.