A guide to the companions and crew system within SWTOR Galactic Starfighter. Updated Nov 22, 2013.

Under each crew position (except co-pilot) is a specific roster of companions you can select. Some of the companions in that roaster is locked but you can unlock them via 3 ways:

If you are wondering, you can indeed pick companions of other classes in the same faction (i.e. a sorcerer can pick Blizz, the bounty hunter companion). This doesn’t make much sense from a lore perspective but keep in mind that Galactic Starfighter is separate from the ground game so anything goes.

For the co-pilot position, you select one of the companions you picked for the other four crew positions. This companion would have two jobs, one of them being your co-pilot while the other one would be maintaining whichever other crew position they were assigned to.

What this all means is that each ship is not only modified by the components you picked but also by the 8 passives bonuses and 1 active ability provided by your select of 4 companions.

One additional thing to note is that if you sort all of the companions like I did here, you would notice that the passives are restricted by compartment. You get 4 choices per compartment but you must pick 2 out of the 4 choices.

The son of prominent officers in the Imperial Army, Aven Geth was always destined for greatness–or so it seemed. Upon reaching adulthood, Aven joined the Navy, where he excelled as a shield technician–that is until his parents, feeling slighted by his choice of military branch, pulled all the right strings to have him summarily discharged. Maintaining an upbeat and unflappable air, Aven deflected his parents’ cruel machinations, patriotically offering his services to any Imperial-aligned starship crew that would have him in spite of his abrupt disgrace. So long as he continues to fight the Empire’s enemies, Aven feels he will yet prove himself to be a loyal and worthy combatant.

MZ-12 began its service to the Sith Empire during the Great Galactic War as a simple maintenance droid aboard the personal cruiser of Darth Immern. When the Darth disposed of his crew in a fit of frustration, he had to turn to the MZ unit to help manage the ship’s many systems. Though not designed for such duties, Twelve was able to help guide the ship to an Imperial way station, where Darth Immern had the astromech’s programming upgraded so that it could serve as his personal navigation droid.Since Immern’s death during the First Battle of Bothawui, Twelve has been in search of a new home. It is now quite adept with ship comms and sensors, and is known to have a bit of an ego about it.

It doesn’t much bother Salana Rok when people call the Chiss woman an alien, as that’s what she’s felt like all her life–even among her own kind, even among family. The closest Salana’s ever felt to belonging was as hired muscle for a crime syndicate on Hutta. She eventually grew bored with breaking bones on that seedy planet, however, so she has since opted to turn her love of aggression into a career as a starship gunner. While often dour and restless, Salana is known to display an enthralling intensity and gleeful passion for causing her enemies to suffer. She doesn’t quite understand what she needs to finally feel at home, but she hopes she’ll find it someday out among the stars.

There is nothing Writch Hurley loves more than technology, and he’s not averse to letting it be known. In fact, he can be frequently caught carrying on about hyperdrive motivator cores and microfusion condenser arrays when no one’s even around to listen. Writch’s random babbling gives him the air of a scatterbrain, but his relentless chatter only helps clear his mind, allowing him to focus on whatever objective is laid before him. Writch’s eccentric and irreverent persona might cause those of a more serious bent to bristle, but there’s no denying that he’s a major talent worth putting up with. He hopes his hard work will one day bring him to the attention of his not-so-secret crush, noted Imperial technology guru Darth Acina.

Adopted by prominent Imperial socialites who named him after his faded-gray skin, Ashy was often shown off as though he were a house pet. In his formative years, however, the Rattataki did not get the joke and took his adopted parents’ grooming very seriously, believing in their desire to have him one day become an Imperial officer. An early attempt to join the military academy on Dromund Kaas forced Ashy to finally see the painful truth. Humiliated, he defected to the Republic, where he has excelled as a weapons specialist. Ashy takes great pleasure in exacting sweet revenge on the Empire one operation at a time, always making sure to send holorecordings to his disowned family that depict his every triumph as a proud soldier and citizen of the Galactic Republic.

The defensive strategy rendered by B-3G9 in the First Battle of Bothawui is often cited as a primary reason for the Republic’s victory in that grand conflict. Sent to its factory of origin for upgrades and maintenance as thanks for its service, Threegee was somehow caught in an administrative mix-up. By the time the Czerka factory discovered its mistake, the combat analysis droid had already undergone partial circuit remapping to conform to protocol-droid conventions. As a result, Threegee has become a war strategist with a polite and self-effacing manner. While Threegee can no longer reach its former heights of tactical faculty, the droid is still quite deft with shield-to-power conversion calculations and starship defense management–though it does tend to fixate more over its faded glory than any recent accomplishments.

Even as a young child, Kendra Novar had a particular affinity for complex calculations. She successfully sliced her first computer system at age seven, and by the time she reached adulthood she had amassed a fortune in ill-gotten credits–assets that were lost to her when she was finally captured and jailed. Recognizing her potential, the Republic offered Kendra the chance to put her skills to use for the navy, which is where the young savant truly started to shine. Exuberant, innovative and sentimental, Kendra popularized the naming of a particular evasive ship maneuver–the "Koiogran Turn"–after her home system of Koiogra. She sometimes feels the tug of her old life, but it’s never enough for her to foolishly scrap this second chance.

From the very first time the Ithorian witnessed the arrival of a ship on his homeworld, Oro Wogawa has been utterly fascinated with spaceflight technology. As Wogawa sees it, mechanical systems are no different from living systems, requiring an equal amount of attention and nourishment. After stowing away on a pirate craft, Wogawa taught himself to provide such care to ships’ engines and began a career as a hired hand on any ship that would have him on its crew. Though Oro has learned to adopt a certain level of coarseness necessary to cope with crew dynamics, he is at heart a caring being. This is why, after witnessing the cruel, controlling nature of the Sith Empire all across the galaxy, Oro has opted to dedicate his affinity for the inner workings of starships to anyone who opposes them.

Since Galactic Starfighter uses the four new companions on each faction by default, here are all the default passive bonuses they provide. Note that the Empire and Republic bonuses are mostly the same except for bonuses 3 and bonus 7 (left is Empire bonus, right is Republic bonus). The reason for this is that two of the companions are not identical mirrors of each other in their passive abilities and causes this discrepancy.

The default selection for companions isn’t ideal for every situation. If you want to handpick your own crew, here is how I would do it. 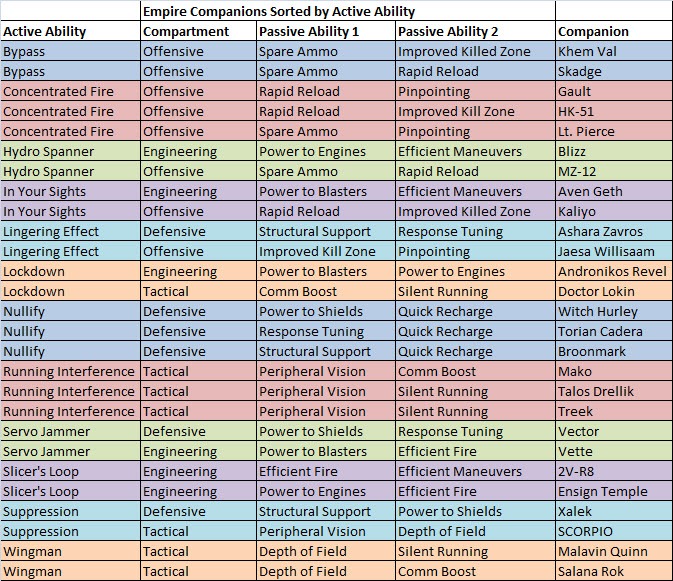 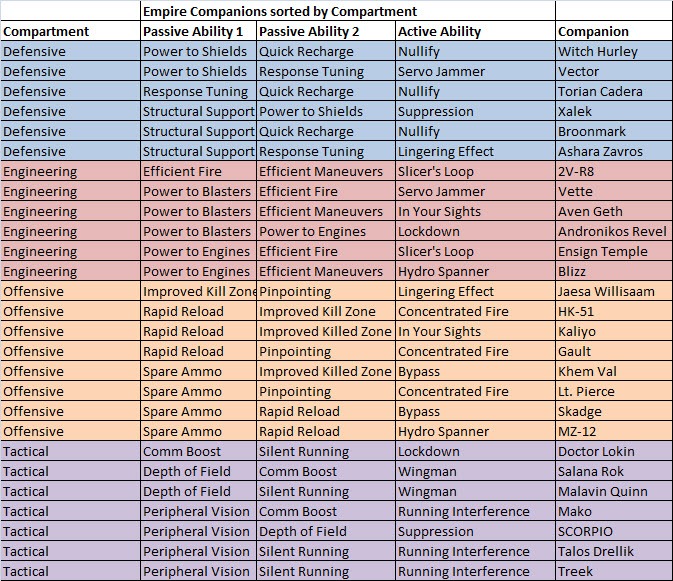 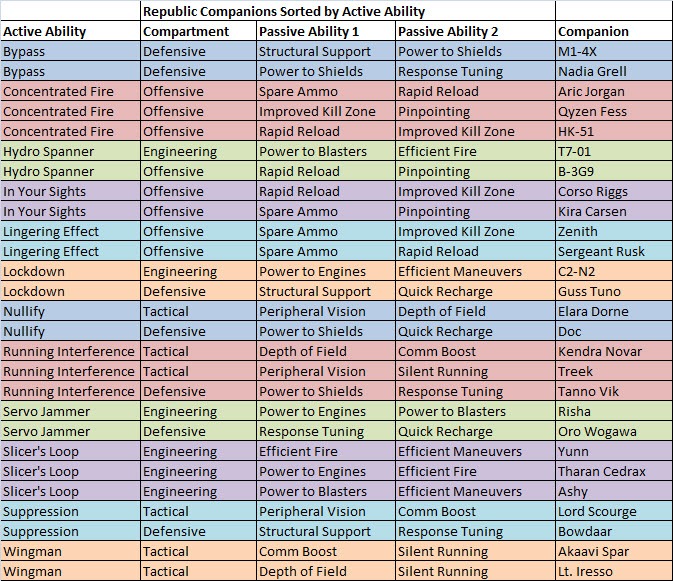 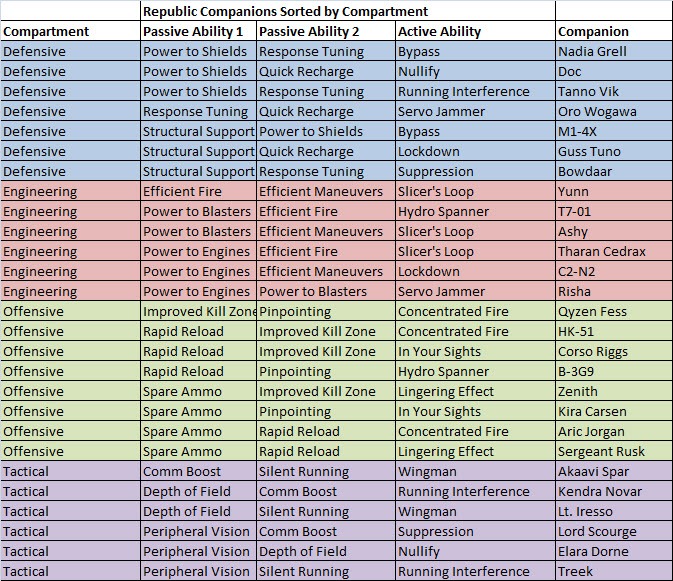