Achievement guide to GW2 The Nightmare Is Over Living world achievements.

All of the achievements and dallies below  will count towards the meta. Doing 12 achievements/dallies will reward you with another tricolor key and 25 AP points.

This map shows you the location of the Toxic Spider Queen (has 2 spawn locations, usually people camp by the Viathan Waypoint and run to Gap waypoint – spawn location 2, if it gets contested), Toxic Wurm Queen,Toxic Alchemist, and the Tri-color chest.

You have to kill the Spider Queen once to unlock the achievement Aftermath Cobweb Cleaner. You have to kill 5 cocoons. Players will randomly get turned into cocoons during the fight but each cocoon has very little health so they will get destroyed quickly and you may not get the kill credit. 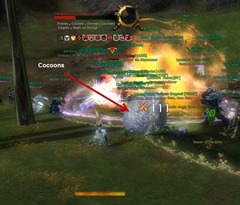 You will need to kill the Toxic Wurm Queen once to unlock the Aftermath Shockwave Jumper achievement. You need to jump over 5 shockwaves, which is harder than it sounds since the shockwaves are very narrow cones.  The best way to get this is to have everyone stack on top of the Wurm Queen and jump whenever you see she putting her head down to do a shockwave. This increases your chance of getting hit by the shockwave since it is a more of a cone. 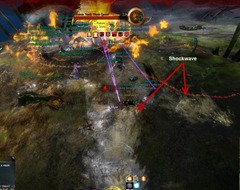 You will need to kill the Toxic Alchemist once to unlock the Aftermath Detoxifier achievement, which requires you to kill 5 Toxifiers. Toxic Alchemist has the longest spawn time and is located on top of the hill marked on the map. He has two forms – a veteran form and a champion form. During his veteran form he will become immune to damage and spawn 2-3 Toxifiers near him. This is your chance to get the achievement for Aftermath Detoxifier. If you manage to get lucky on the kill credit, you should only need to kill the Alchemist twice to complete these achievements. 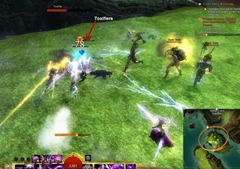 You have to open the Tricolor chest 5 times. If you have any Tricolor keys saved up, this is a good time to use them. Otherwise you can buy one them Majory’s Helper Dee for 30 Pristine Toxic Spore samples and 45 silver once per day. 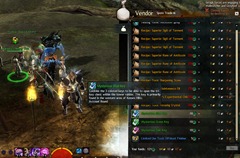 Complete 10 events in and around Viathan Lake in Kessex Hills – you should get this automatically when you do the Spider Queen/Wurn Queen/Alchemist events.

29 replies on “GW2 The Nightmare Is Over achievement guide”

If you Stack on the wurm queen then it is easier to get the shockwave achievement.

The last achievement, Nightmare Terminator, where is it in Kessix Hills? I have 11/12, where do you go for the last one?

Look in the guide in the section below dallies, it is marked there. Or go here: http://dulfy.net/2013/12/10/gw2-the-nightmares-end-scarlets-puzzle-guide/

What are these “Experimental Chiles” for the today daily?

What are these “Experimental Chiles” for todays daily?

Food item, search on TP with experimental chili and you will find it. They sell for 30 silver each though.

That was one ridiculously expensive 1 AP.. Total cost is 1.5-2.5 depends on food. I don’t think anyone in right mind got it.

What is the tricolor key you get for doing everything? Just the same ones that opens chest or is it a trinket or something?

To open the chest.

Tip for Shockwave Jumper: There is a dead Serph Archer on the ground near the worm queen (you can kinda see him in the shockwave picture above towards the far right). I stood around there and literally every shockwave came straight to me every time. Knocked out the entire achievement in one encounter. Kept screaming at the zerg to stack here but they insist on stacking right in front.

will try that up, thx for the tip

Where is the tricolor chest located now that the tower is destroyed?

It is marked on the map.I made

I’ve been slaughtering mobs around the tower looking for keys, but nothing yet. Any specifics on mobs likely to drop them? Does the green key tooltip indicating the central area around the tower mean that green keys will drop off the underwater mobs?

Anyone else have a bug on these achievements? 8/12 completed but only shows 7/12

Nightmare Ender doesn’t count towards the meta, are you counting that one in?

Thank you Dulfy! I guess i misunderstood how everything was calculated =)

I stood right on top of the wurm queen and got the achi in 8 shockwaves after stacking further back and trying over 20 times. Much easier to get credit as you’re jumping multiple ones rather than single ones.

THANK YOU! I spend a couple of days on that achievement at 0% ! I stacked on the worm and jumped and I got it in one event! Thanks!

Aftermath molten extinguisher is today’s daily, but where can I find the mobs I need to kill?

Overload the Molten puzzle inside the Nightmare’s End story instance. This should spawn a couple of molten mobs.

Does anyone know how long “The Nightmare Is Over” living story will be avaialble?

Hi, the next patch in on January 21th, so I think it will last until this update

So, the most recent daily mentions killing one of several toxic creatures, most of which I know where to find: Alchemist, Spider Queen and Wurm Queen. They also listed the Toxic Warlock. Was that a mistake, or is he somewhere on the map?