A short guide to the Life Day event introduced with Patch 2.5.1 on Dec 17 2013. There is also a guide to the Gree event available here.

Head to the Galactic Trade Market section of the fleet and look for a Master of Ceremonies NPC near the GTN. He sells a number of items but the one you want to grab for now is Life Day Snowball Bomb. This is an ability you can put on your hotbar that allow you to throw snowballs at other players and NPCs with a ~14-15s cooldown. 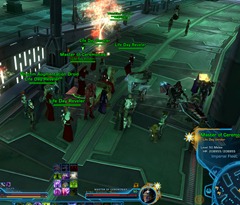 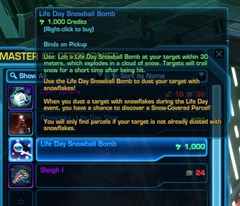 Snow-Covered Parcels are the main currency used in this event. You get them randomly by throwing snowballs at other players with a 15% chance to receive parcels. Despite what the description for the snowball bomb says, you can get parcels from other players even if they have the debuff from getting hit by a snowball (you can also click off the debuff manually). However, if this debuff was applied by you then you won’t get any parcels out of it. Throwing snowballs at companions and NPCs also works in recovering parcels.

The first time you get a snow-covered parcel you will get a popup window and an achievement. From here on you will see a yellow text on your screen everytime you recover a parcel.

Snow-Covered Parcels are tradeable but the ones brought do not count towards the achievement. 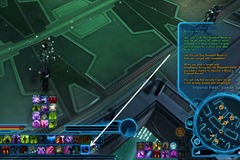 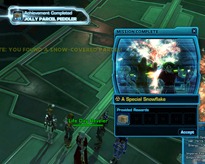 Sleigh I mount sold for 24 Snow-Covered Parcels. It is an adapative mount that is Bind on Pickup. Makes Jingle Bell sounds when it moves (see video). 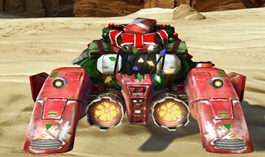 Cyan Sphere sold for 16 Gray Helix Components and 36 Snow-Covered Parcels. Requires Champion standing with the Gree. Bind to Legacy and speeder rank 3 only. 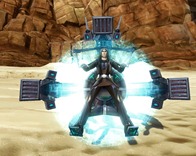 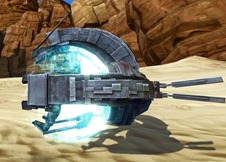 I’m pretty sure the chance to get a parcel is much higher than 1/15. One fan site claims in its guide that the chance is around 15% = ~1/6, which would amount to 36 parcels/hour on average, which seems about right. I got 58 parcels already.

I don’t think it is as high as 1/6, 1/10 seems much more like it. Also depends if you click off the debuff or not as clicking it off goes much faster.

Maybe I am having bad luck but it seems a lot lower chance than that. the 1/15 seems likely.

I just got the Special Snowflake title for 100 parcels after farming for nearly 3 hours. I hold on to 15%. 🙂

Sounds like you just had bad luck. This is as RNG as REing items for crafting. You can throw 20 snowballs without receiving any parcels, and you can receive three parcels in a row.

You are right, it is 15%. A friend of my just found out via datamining.

Can verify that it still procs gifts with people that have the snowball buff. So far 32 parcels in one hour of snowball mania @ the Harbinger.

Can you try throwing snowballs at a target alone? There is a theory going around that if the previous debuff is applied by you then you won’t get any parcels out of it.

I know I had about 3 parcels in a row from throwing at the same companion of someone on the fleet. They would remove debuff then I’d throw. As best I could tell I was the only one hitting him.

Ya if they are removing the debuff then it defeat the purpose. Test is to see if you can repeatedly hit someone by yourself and get parcels without them removing debuffs in between.

I gave this a try and could not receive parcels if the debuff was not removed. I also found that I got them faster if the person had no debuff. Tested this with a friend I would suggest partnering up with someone and only throwing and receiving from them I got all 24 of mine in about 10 minutes this way.

Or..Easier way, pop your companion out and throw snowballs at him/her. Right click debuff, wait for CD on snowball, then hit him/her again. Rinse and repeat. Got all 24 of mine this way in under 30mins. Great for when you’re on your ship or all alone and don’t want the “snowball-ing” mania going on all around fleet. or if you don’t have friends online… ;P

Hmm, I tried this and it wouldn’t let me use the snowball bomb when my own companion was targeted. I also tried on the companions on my ship. I could hit them but not remove the debuff.

Means you’re too close to your companion. Either jump on something (the outer walls on fleet are easy) or throw while running. Can be done though. Also, it only seems to matter whether they have the buff or not if you’re the one who put it there.

Cheers for that. I jumped up onto a crate and could use the snowballs on my companion. One dull evening of repetitious clicking and I have my “special snowflake” title.

I noticed that the debuffs don’t even countdown on any of my companions on my ship, except the ship droid vendor and my dummies.

Well, considering that there was no holiday event last year, that wasn’t hard to top, lol

Underwhelming. Bioware just repleted a few items and actions. And they call it an event.

A lot of people disagree with you.

Just confirmed during Gree Event… Parcels can be granted by throwing snowballs at enemies.

Ant word on the festive tauntaun or Winter Warrior title?

Same here Dulfy, where are these items?

Winter warrior title is in collections. As for the tauntaun, no idea 🙁

Meh, have all parcels and gray helix components but no Champion standing. Too bad it’s bound to legacy.

I haven’t gotten a single one and I’ve been throwing nonstop for 20 minutes. What the hell!

Are you throwing it at the same target for 20 minutes? If the previous debuff on the target is applied by you, you won’t get any parcel when you throw it again. The best way to do this is just to throw it on your companion and click off their debuff before throwing it again

1st Day of Life Day: Myself and others in raid group getting multiple Parcels from throwing snowballs at Xenoanalyst. Maybe that’s what annoyed him so much he started talking. (Surprised the hell out of us) o_O

Do you know if the Cyan Sphere will be avaliable to purchase after the event – providing you have enough parcels and components? First Gree event for me, impossible to get Champion standing in 2 weeks, but possible to farm tokens for the next 2-3 weeks after the event ends.

I don’t know but I would guess no as Master of Ceremony sells it and he is likely to be gone after the life day event is over.

I think that Master of Ceremony is likely to stay for 2 weeks or so. If you check the description for the snowball bomb you’ll see that it applies a possibility of dropping a parcel only during the event. The item will obviously stay in the inventory for cosmetic purposes, and there is no harm in letting the vendor stick for a while since the event currency will not be acceccible anymore. Just like the Gree vendor.

That isn’t how Bioware did the original Rakghoul event, nor the Chevin Scavenger Hunt event. The reocurring ones (Gree, Bounty Hunter) are different in that the vendors stick around even when the event isn’t active, but since this is time-limited, I think it’s quite likely that the Master of Ceremonies will poof at 1000 GMT on the 1st along with the Gree event and the rest of the Life Day stuff.

EDIT: The Vendor did indeed vanish along with the rest of the Events. I still see people trying to sell snow-covered packages at 3-5k each…

SWTOR Support Just confirmed that Cyan Sphere will not be avaliable to purchase after the event and those who will not have Champion reputation by the end of the next week will have to wait until it becomes avaliable again.

Seen several comments about not receiving parcels by throwing the snowball at a target who already has the debuff. Funnily enough I’ve received parcels various times when I’ve done that. The first 10 parcels I got where from throwing it at people around the gree vendors, most of whom had the snowflakes debuff already. Maybe it’s bugged?

It can work on ppl, which not got hitted by you

Throwing it on someone who already has the debuff only appears to work if you were not the last person to apply the debuff on that target.

Noob question. What exactly means that the cyan sphere is bind to legacy? I know that an armor bind to legacy can be send to another toon by mail. But a mount can be too? Thanks in advance!

You’ve got it right.

The mount is bound to legacy as long as it is still an item, i.e. as long as you have not yet activated it. As soon as you activate the mount and it gets transferred into the abilities window, it is bound to that character.

So just buy the item, send the item to your alt, and activate it on your alt.

Thank you very much!

Yes but once you “consume” it on one toon, it becomes fixed to that character. Bind to legacy really just means you can buy it on any character and xfer it to someone else on your legacy.

Interesting note on ways to get parcels: you can throw the snowball and it can trigger parcels on all npcs, even during combat, and even on corpses. Yes, corpses. (still leaves debuff, so only useful once per corpse).

No need to sit in fleet; just go do some dailies and throw them at every mob or corpse you come across.

I have 103 parcels on one character and no special snowflake title. I did buy 45 from a guildie, and also mailed several from other toons just to make tracking easier. my question is, do you just need to have 100, or do you need to actually get 100 drops?

Merry Christmas, Dulfy! Thank you for all your work and contribution!

thank you, happy holidays to you as well 🙂

How long will it be possible to get this achievement? I left my securitykey at home this christmas, I’d love the title special little snowflake though. 🙁

any word on if the winter warrior title might be released again for those who missed getting it last year? and for the special snowflake do you have to get all 100 parcels on one toon or is it just legacy wide?

Legacy wide, not sure about winter warrior title

This looks incredibly silly and I just cant wait for it to activate now ;))

about getting parcels: you can also drop snowballs on enemy mobs, even during fight, and it works too

Anyone know when this event ends? I’d like to go ahead and start buying stuff before I can’t. 🙂