A guide to SWTOR Corruption Sorcerer Healing for PvE. Written and edited by Invinc and Vindrik of Harbinger. Updated for patch 2.7

The Sorcerer healing class has been the all-around preferred healing class since the game’s release. This is partially due to a few nerfs to Sorcerer dps over time, but also because of the simple and relatively easy manner in which they heal. A Corruption Sorcerer’s healing basically focuses on 3 core abilities; Static Barrier (damage prevention), Resurgence (hot and support) and Innervate (Large, channeled heal), with Dark Infusion as the usual filler, Revivification as the AoE heal and Dark Heal for any on-demand fast healing. Sorcerers have the only 8 man AoE heal in the game, which is not only a great heal for the whole ops group, but when used properly can also help you regain HP while Consuming for Force. 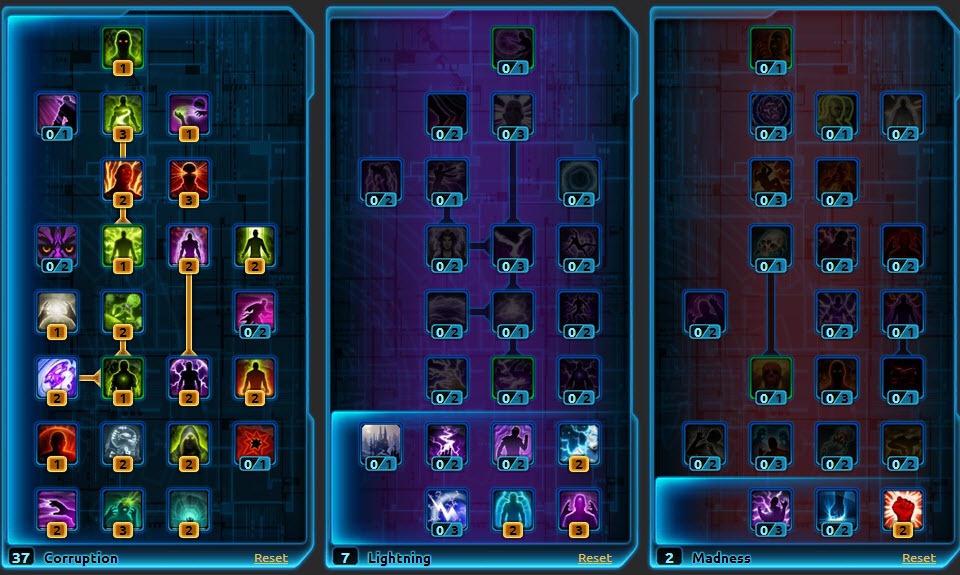 Dark Infusion has a long cast, low cost and large heal, while Dark Heal has a quick cast, high cost and smaller heal. This makes Dark Heal a significantly less efficient heal which should only ever be used when someone requires healing as quickly as possible. Relying on Innervate, due to its 7.5 second CD is a bad idea, as this will leave you with a great deal of wasted GCDs and an overall inefficient style of healing. Static Barrier is not counted as healing done in parsing programs, so this should always be kept in mind when comparing parses.The Force Bending talent is the focal point of your healing rotation and how it should cycle through, as it buffs your Resurgence to give the following buffs to your other healing abilities:

The Force Surge talent, similar to Force Bending, is the focal point of your Force management. It buffs your Innervate such that every critical will give you 1 stack of Force Surge (3 stacks max), which can be used for augment one of two abilities:

Static Barrier should be used on tanks as much as possible, considering that they will be taking consistent damage throughout the fight, the shield will always help with healing. Shielding an offtank before a swap or prior to predictable incoming damage is ideal as well. Shielding a dps or heals in an average rotation is generally a mistake, as most of the shield during non AoE or low damage phases won’t grant any benefit. The best way to utilise your shields on non tanks is either before predictable damage (dots, timed debuffs, AoE, etc) or as a contingency if the person drops to <20%, as it’s a good backup in case the person takes any extra damage before you can get a heal off.

Dps as a Corruption Sorcerer can be tricky, but you have the best resource management and resource pool of all the healers to help with that. Unfortunately, you lack any decent AoE dps that is on par with Orbital Strike or Death From Above, and if your dots are resisted it’s an entirely wasted GCD. The dps abilities that you have access to are as follows:

The default UI setup is fairly horrible so I always make sure to adjust the following to suit my playstyle. Use ESC to open your options menu and go through the Preferences and Interface Editor. Here is an example of my operation UI. I use a Razer Naga mouse so the middle column of abilities is designed to match my thumb grid on the mouse.