A guide to SWTOR Combat Medic Commando Healing for PvE. Written and edited by Invinc and Vindrik of Harbinger. Updated for patch 2.6

The Combat Medic Commando is by far the hardest healing class to play, and the only one that has access to a little bit of everything, but doesn’t excel at anything. Having heavy armor and by far the best defensive CDs as a healer makes them really tough against heavy hitting mechanics, and if used right they have a great dps rotation, but it’s also far more complicated to deliver. Their healing doesn’t rely on anything specific like shields or hots, but instead is entirely based around giving passive bonuses to their allies, making them more of a support healer than the other two classes. They have both quick and heavy heals as well as some AoE healing capability, but their rotation is entirely based around building stacks in order to increase their healing efficiency. They have the worst resource management of all the healers by far, but due to the buffs they provide are also considered the best support. Because of this, they are far more useful in 16 man operations, as their detriments are not as obvious in a larger group, however a good Commando healer is still capable of excellent healing output in any situation. 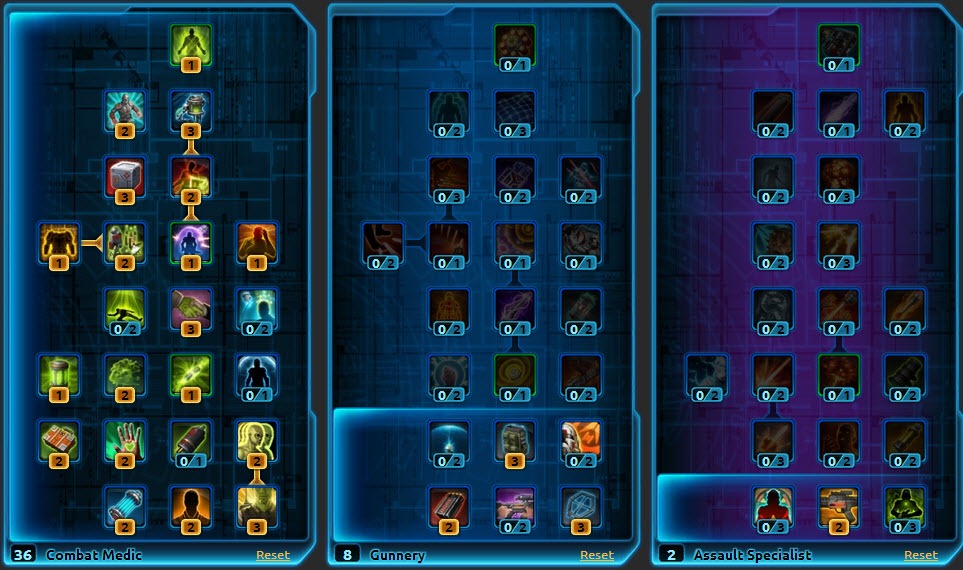 Note: This spec is highly variable based on your play style. If you don’t utilise the AoE healing component of Concussion Charge given by Kolto Wave, you can instead put these points into Med Zone or Treated Wound Dressings depending on the fight. The points from Weapon Calibrations in the Assault Specialist tree can also be repurposed into these talents or Efficient Conversions. Where you apply these talent points should be based on the fights you are encountering in conjunction with your preferred play style.

Note: Thanks to the Potent Medicine talent’s 15% boost to your critical multiplier, there are two ways that Commando healers can gear themselves:

Besides regular Cell management, Combat Medic Commandos also have an extra resource that’s tied into their Combat Support Cell, known as Supercharge. These charges can be gained by using Hammer Shot on a friendly target as a small heal or an enemy target for damage (3 charges), or from Medical Probe thanks to the Field Medicine talent (6 charges). All of a Commando’s healing abilities are rather expensive, with no real way to get consistent Cell generation, and they’re not hugely powerful. Because of this, playing a Commando healer is greatly reliant on skill to try and maximise on the healing that you can do without ruining your resource regeneration. The Probe Medic talent tree provides the Commando with the most powerful applied buffs in the game; with the Preventative Medicine and Armor Screen talents your Advanced Medical Probe gain a hot component as well as applying a +10% armor rating buff for your target, and Kolto Residue and Kolto Pods cause your Kolto Bomb to grant a +3% healing taken buff as well as dropping a small hot on the floor, which has no maximum player limit, as well as the inherent personal buffs of up to +5% Alacrity, +15% Healing Surge and up to +6% Critical chance. In addition to this, Trauma Probe provides 13 charges of healing upon damage taken, while having a reasonable cost and only taking a single GCD.

Commandos have an excellent skill set for dps, especially in tight burn phases that are conducive to using Supercharge Cells. Mortar Volley is a fantastic burst AoE ability that will regenerate most of its Cell cost throughout the channel, Electro Net’s minimal cost and high damage output make it an excellent ability to use on cooldown, and High Impact Bolt is an all around high damage ability, in addition to being able to use Full Auto and Charged Bolts free of cost while Supercharge Cells is active.

Good guide. My main spec is Gunnery, and I’ll agree that the hardest thing to learn about Combat Medic is proper use of Trauma Probe. I still tend to reapply it when 1 or 2 stacks still remain, but until I start running NiM ops, I’m okay with that inefficiency.

I’d elaborate on Reserve Powercell a bit. My usual use of it is to, when I’m starting to get low, burn it on a full-cost Medical Probe to get my full value out of it. Or, if I’ve got room to toss in some DPS, use it for a free Plasma Grenade.

I believe 2 points into First Responder is a little too excessive, as your kolto bomb and kolto pods will be able to proc it with crit, making the alacrity boost almost always present if kolto bomb is used on CD over the raid.
Also, only speccing 1 point into Kolto Residue will still maximize its full effect because of kolto pod being able to proc and refresh it, that means 50% chance for 4 times being applied on raid members provided they stand inside the AoE heal.
With these 2 points taken out while still being able to utilize them, I usually put those 2 points into 4% dmg reduction, since being combat medic is all about taking the least dmg out of all healers passive-wise.

That, or the free concussive charge.

I would like to point put that Psych Aid skill provide bonus healing on any use of cleanse, so it does not really matter that current ops do not have any mental effects – it is still a useful skill to have for dot-heavy bosses.

I’ve got a question concerning generally any build and their respective gear. I unerstand that the optimal gear is Dread Forged, but while I’m not still there what is better – full Oriconian (from ultimate comms) or oriconian + 4 underworld armorings with set bonus? Also the same question for arkanian bonus.

I generally find the set bonus on the low level armorings is worse the stat loss. It also depends on what your set bonus are. Usually the 2 set bonus is a must have but for some class/roles the 4 set bonus can be do without.

I assume that that’s a auto-correct/typo, and you mean that low-level armoring with bonus is WORTH the stat loss?
As for my characters, i’m currently running with 3 55s:
– Sentinel (for the moment with full Oriconian – my feeling is that the set bonus isn’t that useful compared to the added strength that directly translates into DPS)
– Shadow Tank and Commando Heal – here my doubts are bigger, i tend to the opinion that 72 armoring with set bonus is better than 78 without, but when it comes to 69 armorings, which are more available, I’m not so sure.
So any opinion on that point is more than welcome.

Yes indeed a typo, it is meant to be worth, not worse hah.

I know it’s a very late response here, but:
Sentinel: 8% Master Strike damage is huge. Really, really huge. It is worth at least the stats going from Oriconian down to Arkanian armorings for the 2 piece bonus. 48 Strength loss is going to be more than made up for. The 4% boost to damage for 15 seconds after a Zen is a huge dps gain, and easily worth 96 Strength loss.
Shadow Tank: While it’s hard to quantify the 2 piece set bonus, the 4 piece is much easier. I’ve done the math, and Arkanian set bonus armorings provide better damage reduction than Oriconian armorings, and provide the additional elemental/internal damage reduction that is so hard to get for other classes. I can also say with certainty that Rakata set bonus armorings are worth more than Verpine non-set bonus armorings. The Shadow tank set bonus is incredible.
Commando Healer: The 2 piece increases your Supercharge Cells uptime from roughly maximum ~34% to 40%, for a total increase of ~6% healing done (assuming ~19.5 seconds to build up 30 stacks again (2 Kolto Bombs, 2 Advanced Medical Probes and a few regular Medical Probes)). That’s a fairly large amount, and probably worth 48 Aim from your gear. The 4 pieces is much harder to place a value on, but healing felt a lot easier when I had the level 50 set bonus pieces just because of my ability to drop better heals faster.

I’ve seen a lot of people suggest that alacrity is a must for this class, but I’m curious if that is really the case. If I stack alacrity, I parse considerably lower.

If I don’t stack Alacrity and instead go all Power/Surge, I find myself parsing quite a bit higher.

Although this guide says that it is updated for 2.6, the skill tree provided is not the one in 2.6.

You have as your accuracy 101 “Force” and 91 “melee” Commandos are Tech and ranged, right? Either that or I am really really confused hehe

wow never thought that commando heal was hard, never had used a commando and im kicking ass on PvE and PvP, i feel it more easier than sorc/sage or op/scoundrel heals also the AoE heal (kolto bomb) is the one that i use the most and takes me out of trouble pretty easy, but yeah must be only me :), nice guide btw 🙂