A guide to SWTOR Medicine Operative Healing for PvE. Written and edited by Invinc and Vindrik of Harbinger. Updated for patch 2.7

The Operative healing class is the most versatile in the game, as it has both heavy and quick heals, as well as instant hots and emergency abilities, as well as great dps support. An Operative healer relies on 3 important things: efficient use of hots, fast heals, and Tactical Advantage to buff your overall healing capabilities. The Operative is the only healer class capable of battle rezzing as well as being able to stealth rez (Cloaking Screen + Revive), and is by far the most mobile class thanks to its variety of hots, instant casts and simple resource management. Operatives have a reliable AoE heal, which while not as good as a Sorcerer’s Revivification, as it only heals up to 4 people and is cast on a target instead of on terrain, is still an effective method of group healing. 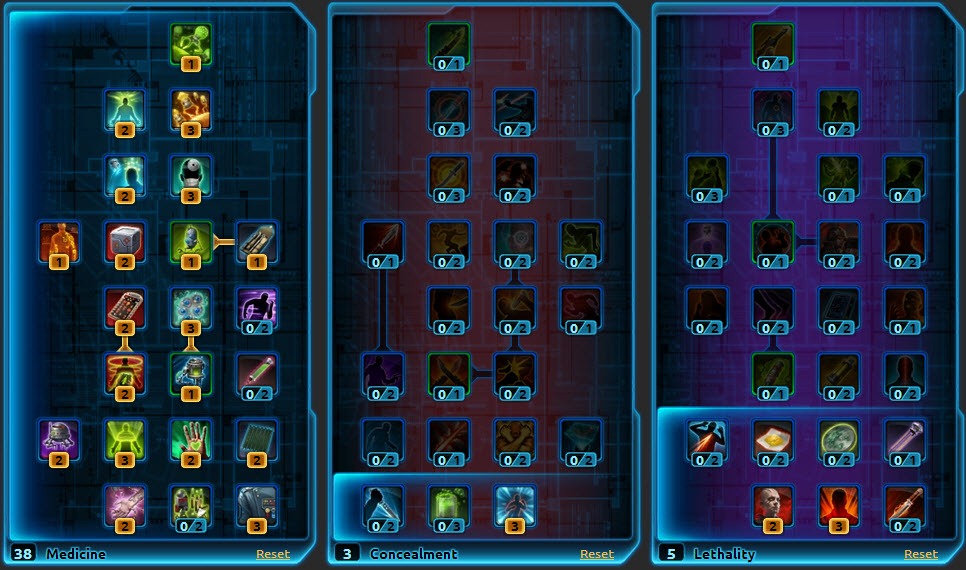 Note: Surprise Surgery in the Medicine tree is a personal choice talent, as while it provides some on-demand Tactical Advantage at the start of a fight, has very little other use, since you will be wanting to save Cloaking Screen for combat rezzing instead of gaining Tactical Advantage. Depending on your primary role in the group, it is often better to instead put these points into Evasive Imperative, or Imperial Brew in the Concealment tree if you are often assisting with group dps (36 / 5 / 5).

A Medicine Operative’s main focus is efficient use of Kolto Probes and Surgical Probes, as these are the most effective abilities you have at your disposal. Kolto probe is an excellent ability, with a very low cost, instant cast and decent heal over time, especially in high movement fights, liberal use of this ability will significantly benefit your healing capability. However, due to the several hot components to many of the Operative’s abilities, they are also prone to a great deal of overhealing. As such, you should make sure that you’re always picking the best ability for the situation to capitalise on your Energy efficiency and not wasting GCDs on excess healing. As with the other healers, an Operative cannot be measured properly through parsing due to the natural overhealing present with the hot mechanics, as well as ensuring that they are dropping their much larger heals on the right targets at the right time. Tactical Advantage is your special resource as an Operative healer, and you generate charges of it through your hot abilities with an internal cooldown, as well as on every use of, Hidden Strike, Shiv, Kolto Injection and Stim Boost, up to a maximum of 3 stacks. The Medical Consult talent increases your healing done by 6% as long as you have a stack of Tactical Advantage, so you should always be trying to keep a stack up at all times, as well as for the benefit it gives you should you need to drop a quick, instant heal on someone.

Dpsing as an Operative healer is a pretty simple and easy job, as you have the best dps capability of all the healers for both single-target and AoE dps. With Orbital Strike, Carbine Burst and Fragmentation Grenade as your AoE abilities and Corrosive Dart, Explosive Probe, Shiv, Backstab, Overload Shot and Snipe for single targets, there is always something you can be doing to help out regardless of where you are in a fight. In a worst case scenario where you may not have enough Energy, you can either use Diagnostic Scan for some faster regeneration, or Rifle Shot to continue dpsing, which gives you some steady and free ranged damage, which is always a better alternative to standing there doing nothing at all.

All of these videos are just videos of typical operation fights.