A guide to the Edge of Mists achievements under Living World release.

1. Head to Lion’s Arch Fort Mariner section, go up the wall and enter the Lionguard jail. Inside you will find the sheriff you need to talk to briefly. 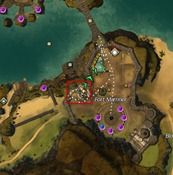 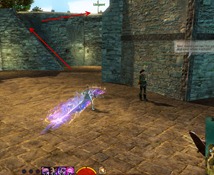 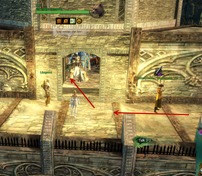 2. The Sheriff will tell you to head to Divinity’s Reach and find Marjory in Dead End’s Bar. 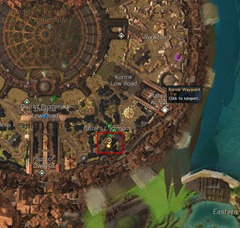 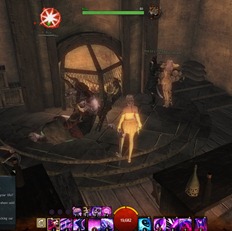 3. After listening to their conversion, you will be directed to Edge of the Mists. 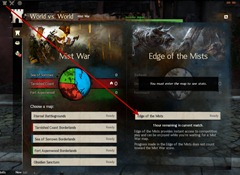 4. You will find Braham right at entrance to edge of Mists  and after talking with him he will tell you to return to Marjory in Divinity’s Reach. 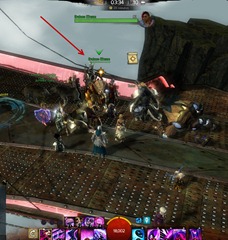 5. Inside the Dead End Bar, exam the holo recording and put the following choices when asked.

When you done, Marjory will done a summary of everything and you will receive the achievement as well as Chest of the Mists, which give you some Liquid World experience, a WvW booster, and limited use finishers. 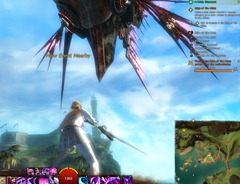 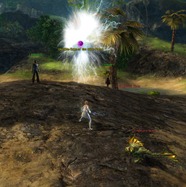 If the portal is up, there will be an icon on the map (looks like a WvW portal icon).  Here is a list of waypoints to copy/paste into your chat window so you can quickly check which map has the portal/event. 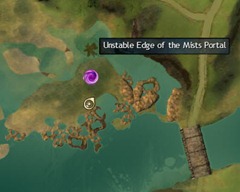 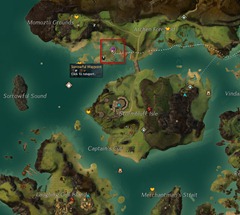 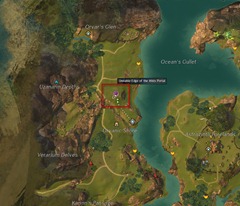 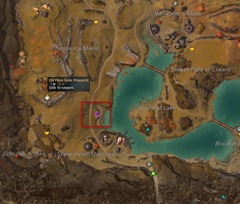 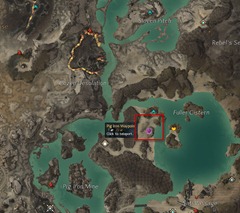 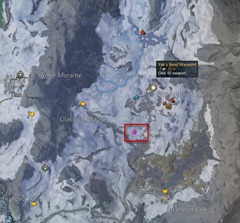 Raiders of the Lost Parts – 15 pts

Go back to Edge of the Mists map and near the entrance you will see Taimi. Talk to her and she will ask you to retrieve golem parts. 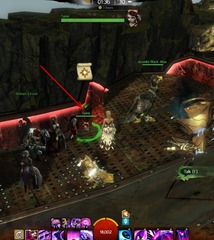 Tip: If your side controls the Altar objective in the Overgrowth area, you can make the next part easier by interacting with the altar and turning it into a Spirit of the Light, which make you immune to damage for 3 minutes. 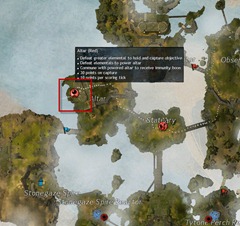 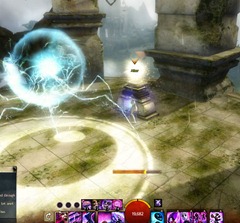 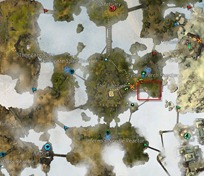 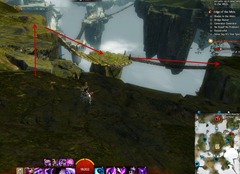 There is a good chance you will get ganked here but you only need to retrieve the golem part and can die/jump off after (Jump off for a hidden achievement). 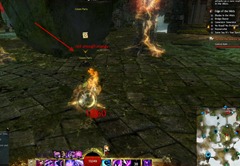 Return to Taimi after you have retrieve the golem parts to get the achievement.

Thank you, as usually 😀

Edit: Oops, n/m – misread your comment about the cutscene. 🙂

anet forcing non-pvp players to do WVW in the new zone to get the golem parts is a typical anet douche move. My server is badly outnumbered by the two other groups in the zone – in 2 hrs of trying we never owned the center zone and I never got close to getting the parts. All I got for my time was ganked over and over by zergs and hidden thieves. Can’t wait for Elder Scrolls to come out – getting sick of anet’s games with new content.

if you feel like you are outnumbered just reload the map going out and back in until you find the instance which has your side/color winning.there are several maps out there, you get a different one pretty much every time you reload.

well combat is a bit so so. but besides i personally liked it

It’s not ‘Skyrim Online’.. it’s The Elder Scrolls Online. Skyrim was a seperate game. ._.
It was a bit of crap though. I’ve been playing since the first started testing it through closed Alpha/beta testing or whatever. It was a terrible way to go with that series, IMO.

Then why am I always on green ? 😐 (blackgate)

Because your server is Green, and that won’t potentially change until Friday.

You do realize that Elder Scrolls Online will revolve around mass PvP very similar to GW2’s WvW? Just as a side note 🙂
However, just as others said your server is mixed with other servers of the same color, so you should be able to find balanced situations where you can retrieve your golem parts. A short “lfg for retrieving golem parts” in the map chat can also make things easier. I’m sure you will find volunteers helping you.

1. For the story you do not need those parts at all. The only thing you must do, is walk into the map, and speak to Braham.
2. People do help get it. But don’t keep doing the same thing over and over, as yeah, you’ll keep dying.
3. As has been said, you are being mixed with other servers of your color, so generally the numbers should be about equal as opposed to normal WvW maps. If it’s not going well, do as suggested and leave, then go back, it’s likely you’ll end up in another map.
4. You have plenty of time, it hasn’t been released for 24 hours, as well as the map is reset every 4 hours.
5. If you are just looking for an excuse to play Elder Scrolls, you don’t need one, just leave. But, even if you end up liking it, eventually you will come back.

It’s a quick and easy run to the center of the map. Pick up the parts, jump off the edge, and then respawn back by Taimi for the turn-in. It can be done in ten minutes, easily.

For those wary of WvW/PvP, this is an easy one to skip. The only rewards for doing it are a few achievement points and a chest that offers WvW rewards, which won’t benefit you in PvE at all. After turning the parts back in to Taimi, she more or less says, “Thanks,” and that’s pretty much it. No big deal.

Ty Dulfy this would’ve taken me hours without this guide :3

Anyone notice that in Scarlet’s journal there were random capitalized letters that spelled “omadd”? I wonder if that was just for fun or if it’s important.

Omadd was her mentor before she got crazy..

the capitalized letters spelling “Omadd” is from the previous living story patch, where you had to find it to activate the holographic projector in scarlets secret lair.

Haha nope. I did Arah storymode a couple times for various guildies before my personal story progressed there and I didn’t feel like going back so no personal story completion for me 😛

Well, if you’re like me, you resist doing the later story quests because Logan and Trahearne are more annoying that a room full of quaggans.

I got the Live on the Edge achievement without doing the event, all I did was enter an unstable portal.

You don’t need to do the event,I only added the note about the event as a FYI as the portal won’t spawn unless someone done the event

ok, so not that big a deal. Got it done at 5:30am eastern today – hardly anyone in the zone. A deeper read of the patch notes reveals that Gift of Battle now requires WVW rank of lvl 30. That’s a larger issue. I already crafted my Predator and really had no plans to make a 2nd legendary (due to uber low mat drops) but this seems like another move to push people into WVW since anet has no real end game content.

This is such a stupid argument. Legendary weapons are meant to show skill and experience from all areas of the game, and the fact people were getting Badges Of Honor from achievement chests stopped them from experiencing, and developing skill in WvW. This in turn lead to a lvl 30 WvW rank requirement on the gift. In 30 ranks of WvW you can easily acquire enough badges to buy the gift without the achievement chest dependence. By no means is it a push by Arena Net for people to get into WvW, it’s a balance. If I am a WvW player and I want a legendary should they remove all the PvE content from it? Doesn’t seem fair then does it. It’s just a balance of requirements, and people claiming otherwise don’t understand the full context.

Best of all is with 54 laurels you can purchase enough liquid WXP from the laurel vendor to get to rank 30, meaning there is actually no WvW playtime requirement if you are that adverse to it.

I understand the context perfectly thanks. Anet has no end game and no clue what they are doing. I got all my honor badges for my legendary by doing wvw before the badges were given away in chests. Anet needs players to embrace wvw as there is no end game and this is just another example.

I was hoping this would be PVE not WvW :/ oh well

It is. The only WvW is an optional run to the center of the map to pick up an item and then jump off the edge. It can be done in about five minutes and only rewards you with a few AP and a WvW reward chest.

‘Something is driving her’ not ‘dividing her’ – probably a Freudian slip Dulfy, m’ dear 🙂

I am strongly bracing myself to not be too disappointed with the conclusion of this story arc.
It’s building into a massive hype train and knowing Anet they simply won’t deliver.
Let’s hope I’m wrong though.

Personally I like where it is going. We got two important loose ends.The first is what Scarlet really encountered when she saw the great alchemy (please dont spoil more, no way to hide spoilers here). The second is what will happen at the final battle in -spoiler place- . Did our destruction of the majorette work? how is the new poison going to be used? what is going one with the magical lines?

I think this has the potential to be a battle that we haven’t seen since the battle of lions arch in gw1. And it feels like its going to be better!

plot twist: what if scarlet doesnt come to attack, but to defend?

Man, I really hope not. Her ultimate motives may be in question, but that little weed is in need of a serious smack down.

Maybe it’s because of this new map, but for a person that just doesn’t enjoy wvw this is a very small patch 🙂

can you see the portal from anywhere or do you need to be in that area to see in on the map?

Need to be in the same map to see it.

If someone’s having a hard time getting the golem parts, you can do something else till a match is almost over (around 3 hours I think), join the game, and when the match is over, you’ll have like 5 min to run and get the parts, most people will have dc’d from map. 😛

Delaqua Investigator is obsolete. It cannot be done as the sheriff is gone from LA.