Preface for 3.0: This article has been updated for 3.0. None of the concepts were changed, but the mentions of out-dated info, like skill trees, have been removed.

Critical Chance – commonly called crit – is one of the most misunderstood and over-simplified stats in SWTOR. Too often a single number or percentage is cited as the target crit level, such as 25%. This simplified answer obscures the relatively easy-to-understand true nature of Critical Chance, and prevents people from understanding exactly how they should gear their character. I will attempt to demystify Critical Chance and help educate on a better way to think about Critical Rating.

Let’s now define what Critical Chance is. It is the likelihood a successful attack or heal will provide increased effect. The magnitude of this increase is based on your Surge percentage. In simpler terms, critical hits or heals do more damage or restore more HP, respectively. In addition, there are many skills and abilities that synergize with critical hits or heals. This can result in increased Alacrity or resource generation as examples.

Critical Rating is specifically a secondary stat in the game. It is commonly found on Mods and Enhancements. It may be surprising to learn that it is a very small component of Critical Chance.

Many Discipline paths will have talents that increase some aspect of your critical chance. The boost may only be for a specific attack or heal, it may be for only Force/Tech Critical Chance, or it boost all Critical Chance.

This is the most complex element of Critical Chance, but also the most commonly overlooked. Each class has a requisite Primary stat or PriStat:

This PriStat affects the character’s Bonus Damage as well as Critical Chance.

Further each class may benefit from a less important PriStat. This will boost the Bonus Damage as well as Critical Chance for a specific type of attack or heal. These effects are:

That said, you should always and exclusively focus on the your character’s requisite PriStat when it comes to gear selection. The only less important PriStat you will ever want comes datacrons, which will cumulatively boost it by 50. Still, depending on your class and role you may not even benefit from the datacrons. For instance, a Sorc/Sage healer could increase their melee damage through Strength datacrons, but since all of their heals are Force abilities there would be no impact to their healing. (Other class oddities like this will be explored in another article.)

In most, if not all, situations you want to maximize your PriStat within your gear. The only notable exception is the unlettered Mods. Many of the endgame Mods available with commendations are the less favorable A variety. These have an overall lower stat budget than the unlettered equivalent. For example, a Deft Mod 34 is always superior to a Deft Mod 34A even though the A variety has higher PriStat.

Critical Rating has been much maligned since 2.0 was released. People often cite the changes to its diminishing returns or DR as to why it is undesirable. This perspective is both right and wrong at the same time.

First off, there was a change to the Critical rating formula when 2.0 was released. Each point of critical rating became roughly half as effective as pre-2.0. Thus, the right perspective on Critical Rating has to due with the comparative value of available alternatives. Ignoring augments, the substitute for Critical Rating in gear is Power. Power was unaffected in 2.0 and continues to increase Bonus Damage by 0.23 per point for DPS and 0.17 for Heals. Thus, compared to its alternative, Critical Rating became less desirable since 2.0.

Next, the DR on Critical Rating is probably not at all what you think. Let’s first make sure we understand DR. Diminishing returns was a concept first analyzed by economists. The concept specifically dealt with the increased utility/benefit one derives from additional units. For example, if I were extremely thirsty I might really benefit from a bottle of water, perhaps I would benefit from a second bottle as well – although I wouldn’t benefit quite as much as from the first. Continuing on, I might benefit very little or not at all from a sixth bottle of water – I might instead benefit from a bathroom. The point being the first unit resulted in the greatest benefit while each successive unit resulted in less benefit. 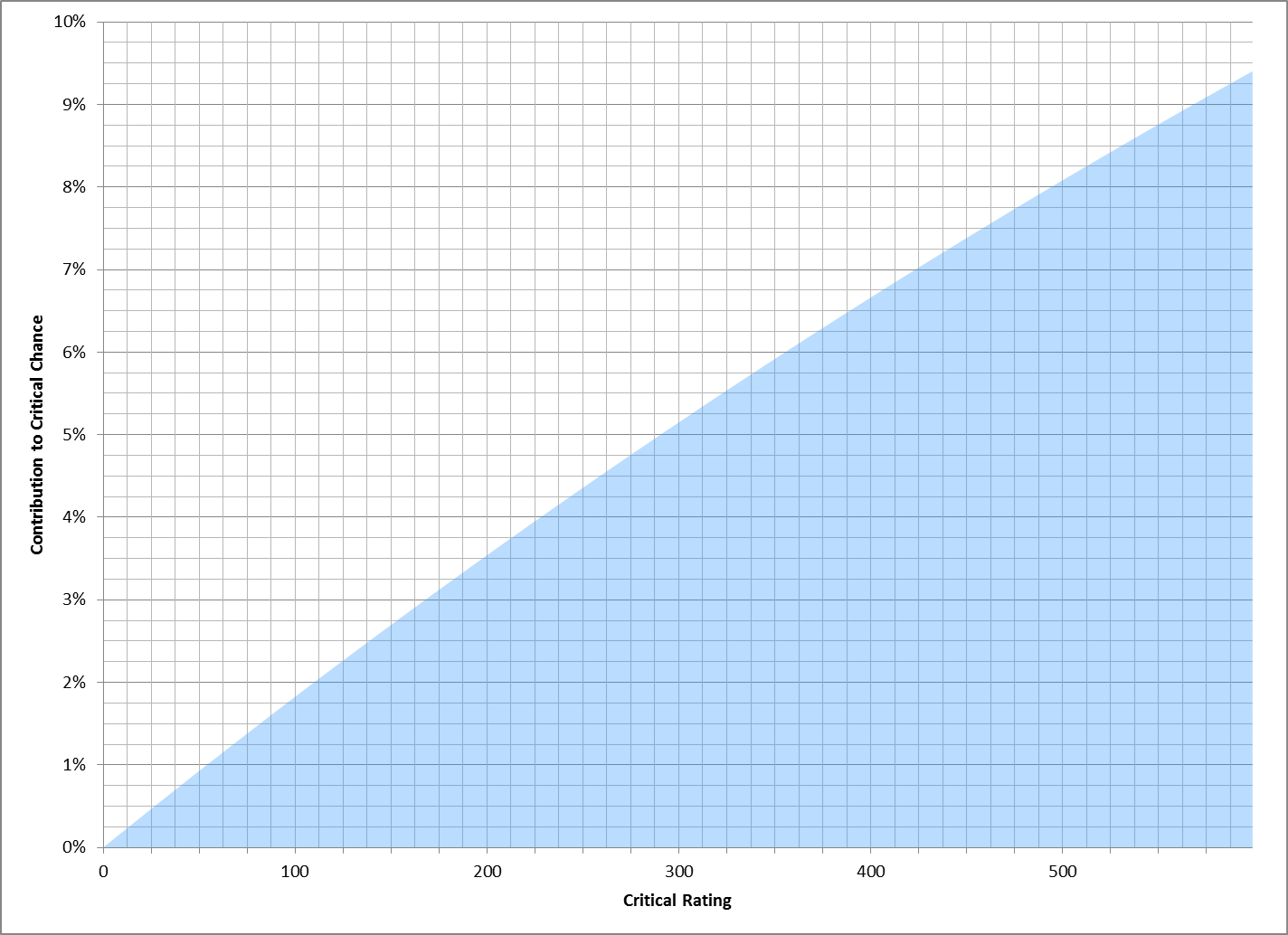 The problem with a single simple target for Critical Chance is it does not allow for natural variation across builds nor does it clearly account for each element.Other issues with this are:

So How Should I Think About Critical Chance?