Preface for 3.0: This article has been updated for 3.0. The concepts outlined here are still accurate although the sample math for Rail Shot has not been updated to its 3.0 levels. The standard damage and healing numbers have changed at level 60 as well to 3,185 and 1,4520, respectively.

Ability tooltips – the text that appears when you hover over an ability – tell players all sorts of useful information about the ability, including its cooldown, resource costs and the effects of the ability. For attacks and heals, the tooltip lists the amount or range of damage/heal the ability will do. Let’s look at an example of this, the Bounty Hunter’s Rail Shot ability: 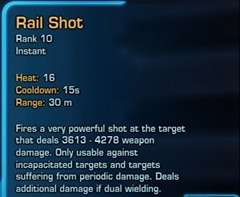 These values are updated dynamically meaning buffs from a Serendipitous Assault Relic or Adrenal will increase the tooltip damage. You may never have noticed this as you often do not re-examine the tooltip values while in combat.

Unfortunately, the amount or range listed only tells part of the story. For instance, they do not account for Critical Chance or Surge and the procs that affect these. This incomplete story leaves unanswered questions and leads to errant assumptions. Understanding the limitations of tooltips will allow you to better understand the mechanics behind your character and what gear upgrades will benefit you the most.

If you look at your Character’s abilities, you will notice none of your abilities are actually categorized as attacks or heals. Instead, you will see a mix of Active, Passive, Melee/Ranged and Force/Tech abilities. All damaging abilities are either Melee/Ranged or Force/Tech. And, all healing abilities are Active, but behave similar to Force/Tech attacks. Thus, we effectively have two ability types to investigate Melee/Ranged as well as Force/Tech, which includes heals. (As an aside, for attacks it is it is important to differentiate Attack Type from Damage Type; this will be discussed in a later article.) 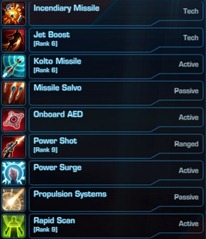 Broadly speaking, there are three components that affect the damage of a Melee/Ranged ability. Coincidentally, Tait just demonstrated this on the Official Forums. The components are:

Let’s examine each component in more depth beginning with the simplest. I want these to be as easy-to-understand as possible, but also complete and accurate so bear with me.

Notice in the above screenshots I have not applied the Sith Warrior/Jedi Knight buff in the Sith Inquisitor/Jedi Consular and Imperial Agent/Smuggler images. Also, notice Strength boosts the Sith Inquisitor’s/Jedi Consular’s Melee Damage Bonus, but Willpower does not boost the Sith Warrior’s/Jedi Knight’s Melee Damage Bonus. The same inequity applies to Bounty Hunters/Troopers and Imperial Agents/Smugglers for Aim and Cunning respectively.

Generally, abilities at the top of your skill tree and executes – only usable on targets below 30% health – have the highest coefficients. Although I did not do an exhaustive search, the highest coefficient I could find was Assassin’s Assassinate/Shadow’s Spinning Strike at 3.09. As another example, the Bounty Hunter’s Rail Shot/Trooper’s High Impact Bolt has a coefficient of 2.02. Basic attacks often have a coefficient around 1.0. These sample values are based on 2.X, but they are still conceptually accurate.

At elder game stat levels, Damage Bonus is always the single largest portion of an ability’s damage. Your Damage Bonus benefits from all of your armoring, mods, enhancements, etc. But, no single item will increase Damage Bonus significantly. Instead there will be smaller incremental gains as you improve your gear.

In the game files, the Bonus Damage Coefficient is actually called the coefficient.

First off, this component is entirely hidden from view; there is no indication of it available to the player in game although it is confirmed here. As the name implies Base Level Damage is common across many abilities. In fact, it is actually based on the level where you learned or last trained the ability. This is why at level 50, 55 and 60 you basically retrain every ability. At level 60, the value is 3,185. Most if not all of your attacks will use the level 60 value.

This value is then modified by a coefficient for each ability. In the game files, these are called StandardHealthPercentMin or StandardHealthPercentMax. For the majority of abilities the min and max values are actually the same. When they are not the same, this component contributes to the range in damage listed by the tooltip.

In the case of Rail Shot/High Impact Bolt we can calculate the Base Level Damage contribution to tooltip damage:

The tooltip for a weapon lists the range of damage it does, and this is a component of an ability’s overall damage. The current best barrels and hilts – 78s – generally do between ~500 and ~900 damage although it varies based on the type of weapon actually used. When an ability is activated, a value within this range is randomly selected. This randomness creates most of the variability in an ability’s damage.

Recall, there is a specific coefficient for this component as well. In this case, it may be easiest to think of it as a percentage of the weapon’s damage. For example, the highest percentage I am aware of is 231% for a Sniper’s Ambush/Gunslinger’s Aimed Shot while the lowest is a Marauder’s Battering Assault/Sentinel’s Zealous Strike at 16.5%.

Again our example, Rail Shot/High Impact Bolt, has a coefficient of 135%. With this we can calculate the main hand Weapon Damage low-end and high-end contribution:

Speaking of Gunslingers, Marauders and Sentinels (and Mercenaries), they are all dual wielding Advanced Classes. They have a second weapon in their offhand. Many of their abilities attack with both hands; the tooltip will indicate this. The off hand damage is calculated the same way as the main hand Weapon Damage; however, it is reduced by another coefficient, which I call the off hand penalty. This value is 0.3. The simplified tooltip damage equation here is:

Once again our example, Rail Shot/High Impact Bolt, has the same offhand coefficient of 135%. With this we can calculate the main hand Weapon Damage low-end and high-end contribution:

As you can see, the offhand contributes much less to the overall damage.

As an aside as far as I know all abilities have the same offhand and main hand Weapon Damage coefficients except the Marauder’s Battering Assault/Sentinel’s Zealous Strike.

As another aside for dual wield classes, you will see two entries in your combat log for each two-handed attack. One of the combat log entries will be just the off hand Weapon Damage, the other entry will be the total of the main hand Weapon Damage, Damage Bonus and Base Level Damage. Considering the added Damage Bonus and Base Level Damage it should be obvious what is the offhand amount.

There are effectively two types of Force/Tech abilities: damage and heals. First, let’s examine how damaging attacks’ tooltips are calculated:

Force/Tech attacks’ Base Level Damage is the exact same concept as introduced for Melee/Ranged attacks. The level 55 base value, 3,185, is also the same. And, most of the attacks have the same min and max values.

Notice in the above screenshots I have not applied the Sith Warrior/Jedi Knight buff in the Imperial Agent/Smuggler image. Also, notice now that Willpower boosts the Sith Warrior’s/Jedi Knight’s Force Damage Bonus, but Strength does not boost the Sith Inquisitor’s/Jedi Consular’s Force Damage Bonus. The same inequity applies to Bounty Hunters/Troopers and Imperial Agents/Smugglers for Cunning and Aim, respectively. This is the opposite situation we saw on Melee/Ranged Damage Bonus.

Force/Tech ability’s Base Level Healing is again the same concept. However, the level 55 value is 14,520. And, unlike attacks, most of the min max values are different. This component allows for the range in healing done.

The Healing Bonus is basically the same as Tech/Force Damage Bonus. As you can see below there is not the inequity from less important Primary Stats when it comes to healing though. 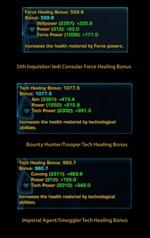 Only two components comprise a Force/Tech attack’s damage as well as all healing abilities. These components are:

As you may know, Patch 2.6 saw a reduction in damage done by Orbital Strike/XS Freighter Flyby. This change in damage was done by adjusting the various components of the ability’s damage. Specifically, Orbital Strike/XS Freighter Flyby is a Tech ability which means its damage comprises Damage Bonus and Base Level Damage. The table below shows the old and new values for this ability:

By reducing these coefficients each tick of the ability does less damage. In this case, each tick only does ~40% of the damage it did prior to 2.4.

Hopefully now, you understand what components contribute to an ability’s damage or heals. This alone does not help you understand how to gear your character, but this needed to be explained so we can delve into more exciting topics such as the two roll system, which allows us to start thinking about Accuracy and the application of Critical Chance.