GW2 Ready Up Episode 8 developer livestream in which the new trait system and a new pvp map will be revealed. 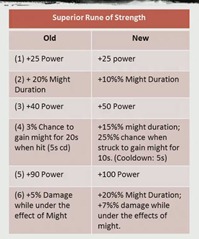 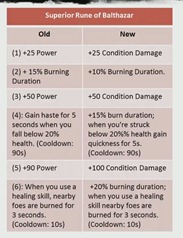 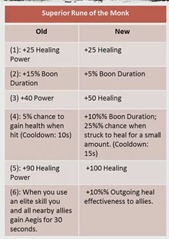 Woo! Thanks for the notes. 😀 Also, got the shoutout on the stream huh? Nice.

Makes me sad to see guardians pushed aside for this update (including taking a nerf too vigor). I just hope melee gets some love in the future, like maybe cripple from symbols?

I have a question…Did Anet have ever play GW2? their fixing/improving logic is kinda weird
: s

rangers nerfed again – THEY BETTER DELETE THIS CLASS…
we are already splitting dmg with pets, and crit is our best attribute as lonbow masters – spotters, and now, they are ruining cit…

from gw site: At level 80, it will take 15 points of ferocity to gain 1% bonus critical damage, which means that there will about a 10% decrease in overall damage for a full “berserker” build.

Yeah, but it sounds like our auto-attack speed is being doubled, which should increase DPS at max range rather nicely.

won’t increase DPS. Just the speed of the arrow, not how fast you shoot.

Unfortunately you are wrong. A simple calculation for the auto-attack (numbers out of my head.) You fire 1 arrow every second. The arrow needs 1 seconds to travel the given distance. That means you shoot, 1 seconds later the arrow hits and you let go the next. With this trait you still shoot 1 arrow a second but it hits after 0.5 seconds. That means you shoot, after half a second the arrow hits. After a half second more you shoot the next arrow. That means the arrow is there 0.5 seconds earlier but it still needs a whole second (0.5 seconds of flight + 0.5 seconds of waiting) until the next arrow hits. If you look at rapid fire, the only change will be, that the first arrow hit’s 50% faster than before. The time between the arrows hitting is still the same. Aaaaand you would have to give up 1 essential trait for this.

The change to crit is universal, so rangers didn’t get nerfed comparitively.

Reduced dps, but upgraded runes and one additionnal sigil on longbow. To my opinion, nothing will really change.

Improving pet responsiveness should make this profession funnier to play.

RIP Guardians with 3k aditional hp? I dare u to try…

It’s still a lot less than other classes.

Sounds like you’ll just need to buy a new set of runes and you’ll be good to go. They’re changing *every* rune set, so surely one will fit your needs, or perhaps even suit your build better than what you have.

Why is Boon duration no longer viable?

And lose the much needed extra condi removal? Please, get out of here.

Ok, am seeing so many changes, that I have to wonder… aren’t we preparing for April’s Fools? We got choppers in GW1, after all…

I am super curious about Traveler rune. It’s a must for WvW roamers and i would like to know it will be worse or better.

It’s not really the topic, but I find the rune of speed more useful. Hope the speed bonus won’t be removed.

So, every character which is already existing on my account will have ALL existing traits unlocked even though not all of the characters is 80 lvl?

Any character was created before the patch will have all the I-XII traits automatically unlocked for them, new characters created after the 15th April will need to buy or find the traits.

Dhuumfire change is still terribly bad … a nerf to one of the weaker classes and most of all it is extremely clunky to use.

If you look the kinda mix everything up, i think to let support and self sustain be aviable with all the trait’s tree…soul reaping that let the death shroud heal lol…combine it with the blood magic trait it becomes some sweet death shroud support lol xD
And necro isn’t one of the weaker class at all lol, just not suited for cornering stuff, especialy when you can dish out a shitload of dmg with both condition and crit, keep an insanely high survival capability and insane cc if needed 😐
But cornering stuff pretty much annihlate anything that isn’t war->mesmer->guardian (only if there’s some heavy dmg dealer stuff in the mobs, otherwise it’s useless too for cornering)

…..yay…..Engineer got 2 turret GrandMaster traits…..now they just need to fix our turrets and make them worth having out

Deadly Arts: Revealed Training – Cause we need thieves that use stealth and one shot lighter targets to be more effective also after they use backstab. By all means dont give us an effective way to counter stealth attacks just make stealth builds more reliable.

question about this new trait setup so my guardian is nearing lvl 30 do i stil got trait points i gotten so far or must restart the whole proces but keep lvling ?

what is the full berserker build?