A list of the images provided with the SWTOR Boulder Colorado Cantina Tour flashdrives. Items of interest includes Orobird mounts and Nerf mounts. Special thanks for mrawesomesauce1/phyltrd on reddit, NickM on the forums, and StellaArtois from JC for sending me the files. 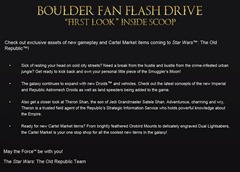 Q&A provided by StellaArtois from JC

Who was there? Courtney Woods, some Australian dude who lost a arm wrestling match, Blain and Cory Butler.