As part of the Feature Pack patch on April 15, dyes in GW2 will also be undergoing an overhaul to become account bound and more.

With the new Wardrobe system changing the way you interact with your gear’s appearance, we felt that this was the perfect time to introduce some updates to the dye system. In the April 2014 Feature Pack, dyes will be getting a significant overhaul. Check out the changes we’re planning to make below! 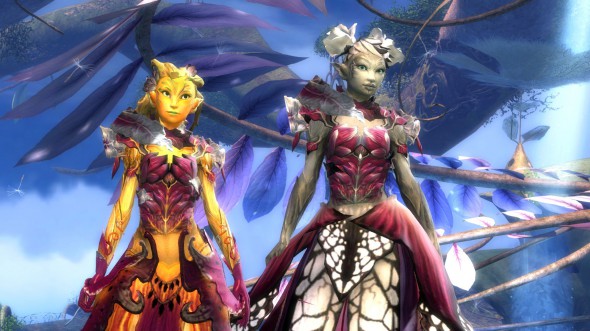 …these changes will make dyes more accessible and easier to use than ever before.

One of the biggest changes we’re making is that dyes will no longer be unlocked per character but per account instead. When you unlock a dye after the feature pack is released, all characters on your account will have unlimited access to that color.

If you already have the same dyes unlocked on multiple characters, when you log in on additional characters, you will receive one unidentified dye for each duplicate dye already unlocked on your account.

With dyes becoming account unlocks, the demand for dye will decrease and unidentified dyes will no longer drop as loot but will still be available from the Mystic Forge and select in-game rewards.

Dyes in the Hero Panel

A new section of the updated Hero Panel will be devoted to dyes. Here you will be able to dye your armors and outfits as well as view your dye collection. 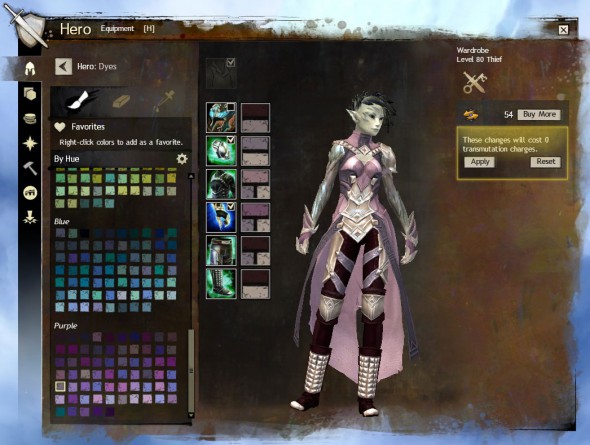 The new Dye tab in the Hero Panel will feature greatly improved dye confirmation, and you will be able to preview dye colors on your equipped armor by simply selecting a color and moving your mouse over the armor dye channels.

We believe all these changes will make dyes more accessible and easier to use than ever before. We are very excited to get a chance to make big changes to such a core customization system!

And Dyes from Recipes ? Will they still be craftable ?

They say in the update that hue specific dyes can still be crafted, so I’m guessing yes.

Thanks, I did not see this line 😉

I would hate to need the unidentified dyes for making the gift of color. Did they mention anything about lowering the requirement for gift of color? Maybe 100 dyes like lodestones for other gifts? If you can’t get them as drops, then I see this having a large impact.

awesome ! i already bought allmost all dyes on my main but i have 0 dyes on the other ones, which is why this is gon’ be tots amazebawls :3

was at 78 on my server when I checked xD

Will the dyes available for different characters be merged into 1 set available for the whole account after this patch or only the dyes unlocked after the release will be account bound?

From my reading, only dyes you unlock after the patch on April 15th will be account bound.

They will merge everything and if you have duplicate on characters, they will give you back and unidentified dye for each duplicate.

this sounds like it might be advantageous to unlock duplicate cheap dyes for multiples characters so we can get a bunch of free unidentified dyes.

I wondered why my stupid pastel dye was going for 30s all of the sudden. Someone must have heard you LOL.

I don’t use dyes much so the account bound part isn’t really interesting to me. The channel preview is something I’ve wanted for a long time though.

Well I feel silly for purchasing more than one Abyss….alas…

I feel stupid to have recently bought all T3 armors and then sold them. It could have been interesting to unlock them in my wardrobe for future characters.

btw am i only one, who notice that small buy more icon at right up ?? are anet fuck*ng kidding me ?? pay for every skin armor use, or change color scheme, if this will be for real money (what it will be, i am sure) i am done with this mutherf*kers, i never think about play monthly fee game like wow, but this is over acceptable level

Maybe for every skin change, but as I can see 0 for color change : )

And they’re grandfathering in the current stones and crystals as charges, so really we’re the same off as we were, just with a better system and interface

You can get shards by completing maps and doing Personal Stories. That’s free, even if you make a new alt just to complete one or two maps and then delete it because you got the handful you needed, the only real thing you are paying to obtain them is sweat and time 😛 Of course if you are in a hurry, pay real $ at the gem store ^^

swtor should do this (i only looked at the picture)

So, quick question. If I have, say the butter dye unlocked on all 9 of my characters, does that mean I will get 9 unidentified dyes? Or does it mean 1 unidentified dye per color regardless of how many more than 2 of your characters have that color?

If you already have the same dyes unlocked on multiple characters, when you log in on additional characters, you will receive one unidentified dye for each duplicate dye already unlocked on your account. — YES, using all the dyes and not selling any of them since day 1 will pay off! And I have 9 characters with plenty of rares unlocked on each one mind you.

Did you literally copy paste the text and put it on your site as a clickbait?