As part of the April 15 Feature Pack patch, PvP rewards will also undergo several major changes and new features such as Reward Tracks.

Hello again Tyria! There are a lot of great new changes happening in the Mists with rewards, gear, build-making, and more! It’s incredibly exciting to finally be able to share with you all of the updates and improvements the team has been working on! 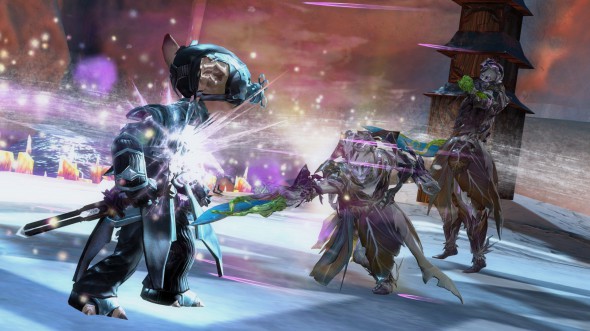 As of April 15, there will no longer be PvP items in the game. The look you set for your weapons and armor in PvE and WvW will carry over into PvP. You can craft your look, develop your style, and take that with you wherever you go!

The stats of your gear in PvE will continue to have no effect in PvP. You are simply carrying over your looks between game types; every player will still enjoy total statistical equality in PvP.

So what happens to all those skins you have been collecting in PvP? Well, by now you’ve probably heard about the Wardrobe system, which allows you to collect skins from across the game. When you enter the Heart of The Mists for the first time after the April 2014 Feature Pack goes live, all of the skins you have collected in PvP will unlock in your Wardrobe. There will be a vendor selling basic, level-appropriate weapons and armor for you to apply unlocked skins to. You will be given a one-time allotment of Transmutation Charges based on your rank in PvP so you can restore or change your looks. You can learn more about the Wardrobe system and how it works in our feature announcement blog. 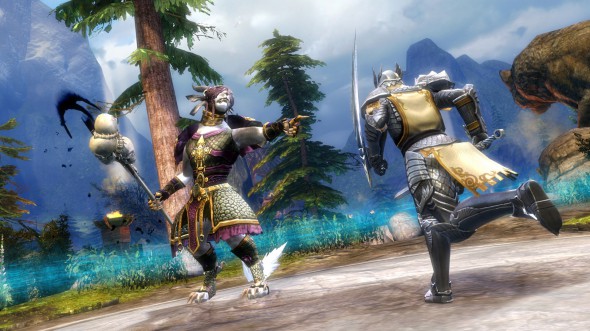 In our December PvP rewards blogpost, we hinted at a new system in PvP that will allow you to set your own reward goals to work toward. We’re happy to be able to share more details about the PvP Reward Tracks system now.

To kick off this new system, we are thrilled to introduce you to the Balthazar Carapace back item that can only be earned through its PvP Reward Track! 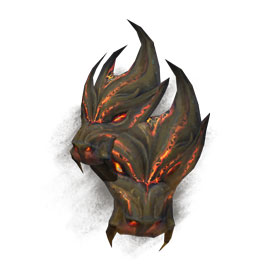 This system will launch with several other tracks, and you can choose which one you want to progress. In addition to The Hounds of Balthazar, there is a Reward Track for each major region in Tyria, allowing players in PvP to earn drops from each corresponding region. 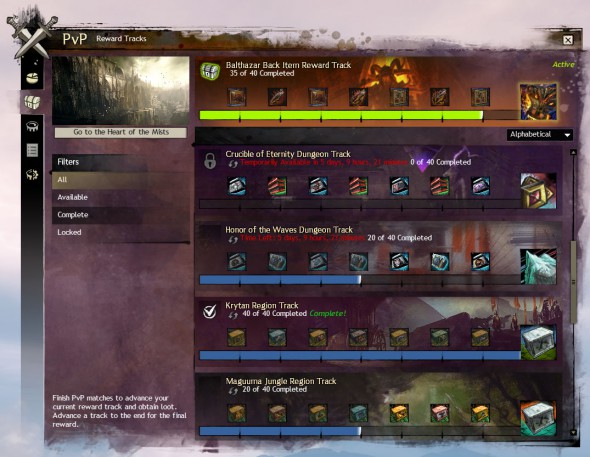 In addition, as new Living World and holiday content is released, associated Rewards Tracks will be available for the duration of those events. Once you have experienced and participated in the Living World content, you will unlock an associated Reward Track so you have the option to continue to receive relevant rewards in PvP. This will ensure that PvP is always a part of the bigger story that is unfolding in Tyria.

Some Reward Tracks are one-shot, some are temporary, and many are repeatable, and they all make PvP much more rewarding than it has ever been. Through Reward Tracks, players who participate in PvP can fully enjoy the rewards in Guild Wars 2. 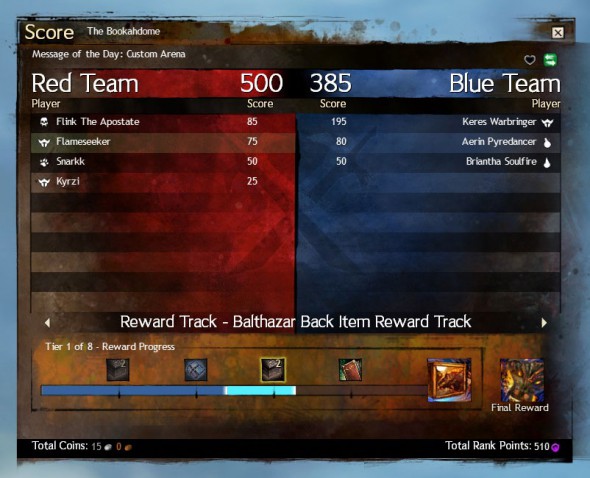 With Reward Tracks, we now have a platform for PvP players to earn the components they need for their legendaries. As mentioned above, dungeon tracks will have dungeon tokens. Other earnable components include skill points, Obsidian Shards, high-end crafting materials, and Mystic Clovers.  There are even chances to find precursors in chests you earn. In fact, with these items and the gold that you earn from PvP rewards, you’ll be able to play PvP to gather almost everything you need to craft a legendary! The Gifts of Battle and Exploration will still require Badges of Honor and map completion.

As a side note, if ascended crafting is your thing, Empyreal Fragments, Bloodstone Dust and Dragonite Ore can also be found on Reward Tracks!

As a reminder, for anyone eager to earn a legendary or precursor even faster, there’s no better way than by competing in the Legends of the Mists tournament that we are sponsoring with the awesome folks at Mistpedia. Top prize for this tournament includes your choice of legendary weapon! For more information, take a look at the Tournament of Legends announcement.

Even with Gear Unification, we still need to keep a few things separate from PvE in the interest of equal stats. To facilitate this, we will be introducing the PvP build panel. 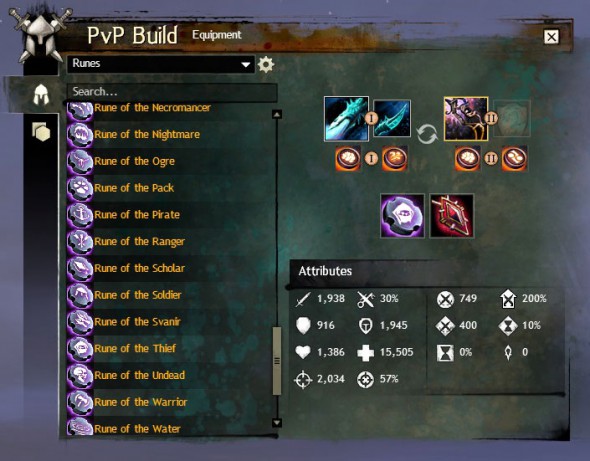 In PvP, you will still have a separate set of build components, including runes, sigils, amulets, and traits. All of these items can be selected and equipped directly from the PvP build panel. No longer will you need to speak to several NPCs and manage a set of PvP-only inventory items. Simply select and equip the appropriate items. To make it easier to make those selections, the PvP build panel includes search and filtering so you can find just the right item for the build that you want to make.

Instead of applying a sigil to a weapon, your PvE weapon sigil will be preserved and in PvP you will apply the sigil to a slot that overrides your weapon sigil only in PvP. The same is true for your runes and stats. As before, you gain your stats through your amulet. One change made in the interest of streamlining the build-making process is that the jewel has been incorporated into amulets.

With this release, we are adding new runes, sigils, amulets, and traits outside of the core set. The core set is always open and available to all PvP players. New runes, sigils and amulets can be unlocked for your account with gold; new traits can be unlocked for your character for gold and skill points. These items are purchased directly from the UI. If it’s locked, simply click on it to unlock it!

The PvP build panel is very easily found from the new Quick Launch bar in PvP located at the top of the HUD. From this bar you can make your build and quickly enter matches in any of the Arena types.

Your equipped weapons will be the same between PvP and PvE as part of keeping your looks consistent across game modes. Your skills will not be part of the Quick Launch bar, but they will continue to be separate as part of your PvP build. Skills continue to be easily adjusted from your skill bar.

After the PvP Rewards Roadmap blog was released, the community came out in overwhelming support of keeping ranks. Additionally, many of you asked us to rebalance rank gain to make achieving high-end ranks more feasible. For those of you who were planning on passing the challenge of attaining dragon rank down to the next generation of adventurers, we have some good news!

On March 18, we upped the rank points players earn from matches. On April 15, all ranks over rank 39 will be rebalanced to be more attainable and consistent. For most players this will make attaining the rank of dragon a realistic goal and for a very small percentage of players, we’d like to congratulate you on becoming Tyria’s first group of dragons! 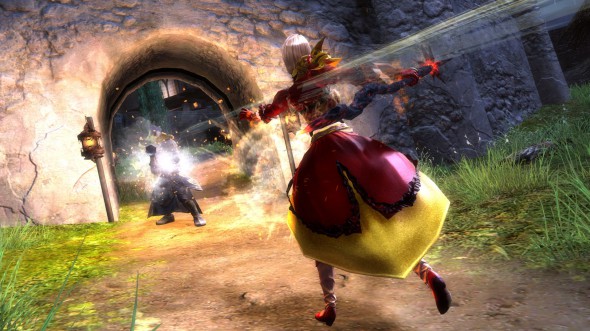 Bringing the Game Together

For PvP, this feature pack was about core rewards, bringing all parts of the game together, and streamlining some of the aspects of PvP that have been difficult for players. We’re excited to tie PvP more directly into the rewards structures found in other parts of the game, from dungeon and Living World rewards right up to the building blocks of ascended and legendary gear! Gear unification means that you can be you and the effort you put into any part of the game can be shown off wherever you go.  Reward Tracks give you control over rewards that truly matter to you and the new build interface will give you the tools you need for build experimentation. It’s easier than ever before to make and fine-tune new builds, which is part of creating an exciting and competitive environment for PvP in Guild Wars 2.

More info from the Devs on the forums

Grouch can you give a vague idea of who will be future dragons (60, 70+)??!?
ALSO with the change to jewels, will I still be able to run soldier zerker, or carrior rabid or whatever?

Everyone in the upper mid 50’s and up will become a Dragon!

When you enter the Heart of The Mists for the first time after the April 2014 Feature Pack goes live, all of the skins you have collected in PvP will unlock in your Wardrobe. There will be a vendor selling basic, level-appropriate weapons and armor for you to apply unlocked skins to.

What is the point of these “basic” armor/weapons if looks carry over from pve and vice versa? You have to apply the pvp skins to them first to unlock them?

The wardrobe is only for appearances, it does not contain usable items. If you’ve never played PvE, or for some reason don’t have actual items to apply skins to, you can get them from the vendor.