A guide to Assault on Tython, a Level 55 tactical flashpoint newly added with Patch 2.7.

Access: The new flashpoints can be accessed via the group finder or via the new hub (Mission hangar) accessed from Mission Departures elevator on the fleet.

Story Quest: There is a story quest on picked up from a droid on the fleet that can give you the new HK-51 companion customizations as rewards. This droid is near the Mission Departure elevator (A7-M1 on Empire, T3-G2 on Republic) ) and will have the Story Arc: Forged Alliances tag under his name. 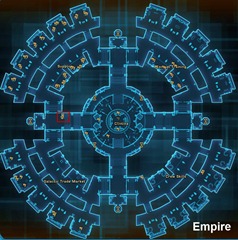 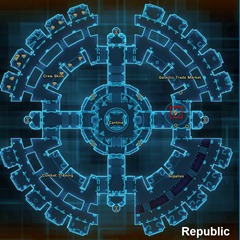 Rare Drops: Many of the bosses can drop rare pets/mounts. Keep an eye out for these new mounts/pets added to patch 2.7. 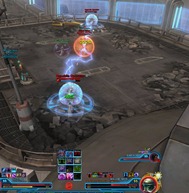 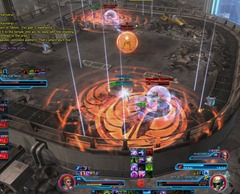 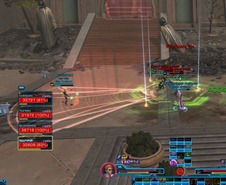 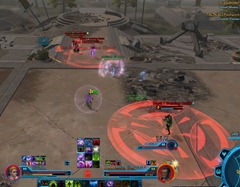 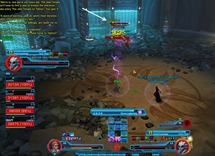 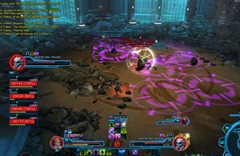 What gear rating is recommended for this flashpoint ?

So any level 49+ gear should work.

Looks like they gave up on Hardmode Flashpoints then

yup catering to casual’s, people still cant clear LI HM after tons of nerfs..so its not surprising hm’s fp’s are gone with the wind.. At least we got NIM DF to work with 😀

It wasn’t the fact that they are catering to casuals, its that the HMs were not played enough.

It’s both. Folks show up to LI HM in various degrees of gear and get smoked because they don’t know / won’t pay attention to mechanics.

Does armor drop in them? same ole 66 prototypes?

Not as easy as Drive Yard, but … needs a hardmode.
I think it will be easy after running it three times (only done it once now).

Last boss is not dropping the relic

A few things to add on your guide:
– 2nd boss:
adds are timed based and stop coming after a few waves. I didn’t kept track when since I got surprised a bit.

About the must kill datacron before channel stops. What happens if you dont kill it? Yesterday I went in blind and only noticed the datacron on the last time he jumped. I was on Macy (saboteur slinger) so I might have killed it by accident. In any case we didn’t wiped neither became close to unhealable.

For the people who want to solo this flashpoint. I had 0 issues clearing trash on my mostly 72 – 168 geared merc healer and a 66 – 156 geared treektank.
Only on the 2nd boss I had issues to clear the adds on time in healspec. I tried a 7/14/25 assault hybrid and got trough it np after the respec.
1st and final boss were very easy.

Is the Korrealis is Bound to Legacy? Or do both versions drop both sides?

When can I talk to the droid? I’m at level 42 and I can’t get the quest from him. Any help?

Dulfy, do you plan on getting the new HM lv 60 flashpoints covered?

i hope so cover at least the bonus bosses in all 4 new HM FPs, or some1 else can do and sent the info to her.

The Major Imos fight on HM is psycho.

So level 60 HM first boss is a pain. Have to do it one add at a time or use the “trick”. The legit way is to all bunch up on an add and break shield with OrbStrike. then go clockwise but its a PITA for your heals. “Trick” is when adds spawn for all but one player to run down just out of range of his orbital strike, yet out of los of the adds blaster fire. That one player will keep the boss from resetting but will dodge orb strikes until adds shields drop. then they bottleneck down stairs and its time to waste em. Rinse, wash, repeat. As far as I know there is no enrage timer. Second boss fight is similar to tac FP but when the boss breaks stealth you (as a healer) must be quick to cleanse his first target or it will surely break even the tank down to ashes. Kill adds then back on boss and of course red (stuff on the ground) = dead. Last boss is easy money just like in tac FP kill the datacrons he jumps to and avoid the falling rocks.

Dulfy, please write the guides on level 60 HM Flashpoints. Interested to learn your tactics for this AoT first boss especially.

ran this with my guild, took a couple times to get the mechanics down. this video shows how we do it since the bug that kept the shields from dropping.

not sure if they’ve fixed the bug, this is so easy we’ve just stuck with it.

Master Oric Traless sure sounds like Liam Neeson’s voice… check it out.

This guide is really incomplete. For the second boss, the trick is to cleanse the debuff as soon as the boss reappears from stealth. The third / final boss is now quite difficult and a huge healing check. It is very difficult to avoid the purple circles, especially with server position-related lag. On the flip side, the bonus boss is quite easy.

Just got in a group doing HM on Lord Goh, its broken. Its not just that its a healing check, but the damage vs health vs healing scaling is broken. Players have around 120k health, heals are around 7-12k depending on ability. There is random damage that seems unavoidable even if you stay out of the circles. Done this fight before 6.0, it was not like this.