Guide updated to live version: Double mine mechanic restored to Corruptor Zero on live but debuff can now be removed immediately.

if you were using any sort of crowd control abilities on the adds, you can forget about them as the adds during the fight are now immune to Crowd control abilities. A couple of DPS that are speced for AoE DPS (i.e. Rage Marauders, Madness Sorcs) are great for this fight to quickly eliminate the adds. Remember to kill repair droids in the back so they don’t heal rest of the adds.

Like in HM, the boss has a ranged and a melee mode, and he switches from one mode to the other every 60 seconds. At the beginning of the fight, he will be in melee mode. In addition to having different abilities during each mode, he also spawns different adds depending on the mode.

While he is in melee mode, the boss will always follow his target, so tanks are able to kite him. However, during melee mode he will spawn ranged adds and the adds will stay in place and attack from there, unless you walk away more than 30 meters or line-of-sight them.

In ranged mode, it is the other way around; he stays in place (but can be moved by going out of line-of-sight). He will spawn melee adds which will automatically run toward their target and will stack automatically.

Unified beams now occur during the fight rather than just near the end of the fight. Immediately after Corruptor Zero lands, past 70% and past 35% HP, he will does a single Unified Beam attack. This mechanic is not hard to overcome and just serve to keep the raid on their toes than anything. This Unified Beam attack seems to trigger a few seconds after Corruptor Zero goes into melee mode.

Corruptor Zero still does his quad Unified beam attack near the end of fight (~35%) and it can be common sometimes to forget that there are 3 more Unified beams when this happens.

The quadrant that Corruptor Zero lands for Unified beams is still random and the best way to tell is by zooming out of your mini map and watch to see where the red dot (Corruptor Zero) lands. 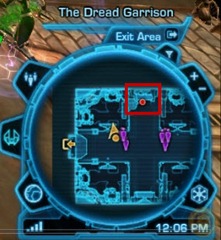 Corruptor Zero now throws out two Concussion Mines to the raid. Along with the Concussion Mine, you will also get a debuff (deathmark symbol) at the same time. Two players with this debuff cannot be near each other or the entire raid instantly wipes. Therefore, you need to have players with Concussion Mines clear them separately. Once the mine is cleared, the debuff goes away.

Players that are far away from Corruptor Zero tends to get preference when it comes to mines. You might be able to use this to your advantage by having only some players getting mines while the rest are stacked near the boss and spread out for the AoEs. 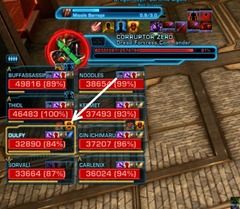 We have a mine clearing order where players at top and to the left of the raid frame will clear the mine first. The second player only run into Corruptor Zero to clear the mine once the previous player is cleared. Those not stacked near the boss should be spread out so they don’t explode the raid the second they get Concussion Mines. 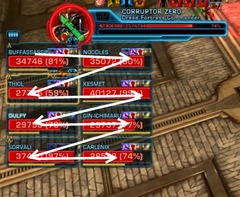 Spread out for Missile Barrage AoEs to minimize raidwide damage. It is easier to see on Nim mode due to the red circles under each player.

will take us at least 100 years to get him down. One of the most annoying bosses in DF and DP on HM already.

In NiM it’s one of the easiest. Only Nefra is easier. It’s much easier in my opinion then it originally was on HM in 72 gear.

is the corruptor blade drop guaranteed or random like HM?

Guaranteed I think, dropped everytime we killed him on PTS and on live. Could be just lucky though