Updated for live release: The DoT from Nefra ticks a lot harder now and can cause some serious raid damage if not cleansed off quickly.

Healer PoV with some explanations of mechanics (Live server video) 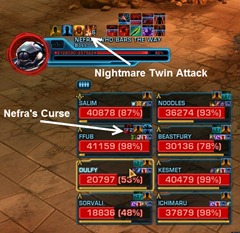 Nefra’s Curse is a stacking debuff applied to the player standing in front of Nefra without main threat (usually the offtank, but could be any melee DPS that happened to stand in front of Nefra at the time). This debuff is applied by Nefra’s Twin Attack, which comes about every 3 seconds. This debuff expires after 10 seconds, unless it gets renewed.

At 5 stacks, this debuff will apply an addition debuff that increase your damage taken by 200% for 10 seconds so you will need to coordinate a tank swap at 4 stacks. Remember that since both tanks have to stand in front of Nefra to split the damage from Twin Attack, it is mainly a main threat swap.

It is possible to survive the additional debuff at 5 stacks with cooldowns and good healers but it is not recommended.

Tanks should constantly perform a tank swap throughout the fight before the debuff gets to 5 stacks. The offtank should always watch his own stacks so he can taunt in time.

Since each tank can taunt every 15 seconds, you can use Taunt on cooldown and swap as soon as every 7.5 seconds. That way, you only get 2 to 3 stacks and have a few seconds room in case something goes wrong.

However, once your debuff is at 4 stacks, you need to Taunt within the next 3 seconds; otherwise the next Twin Attack will put the 200% damage increase on you.

During the fight, Nefra will gain a stacking buff called Nightmare Twin Attack from his regular Twin Attack.. When this buff reaches 15 stacks, he will perform a an attack called Nightmare Twin Attack (1.5s cast). To counter this, have at least 6 players (preferably the entire raid on 8m) to stand in front of Nefra and take the hit (16m raids need 13-16 players).  This will split the damage across the raid. Failure to do so will cause the player closest to the boss to be killed instantly.

The buff will lose its stacks once Nefra perform his Nightmare Twin Attack.

We have the entire raid except tanks stack behind Nefra at 13 stacks and once Nefra reaches 15 stacks, the tanks simply run to the raid and turn Nefra towards the raid to split the damage. 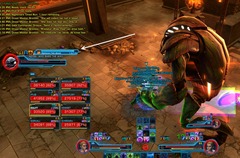 Nefra’s Dot (Voice of the Masters)

Nefra’s Dot ticks extremely hard on Nightmare mode (~ 3k damage every second for 20 seconds) and comes around every 30 seconds. DPS with self-cleanse like Snipers, Mercenaries, Operatives and their Republic counterparts are great on this fight. Avoid too much melee DPS as they cannot self-cleanse and can add a lot of additional raidwide damage.

Intercede/Guardian Leap: A well timed Intercede can be a great help in this fight, considering it requires a tank swap every 4 stacks. It is really easy to use this ability on your second tank while you are main tanking, and will help to reduce their damage taken as much as possible. Keep in mind that it has an aggro reduction component, and as such should be avoided while your other tank has aggro. Ideal timing would be to Intercede/Leap immediately before they taunt, which would generally mean just before their 4th stack. Since they’ll then be taunting off of you, the aggro reduction component is removed while maintaining the damage mitigation to make your healers’ jobs more manageable.

Threatening Scream/Challenging Call Shield: Throughout the fight, you will have aggro on the boss at least once while he is cleaving the raid at 15 stacks, and at least once while he’s not. As such, there are a few ways to utilise the shield. If you have to taunt the boss between 1-3 stacks just single taunt, and depending on your movement skills and the number of melee in your ops group, you can move couple of steps forward, AoE taunt and move back straight away. This will give you the best shot at shielding as many people as possible without endangering anyone. You can also use this method as your initial taunt by running forward before you take aggro and using the AoE taunt as the tank swap, as long as you are comfortable doing so while staying in range of the cleave. The most useful method is to use your AoE taunt when you have aggro and the group is stacked together at 15 stacks. This will shield the entire group, but you should only do it if you are tanking at the time.

Oil Slick/Smoke Grenade: You should maximise your usage of this ability throughout the fight. Using it on cooldown is ideal, since it will benefit whoever is tanking at the time, whether that happens to be you or not. Keep possible movement from droids in mind, and try to make sure that you don’t drop it as a droid is running at you, forcing you to immediately move the boss out of Oil Slick’s/Smoke Grenade’s radius.

Hydraulic Overrides/Hold the Line: Don’t overestimate this ability for this boss fight. While it will help you to move out of droid AoE faster, there is ample time to move without bonus movement speed, and moving faster than your other tank can cause you to be the single target of a cleave. Obviously, that’s bad, and you should only use it when you need to catch up in an emergency.

Force Shroud/Resilience: You should be saving this to cleanse yourself when you receive the dot. Make sure your healers know whether you will be cleansing the first or second dot rotation to avoid cleanse overlap.

Force Speed: Similar to Hydraulic Overrides/Hold the Line, you should only use this in emergencies when you need to catch up quickly. Sprinting out of a droid explosion will often leave your other tank behind, killing whichever of you has aggro at the time by taking the entirety of the cleave damage.

Ideally, your raid should be stacked behind the boss while the healers are fanned outwards to attract the droids as they spawn with heal aggro. However, if your healers aren’t comfortable with this or are unable to maintain the required healing and movement simultaneously, they can swap out with some ranged DPS who can aggro the droids instead.

The raid will mainly take damage from the Voice of the Masters debuff. It is important that you have DPS that can cleanse the debuff themselves; if a healer needs to cleanse more than 2 players, you risk that a tank dies because of a Twin Attack. Tanks should be cleansed first so that they don’t lose too much HP before the next Twin Attack. While it is possible to just let the debuff tick through on a single player, this will remove ~80% of a player’s HP and this player needs to be topped off before the debuffs are given out the next time.

Since your raid should, for the most part, be stacked together, revivification/salvation makes this fight much easier to manage, as does the self-heal made available to Sorcerers/Sages. Since you will likely be cleansing yourself last, being able to prioritise cleanses knowing that you can instantly heal yourself helps to minimise the damage the rest of the raid will be taking.

This is a great fight for Operative/Scoundrel healers. Evasion/Dodge and high mobility work fantastically with the fight’s mechanics. Stealth rezzing is particularly difficult due to consistent add spawns and dot application, so you should be careful with your timing, and knowing whether your other healer can solo while you’re out of action for so long is particularly important.

Your shield CD and Kolto Overload/Adrenaline Rush during emergencies allow you to take an enormous amount of dot damage without having to worry about yourself. Maintaining the healing and armor bonuses on your tanks, and as much of the raid as possible due to stacking, also helps make the fight easier.

This fight is essentially a tank and spank. Exceptional DPS is not required, so prioritising your self-cleanse is of particular importance if you have one, and staying alive should be an easy task as long as you’re paying attention.

Self-cleanse: Operatives / Mercs / Sorcs and their Republic equivalent can assist with cleansing the raid if necessary, as well as using Force Shroud/Resilience and Evasion/Dodge to cleanse yourself off-GCD.

Utility Abilities: Cloak of Pain/Rebuke while the dot is active (you should make sure your healers know to cleanse you last if you’re doing this, since you’re also taking less damage)

Dropping Ballistic Shield/Scrambling Field should prioritise covering the tanks, not the raid

Ranged DPS can take initial aggro from droids when they spawn to minimise required raid movement, however this option depends on your group makeup and strategy

Since this fight lasts less than 5 minutes due to the enrage timer, it is recommended to use Bloodthirst/Inspiration once the boss is below 30% HP when every class can use their execute ability.