SWTOR Boston April 11 Cantina Tour flashdrive files. Special thanks to Jedi Lucifel from the Pax Dominus/Imperius guild on the Ebon Hawk server and Daekleyri from Harbinger for sending me the files.

Selkath NPC Species and a new Wookie NPC who will play a critical role in the Forged Alliances story line later this year. 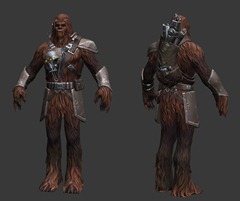 For a second I thought the next playable species would be Selkath, I was all like “whaaaaa…..?”.

Well, the Cathar were a NPC Species at first too, now they are
playable. We’ll see … wouldn’t mind playing a Selkath Trooper, though.
😛

Bothan seems likely. We have one in Kuat and we always hear of them wanting to reuse work they completed. The hair looks good on the Bothan.

Drooling hardcore for 2.8 on the PTS.

(As long as there aren’t any goddamn firaxas.)

I’m really afraid that we’ll be fighting Firaxan sharks now that we have Selkath…
Everyone get your sonic emitters warmed up.

Regarding the price, they were very specifically didn’t say a price, just “how much do you have?”

Rather, “How much does your guild have?”

I was at the event. We were also told that The Black Talon Crash bug will be fixed. Plus, they seemed unaware of the clickable pazaak table in The Esseles that did nothing when clicked. It seems likely that it’ll get a codec entry. (I suggested that a codec could be added. 🙂 )

Please let that wookiee replace our ship droid, just as its wearings suggest.

Lol, that would be cool 😉

Is that Selkath darkside corruption? They grow barnacles? :p

Both the Selkath and the Underwater gear thing up in the pictures make me think, that we might see an waterplanet soon 😀 maybe it’s just my hope, because I’d really love to see Mon Calamari or Manaan in the game. But it would be awesome

Selkath the next playable race! Who would’ve saw that coming? 😀

It says it’s an NPC Selkath, not a playable race.

I know, just thought it would be funny to be able to play as a Selkath much like the Ithorians in SWG before it’s unfortunate closure 🙁

Voss is next race.I think that Selkath gonna be new “nautral” companion as they said. Just look at that pic, it looks more like customizations than random NPCs.

The selkath are going to be apart of the next flashpoint.

Theres a bug right now on the live servers. If you have a lower level toon you can talk to the forge alliance astromech droid and gives you the first convo on part 2. Which takes place on Manaan.

nice, i just checked it out myself. I really think manann will be next.. i remember that planet from kotor, it was a cool one

I hated manaan and the selkath.
But to each his own.

I just had an idea. What if your stronghold had some kind of minigame you could play… and it rewarded you some kind of currency that you could use to buy legacy armorings with set bonuses for your companions?

If i’m seeing this correctly, I’m looking at 2 guards posted at an entrance to the Nar Shaddaa Stronghold, which, I do not know why, according to my feelings is a wondrous thing and if my sith can have troopers there, i’ll love the thing more and more… oh why…

Wow, nicely noticed. That would be cool

Was there a Q&A thing?

THEY SHOULD MAKE SELKATH PLAYABLE, PERIOD – IT’S AN AWESOME SPECIE.

“Species” is both the singular and the plural form.

I bet you feel pretty empowered, don’t you? Correcting someone’s mistype as if they didn’t know the word was species. You and all of the other grammar police on the internet should go fuck yourselves. You were beat up and picked on your entire school life for a reason.

Was your mom killed by your english teacher or some shit? Calm down.

I have dyslexia. I work hard to keep my grammar and spelling proper.

It pisses me off when people are too lazy to spell properly.

What if I tell you… that in your perfect world free of spelling mistakes, somebody’s native language isn’t English. Imagine that. Or imagine learning some crazy non Galactic basic language such are Slavic, with weird looking characters such are ћшђжљип
Correcting people’s spelling on the interwebs is stupid and pointless… similar to wining Special Olympics… you might win but you are still a retard…

You are an idiot,he’s not trying to correct anyone, he’s just saying that pisses him off because of his condition. Do you even know what dyslexia means? And omg… that joke, besides not being yours, is so 2006…

Please tell me the droid head on the wookie’s chest talks.

Well, it is possible it’s supposed to be a translator droid. It’s seen before in the Expanded Universe, where Chewbacca’s nephew Lowbacca had a translator droid named Em-Tedee, that Chewie and Threepio had made 🙂

I have a Gand character in the Edge of the Empire RPG that uses that gimmick to talk (protocol droid head hanging on his chest). I feel slightly robbed.

If the Droid’s Named Kuato … I un-subbing SWTOR …LOL

So the average Wookie can live for over 400 years if I remember my lore correctly and beside Revan cheating old age and death there are just a few KOTOR characters that might have survived until SWTOR. So could this Wookie be Zaalbar? Or maybe his son?

Probably depends on how old Zalbar was to begin with. As you said, it’s the average wookie who turns 400, but that can both mean older and younger than that.

It would not surprise me if they took Zalbar in as well. But it would be better if they took a different wookiee in. There’s not that many wookie characters in the game 🙂 would be great to put more names to them 🙂

Mad props to Musco for putting up with that guy who kept licking him.

Also… musco is a sexy beast but was slightly salty… giggity

If they’re adding a bunch of Selkath NPC models, plus the “Underwater Adventurer” sets, it certainly points to them adding Manaan as a new planet we can visit. Manaan is the sole source of kolto, which seems like a pretty likely focus for any story set there: control the kolto, control the galaxy.

If you talk to the “forged alliances” droid with a character under lv 55, like maybe lv 38 or something. There is a bug where it will allow you to still have convo with it. The last phrase T3-G2 says (republic side) is..”T3-G2: Theron Shan location = Manaan // You = travel cautiously + watch for tails!” Im sure this goes for the Imperial side also. So check it out for yourself. I believe Manaan will be the next planet added to this game.

There are already Selkath NPCs in the game.

I’ll be at the Vancouver Cantina May 16th, I’ll make sure to try and get some flashdrive files for you.

Cool looking forward to it! It is the first time they came to Canada. Too bad I am on the east coast.

You’re from the Can!
Oh, Canada. Oh, Canada…

Because preview. Also they let you play complete for free, but yea ‘gimme lots of money’ they say.

Hey Dulfy or Anyone can you answer me this question: is the story where it includes Wookie and Selkath come in 2.8? Atleast a part of some story? I hope it does.

how long do wookies live?….. could that be zaalbar from kotor?! O_O

Chewie lived to be 225, and that wasn’t from natural causes, so could be! But it did appear in the Boston Cantina Drive back in April, according to sources.